Yunnan is rich in mineral resources with immense reserves. Of the 140 kinds of minerals mined throughout the world, 112 kinds may be found in Yunnan. Lead, zinc, tin, phosphorus and copper are five minerals with the largest reserves in the province, while the reserves of lead, zinc and tin are the largest in China. Mining in Yunnan has been going on for many centuries.

Yunnan Province（云南省） referred to as Dian or Yun（滇或云）, is located in the southwest border of China. Archaeological materials prove that as early as 1.7 million years ago, primitive humans such as “Yuanmou people” lived in Yunnan, which is one of the important regions of human origin and has a long history. The administrative construction and regionalization of Yunnan has gone through a long and complicated evolution process. It is bordered by Sichuan and Tibet in the north, Guizhou（贵州） and Guangxi（广西） in the east, Vietnam（越南）, Laos （老挝）and Myanmar（柬埔寨） in the south and west respectively, lying between 21°9 ‘-29 °15’ north latitude and 97°31 ‘-106 °12’ east longitude. It covers an area of about 394,000 square kilometers and has a population of 36,972,610, among which ethnic minorities account for about one third. By the end of 2017, Yunnan Province had 8 municipalities under its jurisdiction, eight autonomous prefectures, 67 counties, 29 autonomous counties, 16 county-level cities and 17 municipal districts.

Yunnan（云南） is rich in both metallic and non-metallic minerals due to its complex geological structure. Coal is the most widely distributed nonmetallic ore, Permian carboniferous is the most important in Paleozoic coalfield. Mesozoic coalfields mainly occurred in Triassic, and Cenozoic coalfields occur in the tertiary strata, mainly brown coal. The phosphate rock was formed in the group of Meishu Village（梅树村） in the early Cambrian. Rock salt（岩盐）, potassic salt（钾盐）, gypsum（石膏） and other nonmetallic minerals were formed in the Mesozoic. The metal ore is mainly non-ferrous metal ore, with many kinds and large reserves, especially Gejiu tin ore, Dongchuan（东川） copper ore and titanium ore whose reserves are among the best of the country are famous in the world, which is known as the “kingdom of non-ferrous metals”. Its shape is greatly influenced by Yanshan（燕山） movement. Iron ore is formed in early metamorphic rocks and also in neritic sedimentary iron ore in devonian sandstone（泥盆系砂岩）.

The metallurgical industry is mainly engaged in the mining and smelting of nonferrous metals and is an important production base of nonferrous metals in China. Gejiu（个旧） tin mine is well known in the world and its output ranks the first in China, enjoying the reputation of “Tin-Capital”. Dongchuan（东川）, Yimen（易门） and Yongsheng（永胜） are the main copper producing areas. The copper produced at Dongchuan（东川） copper mine is silver in color and is called “Yunnan copper”. Lead and zinc mine of Lanping（兰坪） has large and concentrated reserves, high grade and easy mining, and large smelting scale. In the steel industry, steel, pig iron and steel production are the fastest growing, and small materials are basically self-sufficient. The Kunming iron and steel plant near Anning（安宁） has grown into a medium-sized steel complex that includes mining, iron-making, steelmaking and rolling sectors.

[Tin ore/锡矿] Tin ore of Yunnan concentrated in Gejiu（个旧）, Wenshan（文山） and Baoshan（保山） areas. There are 8 proven large and medium-sized mines in west Yunnan, and is expected to build new tin bases.

[Lead and zinc/铅锌] Lead and zinc ore is mainly distributed in west Yunnan and south Yunnan.

[Tungsten ore/钨矿] Tungsten ore is mainly distributed in south Yunnan and west Yunnan. Except for Malipo（麻栗坡） and Zhongdian（中甸） tungsten mines, most of them are associated ore with low grade and difficult to use.

[Nickel ore/ 镍矿] Nickel ore is mainly distributed in southern Yunnan. Because 76% of the reserves are nickel silicate, and smelting technology has not yet up to standard, it is temporarily difficult to use.

[Titanium placer/钛砂矿]  Titanium placer is concentrated in Kunming（昆明） and Baoshan（保山） area. The super-large titanium placer discovered in Wuding（武定）, Luquan（禄劝） and Fumin（富民） near Kunming is of high grade and easy to be picked up, with geological reserves of 14 million tons, which is one of the best resource prospects in China at present.

[Gold ore/金矿] Gold ore is mainly distributed in western Yunnan and southern Yunnan, and three large gold deposits which located in Mojiang（墨江）, Zhenliu（镇流） and Yuanyang（元阳）, have been proved.

[Platinum-group metal ores/铂族金属矿] There are 6 kinds of platinum-group metal ores, such as platinum(铂), palladium(钯), osmium(锇), iridium(铱), ruthenium(钌) and rhodium(铑), which are distributed in central Yunnan and western Yunnan. It has metal reserves of 4,743 tons of indium(铟), 7776 tons of thallium(铊) and 179,500 tons of cadmium(镉), ranking first in China. Germanium(锗) 1112.78 tons, ranked second in China. Beryllium (铍)(mineral content) was 36,400 tons, zirconium(锆) (mineral content) was 194,600 tons, and strontium(锶) (celestite, 天青石) was 3,573,100 tons, ranking the 4th in China. The types of ores, except strontium as a single deposit, phosphide, monazite and zircon as placer, are all associated or symbiotic components of nonferrous metals, most of which have not been developed and utilized at present.

[Phosphate ore/磷矿] Phosphate ore is mainly distributed in central Yunnan and around Dianchi Lake（滇池） in Kunming（昆明）.

[Salt mine/盐矿] The Anning（安宁） large salt mine near Kunming city, with large thickness and high grade, is suitable for large-scale water mining. Within 60 square kilometers, the prospective reserves of sodium chloride are 13.089 billion tons and mircanite 6.248 billion tons, making it an ideal salt chemical base. 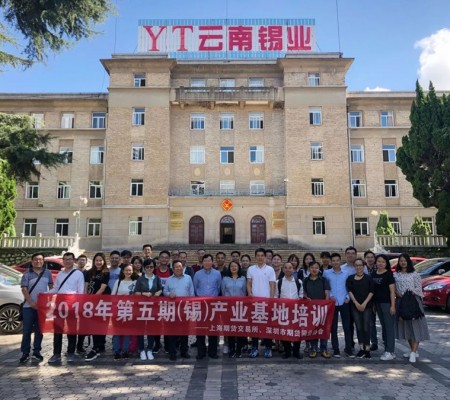 Yunnan Tin Group (Holding) Company Limited (YTC) is the largest tin producer and exporter in China and the world. It is headquartered in Kunming, Yunnan. It involves in the production, processing and export of tin metal, and also for the production of tin-based and arsenic-based chemicals. It was...

Yunnan is rich in mineral resources with immense reserves. Of the 140 kinds of minerals mined throughout the world, 112 kinds may be found in Yunnan. Lead, zinc, tin,...