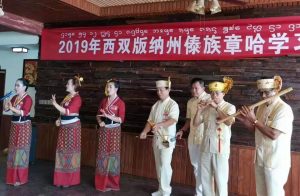 Zhangha is the most popular traditional art form of Dai people, which plays an irreplaceable role in Dai social life. Its singing range is very wide, every New year of Dai people, closing the door festival, opening the door, worship the god, Buddha, congratulations on the new house, marriage, children full moon and other occasions, we have to invite Zhang ha to sing.

Zhang ha(章哈), also translated as Zanha, means that the person who can sing, which not only refers to the singer, but also the artistic performance form Dai singers’ singing traditional tunes. Mainly spread in Xishuangbanna Dai Autonomous Prefecture and the Dai and some Bulang villages of Jiangcheng, Menglian, Jinggu counties of Simao City.

Solo, duet and competitive singing. According to the different accompaniment instruments, it can be divided into two forms: one is accompanied by Dai string instrument “Ding(玎)”, the singing content is mostly folk songs and love songs, expresses the deep love between younger man and woman, which is called “Hasading(哈塞定)”and the other played with Bi(筚) which called “Hasabi”(哈赛筚). 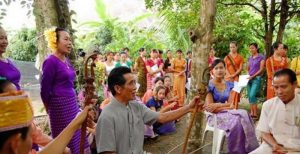 Zhangha has many repertoire, preserves many Dai nationality’s oldest traditional ballads, myths, legends and so on, and creatively develops the Dai nationality poetry art, enriches the Dai people’s spiritual and cultural life. Zhangha plays an important role in enlightening children, advocating social ethics and morality, publicizing production knowledge and so on in the social life of Dai nationality. Dai families have always regarded Zhangha singers as the most knowledgeable people and compared them to “indispensable salt in life” and “fragrant flowers”.