Xishuangbanna climate and weather is characterized by the combination of continental and oceanic climates with an annual average temperature of 18-22℃ (64.4-71.6℉). This page will give the detailed information about the four seasons of Xishangbanna, as well as what to wear during the Xishuangbanna travel.

Graph of Average Temperatures and Precipitation by Month 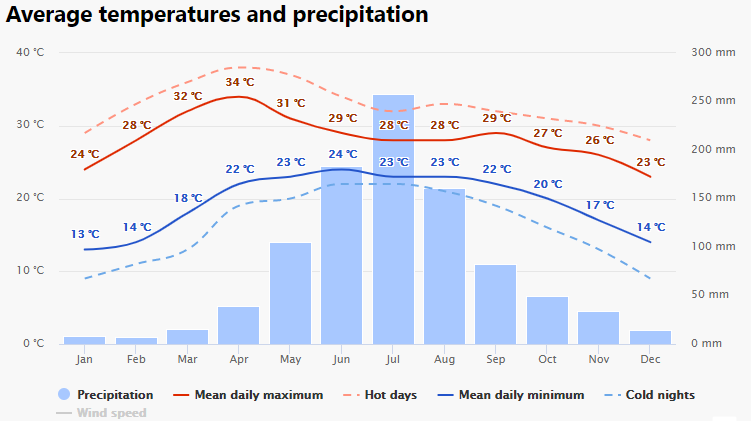 From the chart, we could know that the hottest days occur in April and May, while July in summer is endowed with plenty of rainfalls, cooling down the hot weather.

Chart of Sunny Days by Month 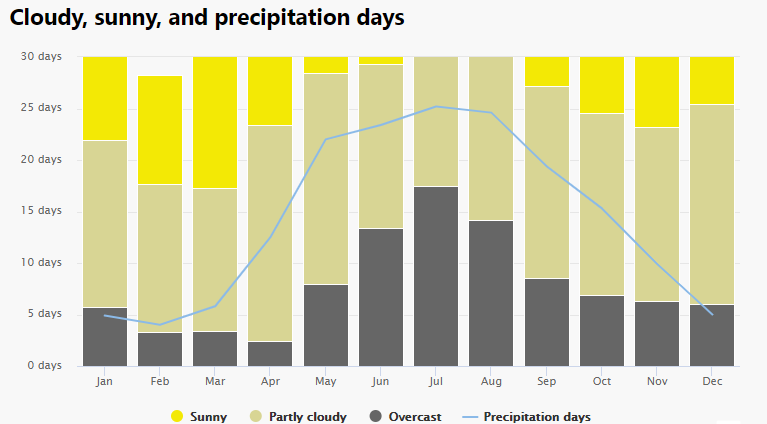 Winter and early spring are the seasons with plenty of sunny days, also in the dry season of Xishuangbanna. Jan, Feb and March enjoy the most of the sunny days of the year around.

Four Seasons of Xishuangbanna & What to Pack

Here are some weather facts of Xishuangbanna:

Be sure to bring enough T-shirts and shorts for the warm weather. A jacket is also necessary, because it will be a little cold in early morning and late night. Sandals must be prepared. Sandals are worn almost every day when you get there, and sneakers are needed if you join a hiking tour.

The best time to visit Xishuangbanna is during the dry season (from November to April), when the weather is agreeable and the temperature is mild. Dry season is also the peak tourism time of Xishuangbanna, especially April, for the Water Splashing Festival is celebrated in April. If you would like to taste the various tropical fruit here, traveling during the rainy period from June to September is a good choice.

Xishuangbanna Weather and Climate in July When you travel to Xishuangbanna in July, rain season is from May to October each year in Xishuangbanna. In July, it is a period...

Xishuangbanna Weather in May

Xishuangbanna Weather and Climate in May When you travel to Xishuangbanna in May, rain season is from May to October each year in Xishuangbanna. In May, the Southwest Wind...

Xishuangbanna Weather and Climate in June When you travel to Xishuangbanna in June, rain season is from May to October each year in Xishuangbanna. In June, the southwest monsoon...