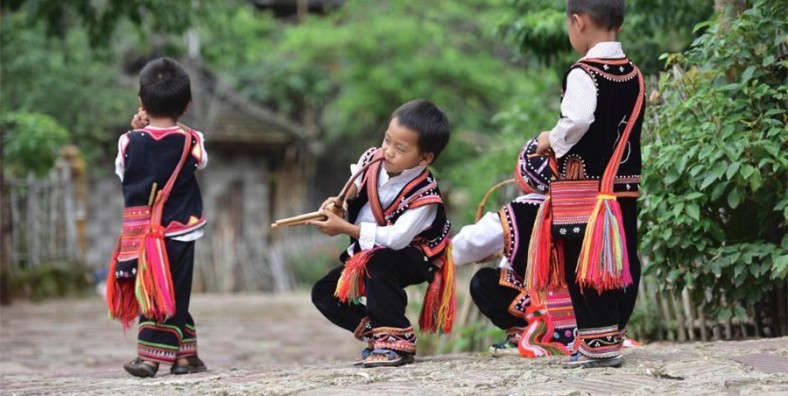 Laodabao Village(老达保寨), located in the southeast of Lincang County,  is 42KM from the county.  It is a typical Lahu Village with all the 114 families/473 villagers are Lahu People.

Laodabao Village is one of the villages that have inherited the Lahu’s Creation Epic”Mupa Mipa”(《牡帕密帕》) which has been selected as the first batch of national intangible cultural heritage protection list in 2006. As the land of singing and dancing, it is famouse for cappella with rich harmonies and being the hometown of ‘Happy Lahu’. Villagers are very welcoming and will show you their gracious hospttality with songs and drinks once you step into the village.

People in Laodabao can sing and dance, over 200 of them could act on stage. Lahu music and dance performed in Laodabao are of passion and creativeness. Boys around 13 or 14 can play Sheng and perform Lusheng Dance, girls can sing and perform Bai Dance. Singing skills in Laodabao include traditional singing and multi-chorus  Christian songs sang in Lahu language. Although there is no formal vocal training, some of the villagers could not even read opern, they can sing in 4 chorus, in the past the polyphonic are sang only in the church, not to be explored for a long time until 2004 national and folk traditional culture survey.

Ya’er Folk Art Troupe’s performances are of traditional Lahu cultural characteristics, as well as the inclusiveness to absorb foreign and contemporary culture. Since 2005, they’ve given performances in different scales of shows.

What to see in Laodabao Village 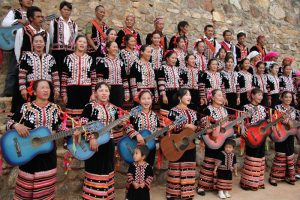 Laodabao Village, with well-preserved primitive sceneries, is very natural and beautiful. You can peer at their ethnic customs and profound history from their traditional pole and column buildings in the village since it is the village which has preserved the most intact Lahu’s traditional cultures throughout the time. Beyond the beautiful sceneries, ethnic customs and historical cultures, the biggest highlight here is the local people – they can get you away from the daily weariness and troubles by their happy songs and dances, so that to fully appreciate their daily lives and happiness.

The song ‘Happy Lahu’ , with simple melody and light rhythm, is very easy to learn, you can try to sing and dance with local people. Lahu People, no mater men and women, young and old, can both sing and dance very well, they are very good at Lusheng Dance, Baiwu Dance and cappella with rich harmonies while the most stand-out is singing with a guita. Approximately 80%  of the villagers can play the guita, the oldest player is over 70 years old while the youngest one is just little kids. Although, they have never been trained, most of them hardly know nothing about the musical notation, they have created many popular songs in the virtue of their enthusiasm towards music and their daily lives. They have wrote nearly 300 songs and the most popular ones include ‘Happy Luhu'(快乐拉祜)，’Truly Love You'(真心爱你) and ‘Happy New Year'(新年在一起), etc. The ‘Happy Luhu’ once helped them gain the reputation of ‘Happy Lahu win the world with only one guita’.

Past, Now and Future

However, Laodabao is a typical  remote and poor mountain village in the past. With badly infrustructure, villagers used to walk to contact with the outside, get water from the well, light the nights by oil lamp and yell to exchange messages. Under such a poor production and living condition, the evarage annual income was only 1715 RMB.

In recent years, in the advantage of the abundant Lahu ethnic cultures, Lancang County has designed a characteristic road for Ladaoba-to construct a tourist ethnic village. As one of the villages that have inherited the Lahu’s Creation Epic”Mupa Mipa”(《牡帕密帕》)  and the most intact Lahu cultures, most of the villagers are good at singing and dancing, among them includes 6 inheritors of traditional and ethnic cultures. With all these advantages, villagers have established sevaral art troupe such as ‘Laodabao Art Troupe'(老达保雅厄艺术团), ‘Five Bros'(达保五兄弟) and ‘Dabao Sisters'(达保姐妹). They have been invited to perform in  many cities at home and abroad, take part in many famous TV Shows including “Meili 12″(魅力12),”Xing Guang Da Dao”(星光大道),”Minge China”(民歌 中国),”I Am Going to the Sping Festival Gala”(我要上春晚) and “Dream Chorus” on China Centrel Television(CCTV), and also join many well-known folk and tourism festivals. With all these efforts, they have brought the Lahu culture to the whole world and make their hometown a popular tourist destination. 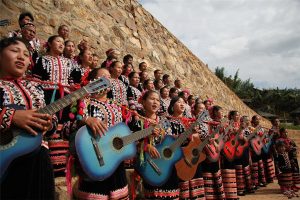 In 2003, Ladabao has founded its own perfprmance art company – Lancang Laodabao Happy Lahu Performance Limited Company(澜沧老达保快乐拉祜演艺有限公司). It is the first performance company that founded by local villagers in Puer. Over 200 villagers are performing for the company, and when there is no performance, they spend their time doing farm work. Up to now, over 600 performances have brought an income of 3.32 million yuan and villagers have shared a bonas of 2.26 million yuan, the total tourism revenue reaches 5 million yuan. At the same time, Laodabao has been listed as the core area of the ‘HALEJA Country Music Town’ which was built by the Puer municiple government with a total invest of 5.03 billion yuan. With promising prospect, we believe that Laodabao will get better and better in the future.