Yunnan is rich in tea, and it has a wide variety. From the large-leaf varieties of sun-dried teas to the national treasure-level Puer Tea, and to the various types of green tea and flower tea, it can be described as a grand view. The most unusual thing is that Yunnan’s tea can not only be drinked, but also the main raw material for cooking! Let’s see the Yunnan Tea Food which you can have a try during your Yunnan travel.

Pu’er tea can not only be used for dishes, but also for making cakes. The cakes made by Pu’er tea have good taste and are easy to digest. When making cakes, most of them are mixed with tea soup and dough, because the color of Pu’er tea soup is chestnut red and rich, and the cakes are often red. There are also a few cakes made of crushed tea leaves mixed with flour.

Fragrant and flavorful tea eggs are a traditional Chinese food. The original recipe uses various spices, soy sauce, and black tea leaves. In the traditional method of preparation, eggs are boiled until they reach a hardened, cooked state. The boiled eggs are removed from the water, and the entire shell of each egg is gently cracked all around. The cracking method is the formal feature in this traditional egg recipe. After about ten minutes, the cracked eggs are ready to be put into the prepared spiced-tea liquid and simmered over medium heat. For best results, the eggs should be allowed to steep for at least several hours.

The ethnic minorities in Yunnan have the custom of eating pickled tea, which is called tea vegetables by the locals. After the rainy season, the girls would go to the mountains to collect fresh tea leaves, wash them and dry them. After that, the girls knead the juice, add spices such as pepper, salt, etc., and put them in the earthen pot for curing and storage, then take them as you eat. The pickled tea leaves can be stored for several months. In the local area, people regard pickled tea as a dish. They think that pickled tea is an essential thing in life. In the hot summer, when people have a bad appetite, a bowl of rice with a small plate of pickled tea is enough to make people have a big appetite.

The tea leaves is required to be fresh and tender. After being picked, it should be washed, kneaded by hand and put into a bowl. Add lemon leaves, garlic, anise, pepper, salt and other seasonings, put in meat or vegetable ingredients, add some cold boiled water and mix well, then it can be used for food. There are different ingredients in different seasons, but there will be no less acid and spicy. Such as lemon cold tea, Carrillo cold tea, dry cold tea and so on. Cold tea is widely eaten in Xishuangbanna, Pu’er and Lincang areas of Yunnan Province, and there will be some differences.

Pick big buds of fresh tea leaves with three leaves, wash and take water out of the pot; twist several tea leaves together into strips; use dustpan and other tools to dry the water; when the tea is half dry, fry and eat it. Note: do not use too much water for tea; do not use too high oil temperature. Put salt and pepper on the crispy leaves, or wash the fresh and tender tea and fry it directly. Fried tea is crispy, cool and sweet.

After washing the fresh and tender tea leaves, drain the water and cut it into pieces; open the egg liquid in the bowl, put the tea leaves into the bowl and stir evenly; heat the oil in the pot, and then put the tea eggs when the oil reaches 70% of the heat; stir quickly in medium heat, put some salt, and then put it out of the pot. In order to keep the original flavor, no other ingredients are needed.

Soak the pig’s elbow in tea soup (without tea leaves), remove the smell of oil, and then stew it in the pot. Or add all kinds of sauces directly into the tea soup, and then put the pork elbow into the pot to slowly stew. Until the pig elbow is stewed, the tea fragrance enters the meat. The greasy elbows and the Pu’er meet here, which can not only relieve the greasiness but also add tea flavor.

First, make the best jasmine tea; put the rice, sausage, bacon, taro and shallot into the special bamboo tube, then pour the tea into the tube, and steam for about half an hour. The fragrance of rice, tea and bamboo is endless. 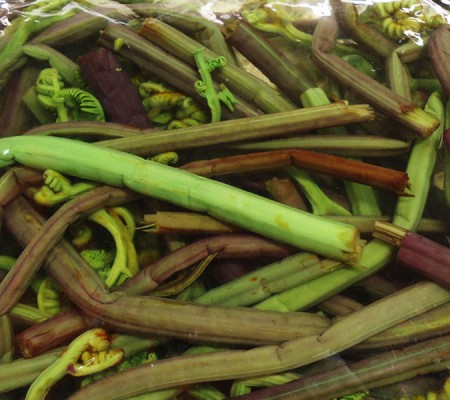 Called juecai (蕨菜) in Chinese, fiddlehead ferns are some of the most ancient edibles on the planet. They can be found in almost every country in the northern hemisphere and come in many...