“Wooden beams, pillars and rafters; wooden doors, windows and floor slabs; wooden houses easily catch fire, so the owners must not be careless…” Zhao Fukun sang, accompanied by a three-stringed instrument. He was wearing the traditional costume of the Bai ethnic group and singing a song about fire safety.

Living in Xizhou, Dali Bai Autonomous Prefecture, Zhao Fukun has adapted many other Bai ethnic Daben ballads. By combining fashionable contents with traditional tunes, he has blazed a path for passing on the singing and story-telling art of the Bai ethnic group.

“Daben ballads are unique to the Bai ethnic group,” Zhao Fukun said. “The balladeers tell stories in the Chinese language and sing in the Bai language.”
“I can adapt the Daben ballads because of my father Zhao Piding,” said Zhao Fukun. Modern media such as television and the internet have had a huge impact on Daben ballads, so he and his father had to think of a way to preserve this folk art. 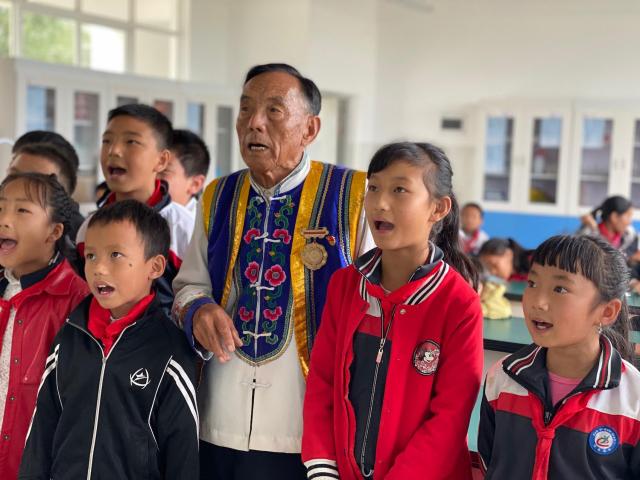 In their village, government notifications and policies were often read out in the Chinese language, which was not well understood by the villagers. To solve the problem, Zhao Piding and his son began to convert some notifications and policies into Daben ballads. In 2016, when Dali City was trying to curb the pollution of Erhai Lake, Zhao Piding created two new Daben ballads, titled Erhai Lake of the Past and Protecting Erhai Lake, which soon became popular among the villagers.

The Bai ethnic group traditionally celebrates the Gwer Sa La Festival with Daben ballads. In 2008, after this festival became a Chinese national intangible cultural heritage, Zhao Piding was designated as its representative successor.