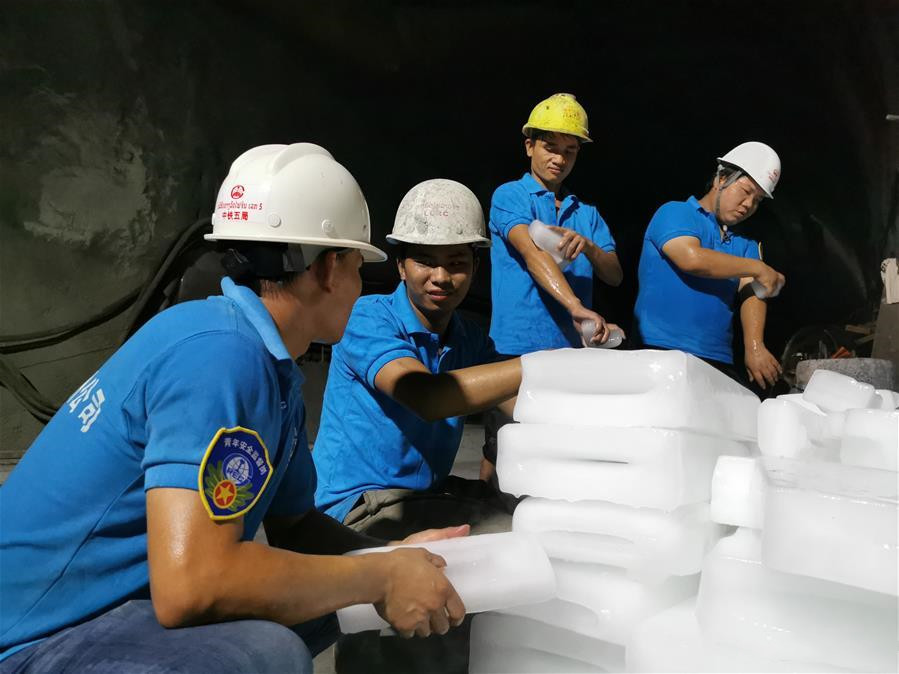 Rainy season in the Namor District of Oudomxay Province, some 400 km north of the Lao capital Vientiane, is relatively cool in late July, while at the Ban Konlouang Tunnel construction site, located inside mountains there, Chinese workers are sweating.

The 9,020-meter Ban Konlouang Tunnel is the second longest tunnel along the China-Laos railway in northern Laos, which is constructed by China Railway No. 5 Engineering Group (CREC-5).

With harsh geological conditions of faults, underground rivers, water inrush and mud, the tunnel construction site is known as the “Geological Museum”.

The construction has been listed as a key bottleneck of the railway project.

At the construction site, heat waves erupt from the depth of the tunnel, hitting incomers of the tunnel. In the steamer-like tunnel, even standing still, people can feel sweat dropping down.

When the reporter went into the under-construction tunnel in late July, Wang Hong and his Chinese colleagues were kneeling on an ice pile made up of dozens of large ice blocks.

“The happiest thing in this stuffy tunnel is to take a 10-minute rest on the ice pile,” Wang Hong said, smearing the sweat off his face. “Without the ice, I really don’t know how to continue with the job.”

According to Wang Hong, the average temperature in the tunnel exceeds 45 degrees centigrade.

In order to keep cool inside the tunnel and create a better construction environment for the workers, the CREC-5 project management has purchased an ice machine, only for providing some five tons of ice every six hours to cool down the construction sites.

“Look, so much water can be squeezed from my clothes,” the man, in his 40s, said with a light smile, adding that working in the tunnel for 10 minutes will turn the clothes into a “raincoat”, and working at this environment is prone to serious rheumatism.

Wang Hong, who has been participating in tunnel construction since 1999, has worked in more than 20 tunnels. He said the Ban Konlouang Tunnel of China-Laos railway is the hottest tunnel he has ever worked on and also the tunnel with the most difficulties.

Even so, Wang Hong and his team workers have set a record along the China-Laos railway for the monthly excavation length–186 meters.

After a 10-minute rest, Wang Hong and the workers drank their full kettles of water and then left the ice heap for the tunnel, while another group of Chinese tunnel workers have came.

In the evening, back to the dormitory with Wang Hong and his fellow workers, the reporter found the first thing they did in the dormitory was turning on electric blankets. Although it is relatively cool during rainy season in the year, the temperature at night in Oudomxay can also be around 25 degrees centigrade.

It can not said to be cold, but why do the Chinese tunnel workers turn on the electric blanket?

It turns out that in the rainy season, continuous precipitation not only brings coolness but also dampness. Workers need to prepare electric blankets and spend an hour or so every day to dry up their sheets and quilts.

According to Wang Hong’s team worker, Qiu Liping, they are working in the daytime in the tunnel, so they have to prepare electric blankets, instead of dry up the sheets and quilts in the sun.

Qiu Liping said that when waking up in the morning, he can see small drops of water on the quilt because of the recent heavy rains.

“Although the conditions are difficult, joining the Belt and Road construction makes me feel proud. Not only have I enriched my knowledge, but also improved my professional skills,” said Qiu.

Being the first overseas route connecting with the railway system in China using Chinese technology and equipment, China-Laos railway is a major project in infrastructure inter-connectivity between China and neighboring countries, and a major project in implementing the Belt and Road Initiative.

The China-Laos railway has a length of over 414 km with bridges of 62 km, tunnels of 198 km under construction, linking Mohan-Boten border gate in northern Laos and capital Vientiane. Operating speed on the route is designed at 160 km per hour. 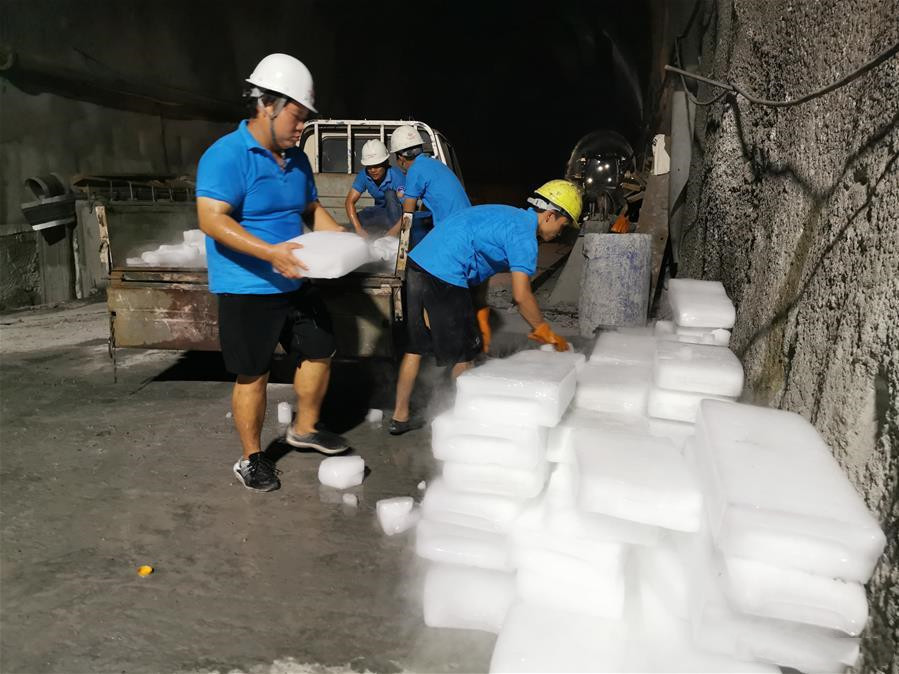