Baka is 100 percent Jinuo minority community located in Jinghong of Xishuangbanna Prefecture, south of Yunnan. With convenient traffic, it is 42 kilometers from Menglun Town in Mengla County to the east and 20 kilometers from Mengyang to the west. As one of six mountain hills of Pu’er Tea, over 18,000 diligent and brave Jinuo people reside here. Stepping into Baka Village, you can vividly feel the features of the “childhood of human beings” dating back to millions of years ago. The village is hidden amidst the dense tropical rainforests but with terrific sceneries.The mountain villages are built on the top of the mountain or at half mountainside. Surrounded by the forest, it has unique tropical rainforest sights. Around is the national nature reserve, you can fall across various animals and hear the singing of birds when traveling in the mountain villages.

Jinuo people there have maintained their traditions of architectures (stilted houses) and other aspects. Jinuo people have a long history of thousands of years; unlike many other groups, it ushered in Socialist Society directly from primitive world in 1950s, and thus became the last identified minority group in China. They live in bamboo buildings hidden among green leaves. In their own language, Jinuo means “the ethnic group that respects the uncle”. Jinuo clan lives in the unique bamboo building that looks like a Kongming hat. Many villous amomum fruits and tea plants are planted on Jinuo Mountain. Jinuo nationality has their unique customs, from the sixth day to the eighth day of February is the grand Temaoke Festival. 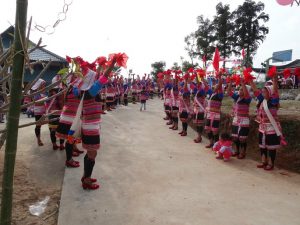 A countryside museum is established with it to exhibit relics and inherit traditions as well, thus is regarded the first one of its kind in China; it mainly presents different aspects of Jinuo’s culture including the folk residences, life by hunting and collecting, slashing and burning, weaving and embroidering, songs and dances, and religion stuffs, etc, though which one can better understand the mysteries of Jinuo people.

As many other minority groups do in Yunnan, Jinuos also spend assorted traditional festivals.

Blacksmith Day: As the grandest festival of jinuo, it’s spent in Lunar December and lasts couple of days. In the morning of the first day, a butchering ox ceremony goes first, and in the afternoon the elderly from the village would kick off the ox-hide drum dance which turns out to be primitive and boorish; this is the Sun-drum Dance for celebrating bumper harvests.

As the most sacred sacrificing utensil and musical instrument, the Sun-drums are usually gendered; they (drums) are regarded as avatars of Gods and symbol of villages. By offering sacrifices to Sun-drums, Jinuo people believe they will for surly be rewarded with flourishing population and bumper harvest in the future.

Temaoke Festival: it’s spent from lunar Feb 6th to 8th; Sports games are played among villagers; Sun-drum dance would be performed as well.

In addition, other festivals are also taken, such as Torch Festival on lunar Jun 24th, New Rice Festival, etc. Anyway, these festivals will add to your fun if you are bound for Baka Village.