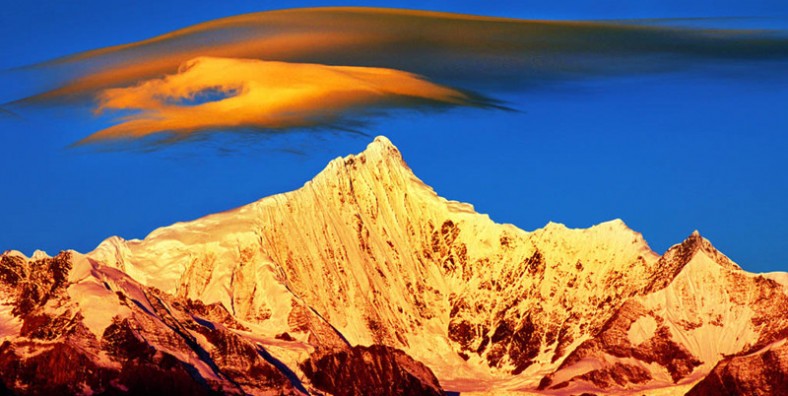 Meili Snow Mountain is one of the most sacred mountains of Tibetan Buddhism. It boasts numerous snow-clad ridges and peaks, thirteen of which are more than 6,000 meters above the sea level. Kawagebo Peak, the highest in Yunnan Province, has the most splendid view rising about 6,740 meters.

Why is Meili Snow Mountain So Special?

Where is Meili Snow Mountain – Location

Meili Snow Mountain is located 10 kilometers (6.2 miles) northeast of Deqin County of Yunnan Province, sitting on the border of Yunnan Province and Tibet. It lies close to the northwestern boundary of the province and is bounded by the Salween River on the west and the Mekong on the east. The Meili are subrange of the larger Nu Mountains, themselves a constituent range of the Hengduan group.

Legend says that originally Kawagebo was a demon mountain. After eight plagues and disasters, the Padma Sambhava, the founder of the tantric sect, finally conquered kawakbo mountain god. Thus he was enlightened by Padma Sambhava, and he accepted precepts for laypeople, converted to Buddhism. Kawakbo is the head of the eight sacred mountains and lead the other sacred mountains to maintain the harmony and tranquility of nature.

►By plane: Fly directly to Shangri-la city (Zhongdian), and then take a local bus to Feilai Temple in Deqin County, which is the best jumping off point to view Meili Snow Mountain.

►By scheduled bus: There are regular bus routes to Feilai Temple from a number of nearby destinations: Kunming, Dali, Lijiang (albeit, via Shangri-la), and Shangri-la itself. 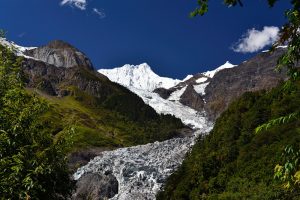 The Meili Snow Mountains is a holy land of pilgrimage for Tibetan Buddhists. It is a multi-religious Tibetan area with Tibetan Buddhism as the main body and co-existence of Catholicism, Christianity and Islam. In 1268, the founder of the reincarnation system of Tibetan Buddhism living Buddha, Karma Pakshi made a pilgrimage to kawakbo and determined the route of the Inner and Outer Circumambulating Pilgrimages around Meili Snow Mountain. Thousands of devout pilgrims from Tibet, Qinghai Province, Sichuan Province and Gansu Province worship together and encircle the holy mountain Pilgrims, making this mountain more mysterious.

What to See at Meili Snow Mountain?

Sunrise/Sunset: The golden sunrise on the dramatic snow-capped peaks of Meili Snow Mountain is a must-see for most tourists who want to admire the spectacular scenery of this mountain.

Glaciers: There are four big glaciers at Meili Snow Mountain: Mingyong, Sinong, Niuba and Nongsong. The longest and the largest glacier is the Mingyong Glacier. 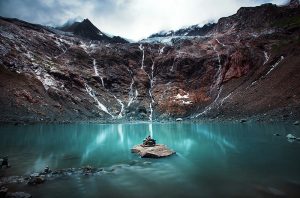 On the National Highway No. 214: Tourists could see a panoramic view of Meili Snow Mountain on the way.

Feilai Temple Viewing Platform: It’s the perfect place to take a panoramic view of 13 peaks and enjoy the sunrise and sunset view, which is always the first stop for travellers to the snow mountains.

Wunongding Viewing Deck: This deck is located 15 kilometers south of Deqen County seat on the G214. There are 13 white towers and an open valley against the backdrop of the snow mountains. 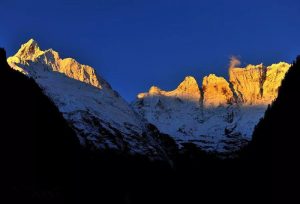 The ideal seasons to visit Meili Snow Mountain are in the winter and spring periods between October and May. The best season is after the end of October, when you can view the main peak because of the nice weather, clean air and the high transparency there.

However, in other seasons, to see the main peak you have to depend on your luck. You are more likely to have a chance to see the snow-covered mountain in the early morning when the sun has just come out.

In order to meet the golden sunrise of Meili Snow Mountain, it’s highly recommended to stay here for one night. There are many guesthouses and hostels around Feilai Temple, most with viewing decks for tourists to enjoy the spectacular scenery of the sun shining over the snow mountains.

► Check with the hotel or guesthouse whether there is water for shower before checking in it for its lack of water in this area.

►  Feilai Temple is the best vantage point from which to view Meili Snow Mountain.

►  It is difficult to see the mountain in its entirety during summer and autumn, due to heavy cloud cover or mists.

► The ultraviolet rays are strong and you may need to bring something anti-sunburn.