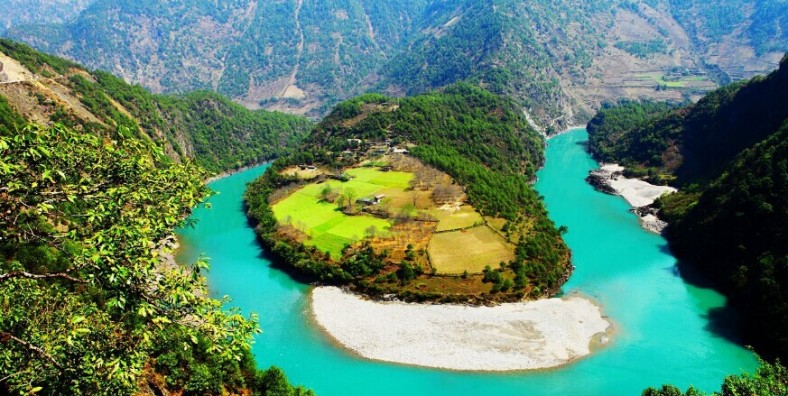 The Nujiang (Nu River) Great Canyon is a spectacular 315 kilometre long marvel of nature in northwest Yunnan province in southwest China. The Chinese call it the Grand Canyon of the East.

Best Time to Visit: October to next April

Why is Nujiang Grand Canyon So Special?

Nujiang Grand Canyon is the longest and most mysterious, precipitous and unsophisticated canyon in the world, which goes southeast from Yarlung Tsangpo Grand Canyon in south-north trend. The part in Yunnan reaches a length of more than 300 kilometers and a average depth of 2000 meters. The deepest part is located in Bingzhongluo, known as ‘Grand Canyon of the East’. The spectacular Nujiang Grand Canyon and the roaring Nujiang River thrill and shock the travelers.

Where is Nujiang Grand Canyon – Location

Nujiang Grand Canyon is located Nujiang Lisu Autonomous Prefecture, northwest of Yunnan province. From the point of view of China map, it is just at the position of “chicken ass”. Nujiang river originated in the foothill of the Mount tunggula in Qinghai-Tibet plateau, via Yunnan, from north to south and then go into Burma (called the Salween river in Burma), then enter into the Indian Ocean, the whole length is more than 1540 km.

How is the Nujiang Grand Canyon formed?

The Nujiang River surges forward between Gaoligong Mountain and Biluo Mountain. The altitudes of all the mountains beside the two banks are over 3,000 meters. As the drop height of the river is high, the river water is rapidly rushing and the wave is high, forming a very spectacular sight. There are many steep cliffs at both banks. Flowing toward the south with an annual water amount of 1.6 times that of the Yellow River, the river is impinging against the banks and thus forms the steep Nujiang Grand Canyon. 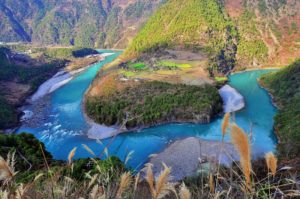 Along the Nujiang Grand Canyon, there are a few minorities live in Hushui County, Gongshan County and Fugong County, such as Lisu nationality, Nu nationality, Dulong Nationality and Zang nationality. One cannot imagine people living on such steep inclines. Most mountain inhabitants live in wooden sheds and huts built on the side or even the top of the mountain.Villages on the other bank of the river are accessed either by narrow hanging bridges constructed with small wooden planks strung together with rattan tied to trees; or by sliding on overhead cables that span the river. The cables are tied to trees on either side of the river and to cross, one is suspended from a rope loop attached to a harness worn around the waist.

As affected by the southwestern monsoon climate of the Indian Ocean, Nujiang Grand Canyon forms a special climate that there are four seasons in a same mountain and the weathers are different within five kilometers. It is a common phenomenon that the trees are verdant and green in the river valley that is sweltering as in summer, the flowers are in full bloom and the grasses become yellow on the sidehill, and the mountaintop is the world of ice and snow as in winter.

Nujiang river within the territory of Nujiang county is more than 310 km, due to river east has Biluo snow mountain (has more than 20 peaks are 4000 meters above the peak), river west has Gaoligong mountains (also has more than more than 20 peaks which are 4000 meters), Nujiang river flowing between these two mountains, on both sides of the mountain is magnificent, all in the 3000 meters above sea level, deep valleys, big river fall, and the rapid water form a 310 km long, 2000-3000 meters deep canyon area. On upper Nujiang grand canyon–Qinatongnakaluo, the snow mountain in the both side is 5000-6000 meters high, the river at an altitude of 2000 meters high, 3000-4000 m elevation difference, because the mountain bold, river rushing, sparsely populated, this section of the canyon appear depth, become the perfect place for adventure tourism.

The scenery is magnificent. Almost too good to be true. But there it is before your eyes: overwhelming memories of other beautiful places you have seen with its colour, scale and grandeur. Farms and villages mottling this riverine wonderland which is home to Nu, Lisu, Drung, and Tibetan minority people. Forests, streams and waterfalls adding their particular features to the bigger picture.

There are a few alternatives to get to Nujiang Grand Canyon. From Kunming, one can catch a bus to various places in the Gorge.

At least one sleeper bus winding all the way to Fugong in the middle of the gorge. The trip is about 14 hours(710km).

Renting a car to visit Nujiang Grand Canyon is more convenient. Yunnan Exploration Travel can provide the service for our clients with the good vehicle and skilled driver. 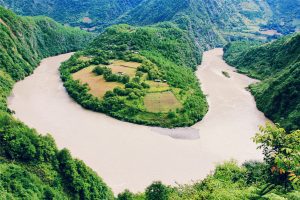 From October to April is the best seasons to visit Nujiang Grand Canyon, especially in the spring time when the mountain flowers are in bloom. The Nujiang river in Spring Festival is the most beautiful season when the Biluo Snow Mountain is covered with white snow, and the water of the Nujiang river is gentle whose color is like jasper. Summer is hot and rainy.

The principal towns in the Nujiang Grand Ganyon include Liuku, Fugong, Gongshan and Bingzhongluo. The most beautiful part of the Canyon starts from Bingzhongluo. Liuku is an unpleasant town with ugly concrete buildings can definitely be ignored. Fugong is mainly populated by the Lisu tribe. The scenery between Fugong and Gongshan is fabulous with lots of steep slopes and waterfalls.

Liuku is the capital of Nujiang Prefecture. There are many guesthouses and the accommodation conditions are quite good. Fugong county and Gongshan county also can provide accommodation for tourists. Or you can live in the farmer’s house.

Gaoligong Mountain National Nature Reserve
It runs through the southern section of Hengduan Mountains from south to north. Covering a total area of 120,000 hectares with forest coverage of 85%. It is characterized by its natural landscape of biological and climate vertical belts, various types of vegetation, and a great variety of plants and animals. 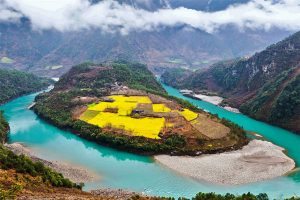 ►Due to the inconvenience of transportation, the best traveling way is car-rental.

► If you go to visit the Dulong river or Qiunatong village, prepare walking shoes.