Yunnan food is a series of cuisine with bright feature of ethnic minorities among the Chinese cuisine, a product combined the food tradition of 25 ethnic minorities with that of Han ethnic group.  Twenty-five ethnic groups living in colorful Yunnan have formed their own unique dietary customs in different natural environments. Let’s see the Ethnic Delicacy and Cuisine in Yunnan.

The majority of the Achang people live in Yunnan, which is one of the earliest inhabitants in Yunnan. The Achang people like to eat taro. It is said that dog meat and taro are essential in ancient harvest celebration. Fish farming in paddy fields is the main source of daily fish consumption. Fresh fish are often fried in oil, cooked or steamed with water and pickled pepper. The most distinctive feature of the fish is the hot and sour Rice Fish (the fish growing in the paddy fields).

Nu nationality is one of the ancient nationalities in Yunnan, mainly distributed in Yunnan Province. Nu people call themselves “Nusu”, “A Nu” and “A Long”. Nu people are used to eating two meals a day. Maize is the main staple food. Tea drinking of Nu nationality is a kind of lacquer tea imitating Tibetan butter tea. It is often used as a supplement for pregnant women or the weak. Typical foods are: Pipa meat, chicken stewed with lacquer, roasted mutton, lacquer tea, Gudu wine and so on.

Poultry and livestock are the common source of meat for the Pumi people, such as pork, cattle, mutton and butter, milk cakes and other dairy products. Typical foods are: braised Pipa meat, drunk chicken, bamboo leaf vegetables fried tomatoes, etc.

Lahu is a unique minority in Yunnan Province. “La” means tiger. “Hu” means roasting meat to a fragrant degree by the fire. In the past, Lahu people lived in dense forests and hunted for a living. After liberation, they gradually moved out of the forest and lived in agriculture. From the word “Lahu”, we can see that this is a nation famous for its barbecue. Lahu barbecue has a unique flavor, most of which are hunted wild animal meat, or directly roasted with fire, or buried in the fire with banana leaves, cooked and eaten. Typical foods include Lahu barbecue, vanilla roast beef and so on.

In the course of long-term historical development, Shui people gradually formed the characteristics of eating glutinous rice food, fish, hot and sour food and drinking wine. Among them, fish is an indispensable delicacy for the them to worship their ancestors and entertain guests, while fish package leek, cooked in a unique way, is the first dish of the Shui people, with strong national characteristics and peculiar cultural connotations.

Lacquer-stewed chicken is a traditional food loved by Lisu people living in Nujiang Gorge. When friends from far away or New Year’s Day comes, Lisu people will cook this dish to celebrate the festival and entertain distinguished guests. Lacquer trees and lacquer paints are abundant in Nujiang Lisu Autonomous Prefecture, which can be used as edible lacquer, chemical raw materials and medicines.

Five-color flower rice is red, black, yellow, white and purple. Flower rice is a kind of natural green food with bright color, rich fragrance and delicious taste. It is a special product of Buyi people. It is said that it has a history of nearly 900 years. The traditional production of primitive Buyi rice is hand-made. The process is complex with many steps.

Dulong people mainly live in Dulong Valley in Gongshan, Yunnan Province. Bee pupae is one of the most exquisite dishes among Dulong people. It is said that there are more centenarians of Dulong nationality, which is related to the frequent consumption of bee pupae. The typical food of Dulong people are potato, roasted chicken and Jimi.

The Bulang are descendants of the Pu people in ancient times. They were called “Pu Zi Man” in Tang Dynasty and “Pu Man” in Yuan, Ming and Qing Dynasties. Because of their different habitats, they used to call themselves “Pu Man”. After the founding of New China, they were collectively called “Bulang” according to their national wishes. Drinking tea is another hobby of the Bulang, and they are good at making tea. Bamboo tube tea and sour tea are unique to the Bulang, and people often make sour tea as a gift for relatives and friends.

It’s called “Gunya Buhuan” in Wa language. It is a delicious dish for Wa people to welcome guests. It can serve both meals and dishes. It’s much softer than ordinary rice and drier than porridge. There are two ways, one is to tear chicken meal by hand, and other to cut chicken with knife cut. The making method is unique. The chicken with fresh black bones is cut and cooked in a pot with new millet rice, then add fennel leaves, green pepper, spices, Awa coriander, onion, garlic, spices, mint and other spices. Its color is bright, the taste is waxy, smooth and fragrant.

The Yi people are distributed in Yunnan, Sichuan, Guizhou and Guangxi Zhuang Autonomous Region. They are called “Nuosu”, “Misha”, “Luoluo”, “Sani”, “Asi” and so on. After the founding of the People’s Republic, they took “Yi” as the unified national name. Typical foods commonly eaten by Yi people are buckwheat, paste pickled vegetable, boiled suckling pig in white water, etc.

Yao nationality is a typical mountain nationality in southern China. Yao people call themselves “Mian”, “Jinmen”, “Bunu”, “Laga”, “Bingduoyou” and so on. Because of the differences in economic life, living areas and clothing, there are more than 30 appellations. Yao nationality has a large population and there are unique flavor food everywhere. Typical foods are: Camellia oleifera, rice dumplings and Hebaozha.

Bai people mainly live in Dali Bai Autonomous Prefecture, Yunnan Province. Bai people’s raw skin is the traditional guest dish of Bai people in Dali area. The custom of eating raw skin began in Nanzhao period, and has been loved by people up to now. Where Bai people live together, some people must eat raw skin. Bai people eat raw skin, unlike in Central Yunnan and southern Yunnan, they use straw fire instead of soupto burn off the hair, so it has the reputation of “fire-burning pigs by Bai nationality”.

The Tibetan people regard tea as a god’s thing, from “Zanpu” to temple lamas, from Chieftain to ordinary people, because milk and meat account for a large proportion of the food structure, while vegetables and fruits are less, so Tibetans eat with tea, which are indispensable in a meal, and there is a saying that “it is better to have no food in three days than no tea in one day”.

Miao’s sour soup fish is a delicacy summarized by the Miao people in their long life. Because of its simple preparation method, delicious taste, appetizing after eating and delicious soup, it has now extended to sour soup chicken, sour soup duck and so on. In recent years, sour dishes have come out of the deep mountains of Miao, and become a unique catering landscape in many large and medium-sized cities, and have become more and more popular.

For thousands of years, the Mongolian people have lived a nomadic life of “migrating by water and grass”. They live in grasslands and live on animal husbandry. Horse milk, hand-picked meat and roast mutton are their favorite drinks and treats in daily life. They depend on milk and meat for every meal. Milk and cream are used to make a variety of beverages, as well as cheese and similar products.

Zhuangs are the most populous ethnic group in China and the indigenous ethnic group in Lingnan. They are good at roasting, frying, stewing, pickling and brine ripening, drinking, spicy and sour taste, and eating crisp and coriander dishes. They have many famous dishes and snacks, mainly horseshoe, raw fish, roast suckling pig, waxy rice, Ningming Zhuang Rice-pudding, Zhuangyuan Chaibao and so on.

In the thirteenth century, a large number of Muslims migrated to China from Central Asia and merged with the local Han, Uygur and Mongolian nationalities. During the long history, Hui nationality gradually formed through intermarriage and other factors. The typical food of Hui nationality includes Muslim Wanshengma cake, mutton gluten, Jinfeng pickled chicken, Wengzi Tangyuan and mung bean skin. 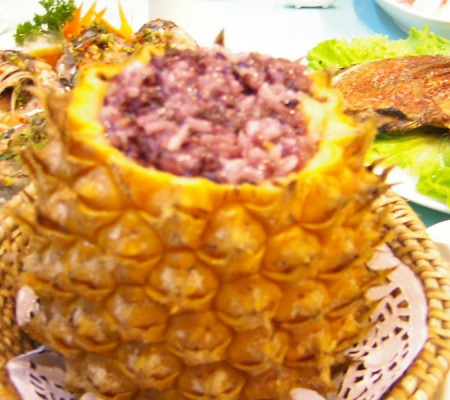 Boluo fan (Chinese: 菠萝饭; pinyin: bōluófàn) or pineapple rice is a method of preparing rice for consumption that is used by the Dai people, a Tai cultural group residing in southern China. It is an authentic Dai ethnic dessert with glutinous...