Mosuo people in Yunnan are part of the Naxi ethnic group, one of China’s 55 ethnic minorities. Mosuo people live near Lugu lake, at an altitude of nearly 2,700 meters above sea level. Lugu lake is surrounded by mountains, with Yunnan province to the west and Sichuan province to the east. Around the lake, there are over a dozen Mosuo villages.

The appellation of the Mosuo people is recorded in numerous historical records with various homophones and different characters. Maoniuqiang(牦牛羌) or Maoniuyi(牦牛夷) was called in the records of the Historical Records and the Book of Han. Ancient Mosuo people are nomadic people, called the people of herding yak. During the warring states period, Qiong, one of the headmen among Qiang tribes, migrated southwards with his people in order to avoid threat of Qin state, and moved to Gansu and Sichuan, and then migrated to Yuesui (today’s southeast of Xichang in Sichuan and other areas). Then the Mosuo continued to move south to Dingzuo, that is, today’s Sichuan Yanyuan, Yongning, Lugu lake area.

The Mosuo people have their own language but no written characters. In order to protect the culture of the Mosuo ethnic people, all their schools are bilingual, teaching children in both standard Chinese and Mosuo language. According to a local official, the people seem to be happy to learn from and imitate others, but they are inevitable losing some of their own tradition in the process. The purpose of bilingual education is to help them meet national educational standards on one hand, and to recognize their own language as a valuable asset on the other.

Mosuo ethnic people live in the northwest of Yunnan, at the Lijiang’s Lugu Lakeside on the junction of Sichuan and Yunnan, with a population of about 50,000. Lugu lake is famous for its unique Mosuo culture and beautiful landscape. The Mosuo people mainly live in the Ninglang County of Lijiang City in the east of the Jinsha River, as well as Sichuan’s Yanyuan, Muli and other counties. With the territory of Ninglang county, Mosuo people mostly inhabit in the Yongning dam by the lake.

The Mosuo minority has its own language and culture, the most special one is their ‘walking marriages’. The concept for marriage, love, women, man and family is quite different from the traditional ones in other parts of China.

In the Mosuo villages, the male will take the responsibility of raising his sisters’ children rather than his own. When he grows too old to work, children will be cared for by his nephew. The size of a Mosuo family varies, but a family normally has about 10 people. Some families may count as many as 20 or 30 members, but there is always a female as the head of each one. She is the most capable woman in the family and is highly respected by the others. She has both an honorary status and an important responsibility, as the entire family counts on her to make the wise decisions in handling family affairs.

One of the best known aspects of Mosuo culture is its practice of “walking marriage” (走婚 ), although this practice remains poorly understood. Walking marriages are the most prominent form of marriage in Mosuo culture; however, it is not unheard of for women in Mosuo culture to marry outside of their culture, therefore participating in marriages other than walking marriages. In a walking marriage, both partners live under the roof of their extended family during the day; however, at night it is common for the man to visit and stay at the women’s house (if given permission) until sunrise. Therefore, they do not technically live in the same household, but they are free to visit when granted permission. Children of parents in a walking marriage are not raised by their father. The brothers of the mother (maternal uncles) in the marriage take on the responsibilities of the father since the father isn’t typically around during the daytime. Due to the separation of the father and mother, it is crucial for the uncle(s) to play a large role in the development of the child.

The Mosuo ethnic people are good at singing and dancing. The most popular type of dance is called “Jiacuo dance”, which means dancing for good time and beautiful dance. Mosuo folk music and dance are part of traditional culture. The instruments of the Mosuo people are flute, Hulusheng, Suo Na, drum, cymbals, hand bell, jew’s harps, etc. Among these instruments, the flute is the most commonly used.

Luoshui village, the largest Mosuo village around Lugu Lake, has pretty much become a tourist town. As more and more people come to visit from the outside, many of the residential houses along the lake have been converted to shops, hotels and teahouses. People can taste homemade fruit wine in Mosuo homes or simply have a cup of coffee or tea in a teahouse overlooking the lake. Local Mosuo people also share their daily lives with tourists in activities such as fishing and boating, while in the evening, visitors are invited to participate in the festivities as they dance around the bonfire. 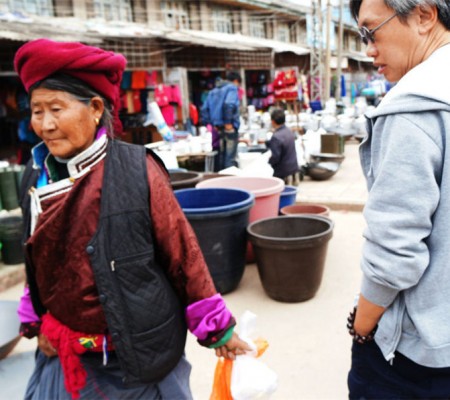 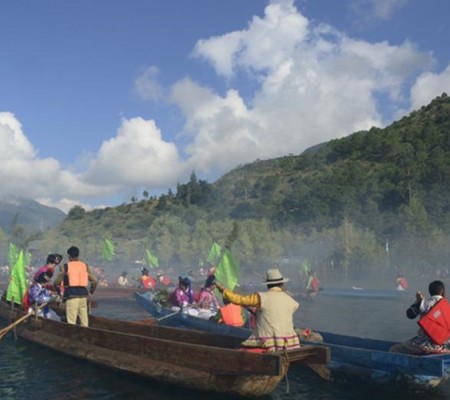 Jiacuo Dance(甲搓舞) is the traditional dance of the Mosuo Ethnic Minority, who live in the mountains of Lugu Lake of Yunnan province. It is one of the Intangible Cultural Heritage in Yunnan,...

Lijiang Mosuo Museum for Intangible Cultural Heritage in Yongning Town, travel guide introduces the main attractions, entrance tickets booking, The best time to visit, How to Get there, the... 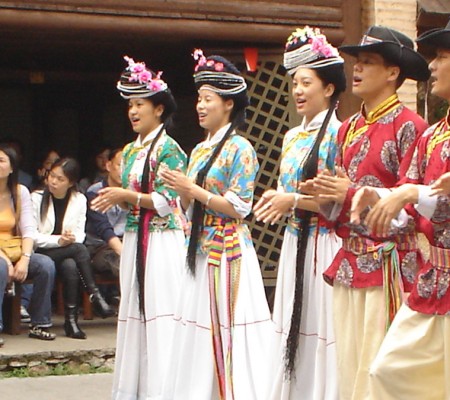 Plan your Kunming Ethnic Villages Tour to Kunming? Visit Village of Mosuo Ethnic People in Yunnan Ethnic Villages in Xishan District, Kunming which is one of the most fascinating...