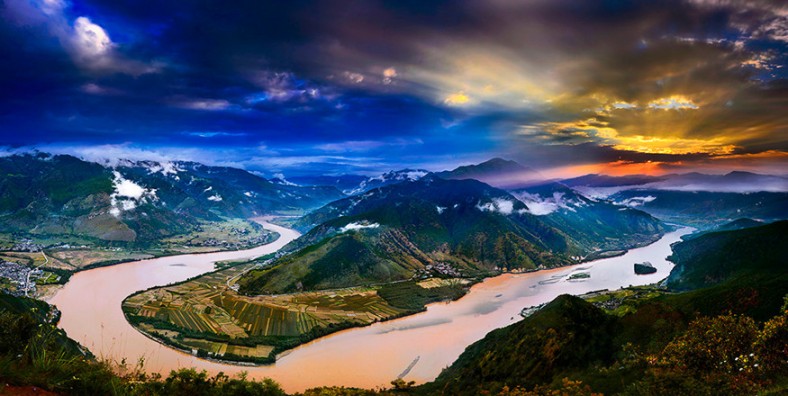 Three Parallel Rivers Natural Reserve is a UNESCO World Heritage Site, which lies within the drainage basins of the upper reaches of the Yangtze (Jinsha), Lancang (Mekong) and Nujiang (Salween) rivers, in the Yunnan section of the Hengduan Mountains.

Why is Three Parallel Rivers Natural Reserve So Special?

Three Parallel Rivers Natural Reserve is a UNESCO World Heritage Site, a nature reserve extending over 170,000 km2 within the undulating mountains of northwest Yunnan Province. It is the combination of seven geographical features over eight geographic regions. The whole reserve is composed of the drainage areas of the three great rivers – Nu River, Lancang River, Jinsha River, and the mountains around. It is a very rare phenomenon that the shortest distance between the Lancang River and Jinsha River is only 66 kilometers and between the Lancang River and Nu River the distance is less than 19 kilometers. It is also the inhabiting place of 16 ethnic groups. Different nationalities, languages, religions and customs co-exist, making it a special and unique region rarely seen in the world.

About the Three Parallel Rivers

The Mekong runs through a gorge 310 km long. It crosses both Cambodia and Vietnam, and is the source of much of the food supply in both countries. The Yangtze River is China’s largest riverand the world’s 6th biggest. It stretches from here through Chongqing and Wuhan and ends at Shanghai. The Salween is important for the livelihood of the ethnic people in Burma and Thailand. The river valley in Burma is known for its beauty, and it flows to the Indian Ocean.

The Three Parallel Rivers of Yunnan Protected Areas is representative of landscapes demonstrating the Earth’s evolution over major geological time periods and bio-evolution at important phases. In ancient times, as a result of the collision between India Plate and Eurasian Plate, the Qinghai-Tibet Plateau was ballooned up, creating the parallel mountains and rivers within a length of 150 kilometers, including the Dulong River, Gaoligong Mountain, Nu River, Lancang River, Yunling Mountain and Jinsha River in this area. Therefore the natural sceneries here are quite unique not only in China, but also in the world.

The natural scenery of Three Parallel Rivers is located at the deep narrow valleys in the mountainous areas of the southern part of Qinghai-Tibet Plateau, in southwest China’s Yunnan Province. On this piece of land, there are high mountains, deep valleys, snow-capped peaks, large glaciers, lakes with potable water, wild forest, marshy grassland, rare animals and precious plants.

The height of snow-covered mountains in this area varies from 2,000 meters to 6,000 meters, and there are over 100 snow-covered mountains higher than 5, 000 meters, with Meili Snow Mountain as the top one. The deep gorges of Nu River Gorge(eg. Oriental Grand Gorge), Lancang River Gorges and Jinsha River Gorges(eg. Tiger Leaping Gorge) are particularly famous. There are 20% Higher Plants and over 25% more animals in this area including Yunnan golden monkeys, antelopes, snow leopards, Bengalese tigers and black necked cranes. 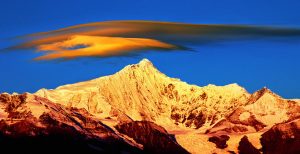 Its demographic make-up also is highly interesting as it contains many of the twenty-five minorities found in Yunnan province including the Derung, the smallest of all of China’s minority groups. Some of the other minorities found in this region are the Tibetan people, the Nu people, Lisu, Bai, Pumi and Naxi. Many of these minorities still use traditional costumes as their normal daily attire.

How to Get to Three Parallel Rivers Natural Reserve

Lijiang is easily reachable since becoming a popular tour destination at the end of the 1990s. Tourists can take flight, train or coach getting there. More info please refer to Lijiang Transportation.

With a small regional airport, Shangri-La mainly relies on its roads as the main means of transportation. Tourists can take the flight or coach getting there. More info please refer to Diqing Transportation.

To Nujiang Prefecture:
Tourists need to get to Liuku in Nujiang Lisu Autonomous Prefecture first, and then take the local bus to Fugong, Gongshan and Bingzhongluo Village. This itinerary gives visitors a chance to explore the Nu River Gorge. More info please refer to Nujiang Transportation. 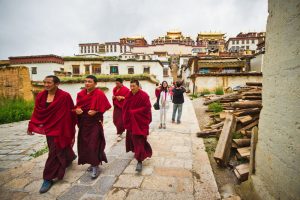 Nujiang Area
There are much to see or to do in Nujiang. Minorities in Nujiang is the most diverse in China and the population of minorities is the largest. The main attractions include Nujiang Grand Canyon, Bingzhongluo scenic Area, Gaoligongshan Mountain, Dulongjiang valley, etc.