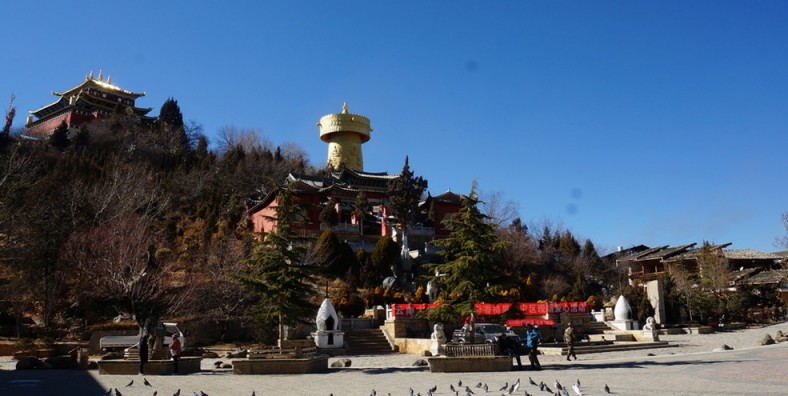 Dukezong is a Tibetan town in Shangri-la County, Deqin Tibetan Autonomous Prefecture, Yunnan. As the largest and best-preserved Tibetan residence groups in China, it is over thirteen hundred years old, which not only plays an important role in the Old Tea - Horse Road, but also serves as a corridor connecting Chinese and Tibetan language, people, religion and cultures.

Why is Dukezong Ancient Town So Special?

Dukezong is a Tibetan town in Shangri-la County, Deqin Tibetan Autonomous Prefecture, Yunnan. As one of the largest and best-preserved Tibetan residence groups in China, it is over thirteen hundred years old, which not only plays an important role in the Old Tea-Horse Road, but also serves as a corridor connecting Chinese and Tibetan language, people, religion and cultures.

Where is Dukezong Ancient Town – Location

Situated at an altitude of 3,200m above sea level, Dukezong Ancient Town, 700km from Kunmin, located in the Shangrila City.

The pronunciation of “Dukezong” in Tibetan has two meanings: Castle built on Stone and Moon City. In Tang 676AD – 679AD, the king of Tubo established Shenchuan Chief Military Commission in Weixi, and set up Guanzhai in Daguishan Mountain with numerous stones, named Dukezong.

According to the Tibetan Buddhist scriptures, there is a lost city named Shambhala in the snow mountains, shaped like an eight-petal lotus flower; so Dukezong Ancient Town is laid out in this design. During the construction, the craftsmen found a type of local white clay can be used as the coating of house facades so created the white house wall we can see today. Covered in the bright moonlight, the old town takes on a silver sheen on clear nights, hence the name “Moonlight City”. 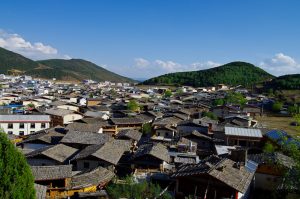 For those Horse Caravan who pass through the ancient tea-horse road, Dukezong ancient city is the important tea-horse interchange trade thoroughfare of Yunnan, Sichuan and Tibet, and also the last stop of Old Tea – Horse Road.

From the ceaseless up-and-down undulations of paved roads, you can still find the faint imprints. In 1688, when Dalai Lama requesting mutual trade in Jinsha River, the Qing government granted to set up market in Shangri-La; since then Dukezong has become an important trade market of Yunnan-Tibet where many merchants gathered and mining industry boomed.

During the Anti-Japanese War, the Japanese aggressors occupied Burma and cut off Burma transportation, a large number of material assistance can only arrived in Kunming across the Himalayas from Lhasa by northwest Yunnan, the county also became a transit point to Yunnan, Tibet and India trade.

In 2001, Dukezong was approved as a famous historical and cultural town in Yunnan province. In January 2014, a fire lasting over ten hours broke out destroying most of the town. A number of cultural relics, precious Thang-gas and Buddhist artworks were burned in the fire, plus some Tibetan-style buildings and precious historical sites. On New Year’s day of 2016, Dukezong was officially reopened to the public.

How to Get to Dukezong Ancient Town? 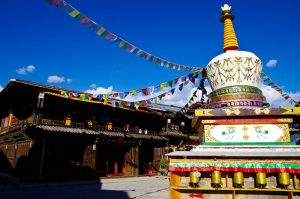 Guishan Park: Built in the reign of emperor Kangxi, the park is built leaning the hill. Chaoyanglou, has three floors and at the top floor of the building people can have a panoramic view of the Dukezong Ancient Town. At the foot of hill, there is an ancient well providing drink water for the townspeople.

Giant Prayer Wheel: The giant prayer wheel in Shangrila is reputed as the largest one in the world for its 21 meters in height and 60 tonnes in weight. Because of its size and weight, the prayer wheel is to be spun by multiple people. It’s a must-see attraction of Shangrila tour.

Square Street: Square Street, at the heart center of the old town, is the main tour area gathering a maze of cobbled lanes, white stupas, renovated tourist shops, café, bars, etc. Further away from the square street, the narrow winding lanes will give you a quieter shelter and unveil you more authentic local touch with the unrestored structures and real local life. The main town square is a snack and bauble market during daytime and a lively dancing place for Tibetan locals at night.

It is suitable to visit Dukezong Ancient Town all year round but summer is the best time. Take enough clothes to keep warm due to the great time differences between day and night.

Most of the dwellings in the ancient town have been converted into inns, restaurants and shops. Most of the inns are featured with Tibetan characteristics, and the price is slightly more expensive than those in the new town.

Pudacuo National Park is a 1,300-square-kilometre (500-square-mile) national park located in Shangri-La County, Yunnan. It is notable as the first national park in China to meet International Union for Conservation of Nature standards. As such they are part of the Three Parallel Rivers of Yunnan Protected Areas World Heritage Site.

With a total area of 31.25 square kilometers and an elevation of 3266 meters, Napahai Nature Reserve is located in Shangri-la city, Yunnan province. Established in 1984, it is a wetland ecosystem protection zone to plateau seasonal lakes and marsh meadows. It is also the wintering habitat of migratory birds such as black-necked crane, yellow duck, bar-headed geese, etc.

►The ancient city of Dukezong was destroyed by fire on January 11, 2014. What visitors see may not match the description.

►The entrance of the Diqing Red Army Long March Museum is the central town hall built in the Qing dynasty, with the architectural style of Han, Tibetan and Naxi, which is of great appreciation value.