The region maintains a strong agricultural focus. Agriculture is restricted to the few upland plains, open valleys, and terraced hillsides. Level land for agriculture is extremely scarce and only about 5 percent of the province is under cultivation. Rice is the main crop; corn, barley, wheat, rapeseed, sweet potatoes, soybeans (as a food crop), tea, sugarcane, tobacco, and cotton are also grown. On the steep slopes in the west livestock is raised and timber, a valuable resource, is cut (teak in the southwest).

Yunnan produces most of coffee grown in China (although there are also much smaller plantations in Fujian and Hainan. Large-scale coffee cultivation started in Yunnan in 1988. The most commonly grown variety in the province is catimor.

Tobacco is the main (export) product and makes up a big part of the provincial GDP.[70] Furthermore, Yunnan has a strong competitive potential in the fruit and vegetable industries, especially in low value-added commodities such as fresh and dried vegetables and fresh apples.

Due to China’s growing consumption of dairy products, Yunnan’s dairy industry is also developing very rapidly and is also aiming to export to its ASEAN neighbors.

The flower industry in Yunnan province started to develop towards the end of the 1980s. Yunnan province accounts for 50% of China’s total cut flower production. The size of the planting area for cut flowers in Yunnan province amounts to 4000 hectares. In 2003, the output totaled 2.3 billion stems. In 2002 the flower industry in Yunnan had a total output of RMB 3.4 billion. Export amounted to US$18 million. Apart from sales on the domestic market, Yunnan also exports to a number of foreign countries and regions such as Japan, Korea, Hong Kong, Thailand and Singapore. 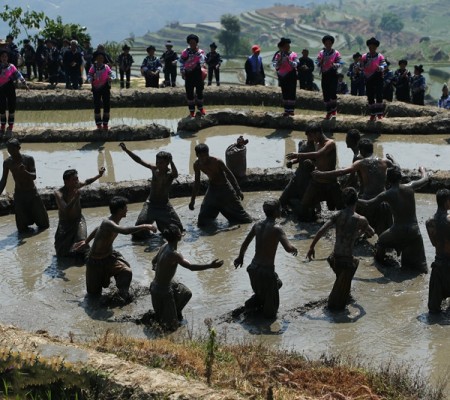