The first railway in Yunnan, the Kunming–Hanoi Railway (Sino-Vietnamese Railway), dates back to 1910. In 1941, American-supported construction began on the English Yunnan–Burma Railway, but this was aborted due to Japanese advances. The building of railways in Yunnan is difficult due to rugged terrain locally and in neighboring provinces. The rugged terrains requires rail lines to have extensive bridges and tunnels which adds to construction cost. Yunnan is one of the poorest provinces in China and the construction of railways is capital intensive. After the founding of the People’s Republic of China in 1949, Yunnan Province has experienced two periods of railway construction—from the late 1950s to the mid-1970s and from the mid-1990s to the present, which have connected the province with the national rail network and expanded the provincial rail network.

At present, railways in operation in Yunnan include:

The Dali-Lijiang Railway opened in 2009, is one of the newest railways in Yunnan. Pictured, a viaduct on the Da-Li line near Lijiang.

The current network is centered around Kunming and most extensive in eastern Yunnan with outlets to Guizhou and on to the Yangtze River valley and Guangxi and on to the South China coast.

Since the late 1990s, the railway network in Yunnan has undergone considerable track upgrade and electrification to boost carrying capacity. Expansion projects include:

Kunming South railway station is the main high-speed rail station of the Kunming metropolitan area. The station, put into operation in December 2016 after five years of construction, is the western terminus... 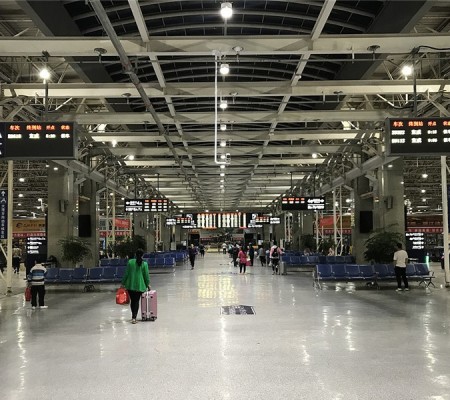