Yunnan province is also expanding the provincial rail network to neighboring Southeast Asian countries. In the east, the Yuxi–Mengzi Railway (141 km (88 m)), under construction since 2005, and the Mengzi–Hekou Railway (140 km (87 m)), was under construction since 2008, and completed in 2014 forming a standard gauge railway connection with Vietnam. In the west, the Dali–Ruili Railway (336.387 km (209 m)), under construction since May 2011, is expected to extend rail service to the border with Myanmar. In the center, under planning is a rail line from Yuxi to Mohan, in Xishuangbanna Dai Autonomous Prefecture, on the border with Laos. This line could be extended further south to Thailand, Malaysia and Singapore.

Neighbouring Countries to Yunnan by Train

The Trans-Asian Railway (TAR) is a project to create an integrated freight railway network across Europe and Asia. It is a project of the United Nations Economic and Social Commission for Asia and the Pacific (UNESCAP). The Southern Corridor will go from Europe to Southeast Asia, connecting Turkey, Iran, Pakistan, India, Bangladesh, Myanmar, and Thailand, with links to China’s Yunnan Province and, via Malaysia, to Singapore. A Southeast Asian network; this primarily consists of the Kunming–Singapore Railway.

The China-Vietnam railway, running from Kunming to Hekou via Yuxi and Mengzi, has opened to public in December 2014. As the Yunnan section of East Corridor of Trans-Asian Railway, it is also the first international railway connecting southeast Asia and Yunnan. Everyday, there will be about 4 trains departing from Kunming Railway Station to Hekou North Railway Station, and the schedule is listed as follows:

At present, the railway from Yuxi to Mohan is under construction and it is expected to be open to traffic by 2021. The main stops from north to south are Yuxi, Yanhe, Eshan, Luoli, Yuanjiang , Mojiang, Ninger, Puer, Mengyang, Xishuangbanna, Ganlanba, Mengla, Mohan. By then, tourists can take the train to Mohan Border.

Yunnan-Myanmar Railway Project, 1,193 miles (1,920 km) long, will link Kunming, capital city of China’s Yunnan Province with Yangon, Myanmar’s largest city. The top permitted speed will be 87 mph (140km/h). Up till now, the section in China has been under construction since December, 2015 and it is expected to be completed by 2020. While the section in Myanmar is still under negotiation. Kunming to Yangon train will start from Kunming, run southwestward to Ruili at Chinese – Burma border, and then southward through Burma to Yangon.

The Railway hasn’t been opened yet. The construction began in December, 2017 and the duration is about 4 years. It will run through three countries including China, Laos and Thailand, serving trains running between Kunming and Bangkok. In the far future, this China – Thailand railway project will be extended all the way to Singapore, shaping a high speed railway as long as 1,864 miles (3,000 km), namely Kunming – Singapore Railway.

The Kunming–Singapore railway, increasingly called the Pan-Asia railway Network is a network of railways, being planned or under construction, that would connect China, Singapore and all the countries of mainland Southeast Asia. When completed, a trip from Kunming to Singapore would take 10 hours by rail. However, in 8 May, 2018, the government of Malaysia has announced it will cancel the high-speed rail project between Singapore and Kuala Lumpur.

List of stations There are 32 stations along Boten–Vientiane railway line, though only 20 stations are actually under construction, including 10 passenger stations and 10 cargo stations: Station Name Destination...

The Boten–Vientiane railway (often referred to as the China–Laos railway) is a 414 kilometres (257 mi) 1,435 mm (4 ft 8+1⁄2 in) standard gauge electrified railway under construction in Laos, between the capital Vientiane and the small town of Boten on the border with China. It is...

VIENTIANE, Oct. 6 (Xinhua) — Lao Prime Minister Phankham Viphavanh said on Wednesday that the China-Laos Railway will open on Dec. 2 this year as scheduled. Dec. 2 this...

VIENTIANE, Nov. 1 (Xinhua) — The Lao government has ordered full-scale preparations for the opening of the China-Laos railway, as Laos and China count down to Dec. 2, the... 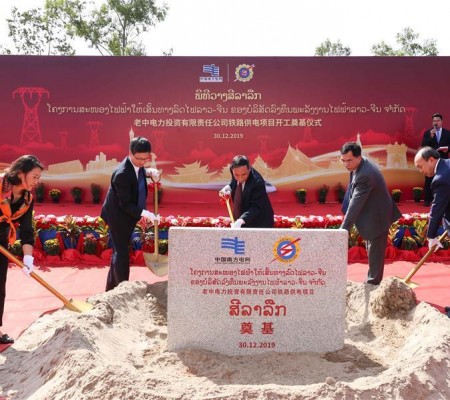 China – Thailand Railway, or Sino – Thai Railway hasn’t been opened yet. The construction began in December, 2017. About 4 years are needed to complete this high speed rail...