Dehong Overview will give you a comprehensive understanding of  Dehong Dai and Jingpo Autonomous Prefecture including the basic information, geographical location, climate, transportation and so on.

Dehong Dai and Jingpo Autonomous Prefecture is known as the Peacock Town which is located in the west of Yunnan. Dehong is a transliteration from Dai language, meaning ‘the downstream of the Nujiang River’. Dehong Prefecture boasts distinctive geological advantages. It shares a 503.8 km border with Burma. Four of the five Dehong’s counties lie on the border.Historically, Dehong Prefecture was a major outpost of the ancient Silk Road. Nowadays, Dehong Prefecture is the juncture for the Chinese Economic Area, Southeast Economic Area and South Asia Economic Area. Dehong is the fascinating place where the Dai and Jingpo people as well as other ethnic groups live harmoniously. It offers the charming natural scenery and the superior climatic conditions. Local people forget the hustle and bustle of the city, enjoy the nature and appreciate the minority customs.

Dehong was called “Ancient Mengmao Kingdom” in the recording of The Pattra Sutra; it was named as the “Dianyue Elephant Riding Kingdom” under the pen of Simaqian; it was the Jinchi Kingdom in the book of “Marcopolo and His Travels”. Dehong is not only the outlet of the ancient “The Southwest Silk Road of China”, but also the outlet of the Yunnan-Myanmar Road. At present，it is still the golden port leading to South Asia and Southeast Asia. Since its founding in 1953, the Dehong Dai and Jingpo Autonomous Prefecture has been a great concern of the leaders of the CPC Central Committee and the State Council. The older generation of the Party and state leaders such as Mao Zedong, Liu Shaoqi, Zhou Enlai concerns the troops stationed in border areas, cadres and the people of all nationalities. Whatever, different ethnic groups live in the pure land in harmony.

More about History of Dehong Dai and Jingpo Autonomous Prefecture

Dehong is located in the southern part of the Hengduan Mountains in the west of Yunnan Guizhou Plateau. The western mountains of Gaoligong Mountains extend into Dehong.The highest point in the whole prefecture is 3404.6 meters in the Dangniang mountain in the north of the Yingjiang River, and the lowest point in the Jieyang Valley in the west of Yingjiang, only 210 meters above sea level. The state is generally 800 - 2100 meters above sea level.

Situated in the west boundary area of Yunnan Province, Dehong Dai and Jingpo Autonomous Prefecture neighbors Baoshan City to the east and northeast, and shares a boundary of 504 kilometers (313 miles) with Burma in the south, west and northwest. “Dehong” in Dai language means the lower reaches of Nujiang River, and its total area is 11526 m2. The national-level scenic zone of Ruilijiang River and Dayingjiang River sweeps into almost the whole prefectural land area; in its subordinated three counties and two cities, there are two excellent tourism cities, Ruili City and Yingjiang County.

Dehong Prefecture is close to the Tropic of Cancer, located at a low latitude and affected by the southwest monsoon of the Indian Ocean, which belongs to the south subtropical monsoon climate. In summer, warm and humid air from the Indian Ocean rises along the windward slope of the southwest sloping mountain, forming abundant natural precipitation. In addition, the low latitude plateau region has a large incidence angle of the sun and good air transparency, making it one of the high-quality illumination areas in the country.

The Best Time to Visit Dehong

The best time to visit Dehong is from September to May next year. September to May next year is the best time to travel to Dehong. You can not only avoid the hot and humid rainy season in Dehong, but also stay away from the cold and long winter in the north. You can enjoy the colorful customs of southwest ethnic minorities in the subtropical beautiful scenery in spring-like seasons.

Dehong Adminstrative Division gives you information about places to visit when you travel to Dehong. Dehong Dai and Jingpo Autonomous Prefecture covers 2 cities and 3 counties. Its government seat is located in Mangshi City.

Local culture emphasizes on the minority culture and Hinayana Buddhist culture in Dehong, which make Dehong colorful and interesting. The literature and art in Dehong are fantastic, covering the drama, music, dancing and handicrafts. All of these show the booming culture of Dehong. There is one point which should be remarked in Dehong. That is the strong belief in Hinayana Buddhism represented in the forest of pagodas and temples. Local culture of Dehong is the integration of diverse ethnic culture.

The transportation of Dehong is convenient in general. There are long-distance buses and airlines (Mangshi Airport) from Kunming to Dehong. The railway station is being built. It is also convenient to get around in Dehong. Dehong Prefecture boasts distinctive geological advantages. It shares a 503.8 km border with Burma. Four of the five Dehong's counties lie on the border. There are 28 ferries, 64 passages and 9 highways that lead to Burma. Historically, Dehong Prefecture was a major outpost of the ancient Silk Road. Nowadays, Dehong Prefecture is the juncture for the Chinese Economic Area, Southeast Economic Area and South Asia Economic Area.

Things to Do in Dehong

Dehong travel features in tropical rain forest scenery, ethnic culture, border culture and Jade Culture Tour.  If you want to have an overall glimpse into all facades of Dehong, at least 3 days are suggested for Dehong travel.

The natural beauty of the region is prominently rendered by the Ruili and Da’ying Rivers which have allowed the thriving flora and fauna, natural scenes and ethnic cultures to thrive. Birding tour to  Yingjiang Hornbill Valley  and hiking to Moli Tropical Rainforest and Moli Waterfall or Drifting on Ruili River will feast your eyes with the pleasant  tropical rain forest scenery.

However the  tropical rain forest scenery is not the only attraction of this beautiful area. The Dai people in Dehong believe in Theravada Buddhism and there are stupas spread across the prefecture. Two of them are clearly unique. They are called Tree-Wrapped Pagoda and Pagoda-Wrapped Tree. As the name suggests, the former has a banyan tree wrapped around it and the latter has been built around a tree. It is believed that this has been a natural occurrence and not induced by disciples.  If you want to know about the Theravada Buddhism and the architecture art of Dai temples and pagodas, you shouldn’t miss the temples in Dehong, particularly the famous ones such as Yunyan Stupa , Jiele Great Golden Pagoda, Menghuan Golden Pagoda.

If you visit Dehong in February, you will be able to attend the Munao Zongge Dance Festival which is the grandest celebration of the Jingpo ethnic minority that lasts for three days and falls on the 15th day of the first lunar calendar. Dancing is the main highlight of the festival, you can watch Jingpo people dancing in their folk costumes, with silver ornaments shining and jangling. At the end of the dancing show, all participant are invited in join in the dance, you should have a try.

Ruili, take its location advantage for adjacent Burma, is one of the most important trade center of emeralds in China. Large quantity of top-qualitied emeralds has enticed many tourists or buyer from Beijing, Shanghai or Hongkong. Ruili also gained the praise as “Emeralds of Yunnan, Emeralds from Ruili”. Mangshi has some jade wholesale market. Because it’s closed to Burma where it has rich jade and stone resource, with good quality and reasonable price. Ruili Tourist Jewelry Street, Jiegao Jade Town in Ruili City, Mangshi Jewelry Town have the fine collection of jade and jewelry products for you choice. You may also experience finding gemstones in the Taobaochang in Nangu River, or try a small gamble on stone in Dehong Jewelry Night Market 德龙珠宝夜市.

The average annual water output of rivers in Dehong Prefecture is 13.63 billion cubic meters, and the transit water volume is 8.17 billion cubic meters. The total amount of water resources is 21.8 billion cubic meters, most of the surface water is not polluted, and the physical properties are good, meeting the requirements of industrial and agricultural production and domestic water. Dehong's utilization rate of water resources accounts for only 2.3% of its total. The theoretical reserve of water energy  is 3.624 million kilowatts, of which 1.0215 million kilowatts can be developed and utilized.

People and Population in Dehong

Mangshi City History Dehong was called “Ancient Mengmao Kingdom” in the recording of The Pattra Sutra; it was named as the “Dianyue Elephant Riding Kingdom” (滇越乘象国)under the pen of...

Mangshi City Culture Mangshi is a classic national minority border city, so it has very thick and authentic national customs, plus its pretty landscape, it has nicknames, such as... 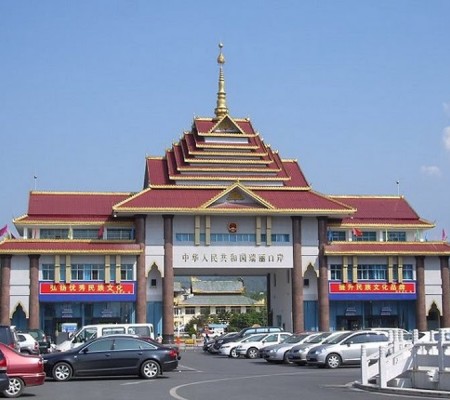 Ruili City History Ruili is the cradle of the ancient culture of Dai nationality. Ruili River Valley is one of the places inhabited by ancient human beings. The cultural... 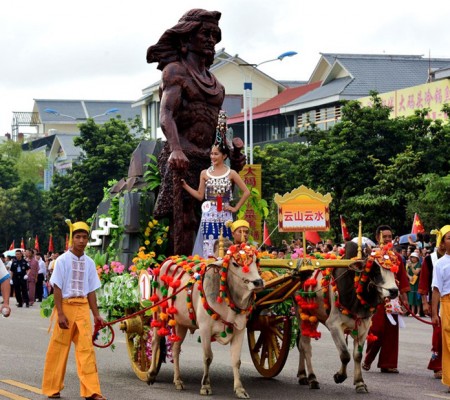 Ruili City Culture Ruili is a unique frontier city which stand on the west land of Yunnan province. It is the integration of minority and exotic culture. Ruili residences...

Longchuan is under the ministration of Buwei county of Yizhou Prefecture, Han Dynasty. In Tang Dynasty, Longchuan is governed by Yongchang. Until year, 1950, Longchuan is free as a...