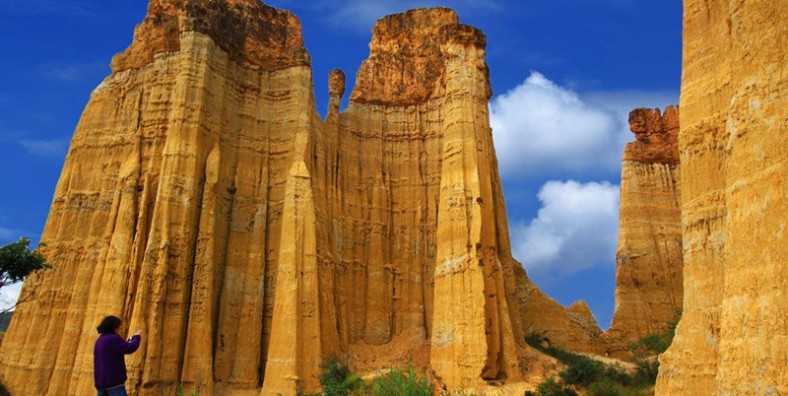 Langbapu Earth Forest, also known as Xinhua Earth Forest, is located in Xinhua Township, 33 kilometers west of Yuanmou County. It is a special geologic landform formed by runoff erosion, and it is a special lithological association. It was formed under the influence of tectonic movement, climate, frequent neotectonic movement, rapid crustal uplift rate and strong runoff erosion. The colorful earth forest looks like grand palaces from a distance.

Why is Langbapu Earth Forest So Special

It is a special geologic landform formed by runoff erosion, and it is a special lithological association. It was formed under the influence of tectonic movement, climate, frequent neotectonic movement, rapid crustal uplift rate and strong runoff erosion. The colorful earth forest looks like grand palaces from a distance. And if you walk into the earth forest, you will find yourself in an old castle or a gallery. The earth columns have varied shapes: a palace, a tower, a sword, a flying eagle or a galloping horse. It’s a wonderfulness of the nature!

Where is Langbapu Earth Forest

The Earth Forest is tall and dens with complete types. The conical earth pillars are especially well developed. They are generally 8-25 meters high, up to 42.8 meters. The shape has various shapes such as a cone shape, a peak cluster shape, a snow peak shape, and a city shape. The sown-peak shape is large in size, up to 40 meters. A few tiny rice fields with irregular edges, like a mirror on one side, reflect the blue sky and white clouds and the spectacular scenery of the earth forest. Entering the Langbapu Earth Forest is like the fantasy world described in “One Thousand and One Nights” and the dream world in “Journey to the West”, which makes people fall in love on the edge of dreams and reality. 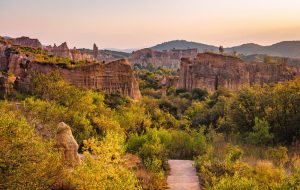 it is the best time to visit Wumao Earth Forest from November to March of the following year. Because it is the dry season, the road condition is better and the climate is warm.

Wumao Earth Forest
Wumao Earth Forest, also known as Laohutan Earth Forest. It is about 36km from the downtown of Yuanmou County. The unique landscape was formed by geological movement and soil erosion one or two million years ago. It is named for its shape like immense forest and the main composition of the expansion is earth. There are four main styles columns : earth pillar style, castle style, bamboo shoot style and mushroom style. 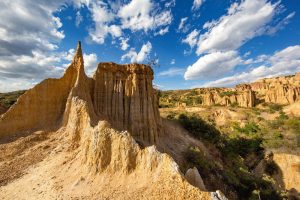