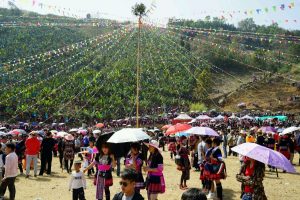 In 2014, the miao nationality Huashan Festival(花山节), a folk custom, was approved by the State Council to be included in the fourth batch of national intangible cultural heritage list. Huashan Festival of Miao Ethnic Minority is held around May 1. It is an annual “Cai Huashan” festival(踩花山) held by the miao people in southwest China. At this time, the Miao people from all villages rushed into the open slopes. “Flower sticks” （花杆）is an important symbol of the Huashan festival, generally choose tall and straight pine or cypress, tied with flowers, colorful flags. It must be set up well before sunrise on the first morning of the festival.

Huashan festival, also known as the Cai Huashan(踩花山). This is a grand show of the miao people in southern Sichuan(四川). It is generally held in relatively gentle areas, a bamboo pole or tree pole with a height of five or six feet was erected. This was the flower sticks（花杆）, on which two pieces of red and black cloth were hung. Every year, the Huashan host set up the flower pole, let people know there is a flower field, to the first day of the first month began to Cai Huashan(踩花山)., the more solemn huashan festival can be extended to the eighth and ninth day. There are two different stories about the origin of the festival,, one is to praying for children and the other is the anniversary. 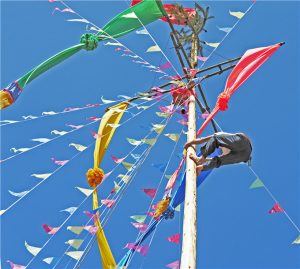 On the day of Cai Huashan(踩花山), yingduo(miao language, young man) were all dressed in miao costumes, carrying lusheng（芦笙） on their shoulders. Yingcai (miao language, little girl) people all wear their own hand-embroidered flower clothes and hand-point waxwork pleated skirt（蜡花百褶裙）, singing folk songs from every corner of the miao mountain gathered to the Huashan.(花山) Between the young men and women, through the song, if the two sides will give gifts to each other as a souvenir, until the end of the Huashan Festival, Yingcai(莺彩) follow Yingduo(莺哆)go.

On the day of Huashan Festival（花山节）, the person who first participated in the festival by the “flower head”(花杆头) toasted and blessed, and then announced the beginning of the festival. At this time, various celebrations began. Some young men and women sang folk songs, some danced three-step dances（三步舞）, lame dances（蹬脚舞）, some played “reed racks” (芦笙架), some lion dances（狮子舞）, and bullfights, and the entire Huashan（花山） field was full of joy. The annual Huashan Festival(花山节) is also a good time for Miao young men and women to pour out love and set up friends. once they fall in love, the man must be wrapped in flowers, and the girl is given a flower belt, and the woman is also gifted by her own handkerchief（花帕） and Baotou（包头） embroidered by her own hands.

The most important activity of the Huashan Festival (花山节) is the inverted climbing rod.（倒爬花杆） The climber must have a back stick, and the hands are pulled upwards. The head is facing up and down, and jumps vertically. Whoever climbs to the top of the pole spends the least time，who is the winner. The Huashan Festival is also a good time for Miao young men and women to pour out love and get married. The Huashan festival is also a good time for young men and women of miao people to pour out their love and betrothal to each other. In the period of the republic of China, the history of customs of maguan county《马关县志·风俗志》recorded the story of commitment between men and women in the huashan festival.