Lufeng World Dinosaur Museum is located in South Jinshan Road, Lufeng County, Chuxiong Prefecture(楚雄州禄丰县城金山南路). There are 8 exhibition halls in the museum, which display the world’s oldest dinosaur fossils, anthropoid fossils, porcelains of the Ming Dynasty, and bronze Buddha statues of the Qing Dynasty. Among them, the Xu's Lufeng dinosaur(许氏禄丰龙) and the giant Lufeng dinosaur(巨型禄丰龙) fossils are the oldest and most preserved specimens of dinosaur skeletons.

Why is Lufeng World Dinosaur Museum So Special

Lufeng is the site of numerous Jurassic dinosaur discoveries, first found there in 1938. Most well known is Lufengosaurus, a Jurassic prosauropod. More recently, teeth and a skull of Ramapithecus, a Miocene period primate related to the orangutan, have been found in Lufeng.

Where is Lufeng World Dinorsaur Museum

After arriving in Lufeng County, it is very convenient to get to Lufeng World Dinosaur Museum, which only need few minutes to get there. If there are not two many luggages, walking is the best choice to get there.

Lufeng is nicknamed the Home Town to Dinosaurs. Back in 1938, Bian Meinian(卞美年), one of China’s famous geologists, and Yang Zhongjian(杨钟健), one of China’s renowned paleontologists, discovered whole clusters of rare dinosaur fossils as well as other fossils of extinct plants and animals from ancient times. They are named “Lufeng reptiles and dinosaur clusters”. In the same year, the complete skeleton of a dinosaur was unearthed. Ever since then, the Lufeng dinosaur became famous. There are dozens of other dinosaur fossils which were excavated in the following years. It is found that the distribution of dinosaur fossils extended for 10 sq.km (6. 2 sq.miles), with Lufeng being at the center. It is believed that dinosaurs found here are the best vertebrate fossils that are the most primitive, the oldest, with the most varieties and in their most complete form. China’s first assembled dinosaur for study purposes was unearthed in Lufeng, and it has been dated to have more than 180 million years.

There are some kinds of unearthed dinosaur fossils, which are displayed in the Lufeng World Dinosaur Museum. At the end of 2008, the newly constructed Jurassic Park was finished, adding a more scientific and trendy atmosphere to the ancient dusty place.

At the north side of Lufeng County, about 9 km (5.6 miles), away is the site where the fossil, one of China’s most ancient homo sapiens, was discovered. In May 1975, archaeologists found a tooth fossil in a pile of coal deposits.  After that, more than 700 pieces of bone fossils were excavated. They were named Lama Ancient Homo Sapiens by archaeologists and anthropologists, believing that they lived about eight million years ago. In January 1988 the site of the coal deposit, where the first tooth fossil was found, was designated as a national key protection area, and the surrounding area of 20 acres (1.4 hectares) was walled. Within the protected area, an ancient ape statue monument was erected to mark this important archaeological discovery.

It is appropriate to visit Lufeng World Dinosaur at any time. 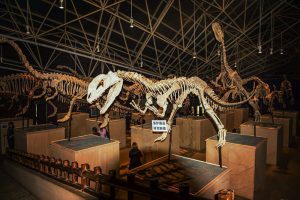 Feilaisi Temple
Feilaisi Temple is located at the hillside. Because of the steep mountain, looking from the bottom of the mountain, the whole temple is like a big bird entwined in the mountain. It seems to be flying and it also seems to have just landed from the sky. Therefore, Feilaisi Temple got its name. Looking down from the temple, the Longchuanjiang River(龙川江) passes through the deep canyon, and the town’s buildings are dotted on both sides of the river.

Heijing Ancient Town
With traditional folk residences, archways, and religion architectures, Heijing Ancient Town is well conserved in a traditional style as others do in China. Among them, 27 have been listed as county-level cultural relics protection units, and are known as “the treasure house of historical relics – the living fossil of Ming and Qing Dynasties”.