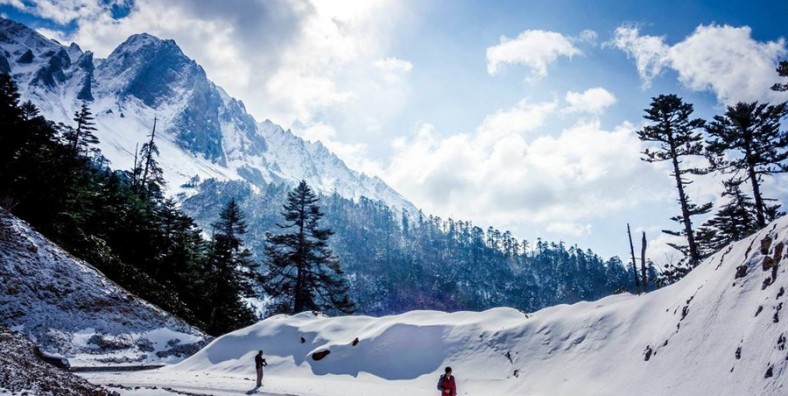 Why is Biluo Snow Mountain So Special?

Biluo Snow mountain is one of the major mountain ranges in Hengduan Mountain in Yunnan. There are 15 snow mountains, which stand 4000 meter above sea level. The Laowo Mountain is the most beautiful a highest mountain than the others, which is 4500 meters above sea level. It is 3200 meters higher compared with the Lantsang. The original ecosystem has been preserved. The climate changes unconventionally in the mountain. It is also called the “Mountain of thousands of Waterfalls and Lakes”, indicating the rich in the beautiful landscapes.

Where is Biluo Snow Mountain – Location

Located in Lanping County and being one of the major mountain ranges in Hengduan Mountain in Yunnan, it faces Lan Cang River ­on the east, and stops at Nujiang River the west. Both sides of the Biluo Snow Mountain are vallies 3,000 meters above sea level. Originated from Tanggula Mountain in Tibet, the mountain strentches southward to Yunnan. It is the boundary mountain between Lanping county and Fugong county, Bijiang county and Lushui county.

There are more than 30 pools of various size(called Longtan by locals) on the mountain. The largest one of these is Nianbuyiben Pool, which is more than 300 square meters. There are animals like tigers, leopards, bears, mountain donkeys, red deer, deer, monkey, wolf, also birds like snow pheasant, silver pheasant, parrots, as well as rare herbs such as snow lotus, snow angelica, dangshen, eucommia and so on. When the mountain is covered with snow in winter and spring, it is like a long silver dragon coiled on the plateau. It is in contrast with the mountains of Gaoligongshan, which is also covered with silver.

How to Get to Biluo Snow Mountain 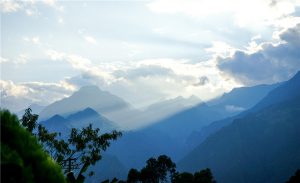 One can take the shuttle bus from Nujiang Lisu Autonomous Prefecture to go to Lanping Bai & Pumi Autonomous County, then transfer a local mini-bus to go there. For tourists, renting a car to Biluo Snow Mountain is the best way.

At the end of the spring and beginnings of summer, as the cloud and mist rise in the mountain, tourists can stand on the top of the mountain to see the sunrise and the sunset, which is very spectacular. The Yulong Snow Mountain, Haba Snow Mountain, Jinsichang Snow, Laojun Mountain, Xuebang Mountain in east. Steep and vertical, the accumulated snow remains unchanged at the top of the mountains all over the years even in the hottest summer. When winter comes, the silver-clad mountain is like a silver dragon intwine on the plateau, shining together with its neighbour Gaoli gongshan Mountain.

Laowo Peak: All the best sights are in Laowo Mountain, which is the highest mountain in there. You cannot miss the experience when you are here. It has an elevation of 4,500 meters and a relative height difference of 3200 meters with the Lancang river.

Dimaluo Village: Dimaluo village is a natural village in Bangdang township of Gongshan county. It is located in the middle of Dimaluo valley. The village extends along the valley. 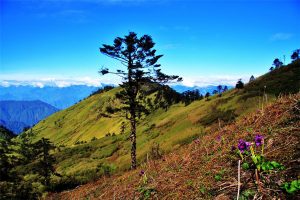 Baihanluo Village: There is a famous Catholic church in the village, which has a history of more than 100 years.”Baihanluo” wine and all kinds of “Baihanluo” wild fruit wine made by French winemaking technology are the best wines of Gongshan area.

Benggu Meadow: With an altitude of more than 3000m, tourists can see the Dimaluo gorge below and firs against the blue sky and white clouds. Climbing up in different directions, you can see different sceneries.

Tourists who want to tour Biluo Snow Mountain can stay at Liuku or Fugong county for overnight. At Dimaluo village or Bingzhongluo, you can stay at the local farmer’s house.

Cizhong Church
Cizhong Catholic Church is a model which combines the architecture features of both western countries and China’s Tibet, Han and Bai ethnic groups. The church and its wing-room, gate, cellar and grape yard were well preserved by local government. It was listed as the key national cultural protection relics by the State Council in 2006.

Meili Snow Mountain
It is one of the most sacred mountains of Tibetan Buddhism. It boasts numerous snow-clad ridges and peaks, thirteen of which are more than 6,000 meters above the sea level. Kawagebo Peak, the highest in Yunnan Province, has the most splendid view rising about 6,740 meters. 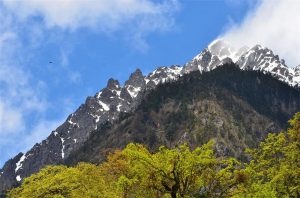 ► Rent a down jacket to keep warm for a wide temperature differential on the snow mountain area.
► Do not run on the mountain, prepare an oxygen cylinder just in case.
► If you feel sick, please take the cableway to go down mountain immediately.
►Don’t leave rubbish randomly.