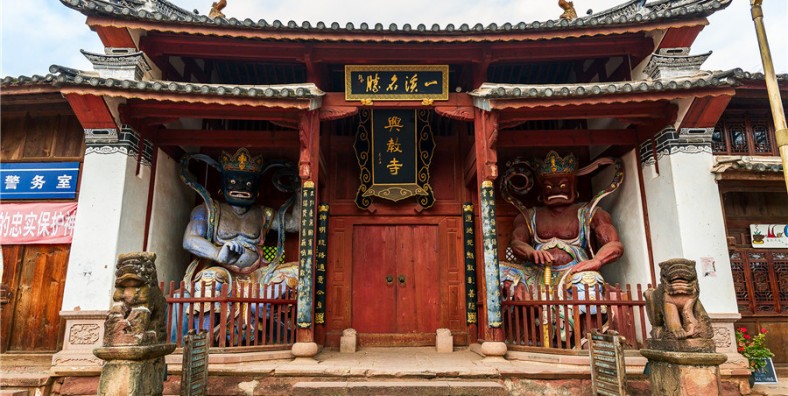 Xingjiao Temple was built in Ming Dynasty with a history of 600 years, which is the most typical and representative Buddhist Azhali Temple in largest scale. The fresco preserved in the temple is an artistic treasure of ancient Bai people in southwest China. It not only absorbed the painting style in central plains of China but also has strong local ethnic features. Walking inside the Xinjiao Temple, travelers must take their breath away in astonishment for the amazing architectural art in Ming Dynasty. Xingjiao Temple is 18 meters from north to south, 14.5 meters from west to east and 19 meters in height. Experiencing several earthquakes during 600 years, it still stands majestically without deformation.

How to get to Xingjiao Temple?

We can take a shuttle bus from Jianchuan County to Shaxi Old Town, then change a local mini-bus to Xingjiao Temple

Unique in the fact that iconography from each the major Asian faiths are all featured here, this is also one of the best preserved temples in the whole country. The courtyard buildings were commandeered and used as a local government headquarters during the twentieth century’s Cultural Revolution. Ironically, this saved it from the widespread destruction that befell many other traditional places of worship. The painstaking restoration process of the SRP (Shaxi Rehabilitation Project) has ensured that this site became a must see site on the Tea Horse Tourist Trail. Valuable Chinese medicine trees such as Delavay’s Magnolia and the Chinese Privet thrive in shaded courtyards. Cleansed of the soot that actually protected them during more turbulent times, original murals can still be seen on the walls of the Hall of the Heavenly King, and the intricately interlocking beams of the interior ceilings are breath taking in their complexity. At the rear, in the temple building itself, five of the most beautiful golden Buddhas sit serenely beneath ornately carved auras. These are some of the most aesthetically pleasing deities that you will see in any Chinese temple today.

Directly opposite the temple is an equally impressive open air theater stage, with an exquisite dragon and phoenix ceiling mural. On the very top floor is a shrine to the ‘Kuixing’ deity, similar but slightly less impressive than the portrayal in the Duan Village Temple Theater. The building is also home to a tiny Exhibition of Tea and Horese Caravan Road, which is really still a work in progress, but already has some impressive examples of local woodcarving skills. 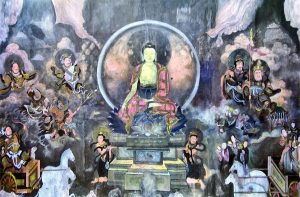 There are 20 more fresco paintings on the hall of the Xingjiao Temple, painted by Bai ethnic painter Zhangbao. Among them, one fresco painting named “Taiziyouyuantu” depicted the life of Nanzhao Kingdom and Dali Kingdom vividly. It is an important evidence to to research Nanzhao Kingdom and Dali Kingdom.
Another painting”Nanwuxiangmo Tathagata” (南无降魔释迦如来会) feminized Sakyamuni, some experts said “it is a rare fresco painting, Sakyamuni in this painting is a girl, maybe in the whole Buddhism, we can only find this one in Shaxi.” It echoes the stone engraving “Ayangbai” which is a symbol of maternal worship.

This temple is waiting for you directly in the center of Shaxi Old Town. It is the only Buddhist temple of Bai People built in the Ming Dynasty. At the present it functions as a museum. An exhibition explains how the SRP (Shaxi Rehabilitation Project) have contributed to the renewal of Shaxi.

Shaxi Ancient Town is a pleasant surprise between Dali and Lijiang. Shaxi Ancient Town is a famous attraction once played an important role as a bustling trade point on the Tea Horse Caravan Road. With the decline of the ancient Tea Horse Road, the town seems to have been forgotten. But this helps retain the original appearance of the small town. Many of the historical sites have been well preserved including Sifang Street, Xingjiao Temple, Yuxi Bridge and Ancient Opera Stage. Compared with other commercialized ancient towns in China, the undeveloped Shaxi Ancient Town is a better place to escape from the hustle and bustle of the metropolis and experience the quaint lives of local Bai People.

· No smoking in the temple.
· Respect the local customs, do not take photos in the temple.
· For your personal security, do not walk to the area which is not open to the visitors.
· If you have any problem please ask help for related staff.