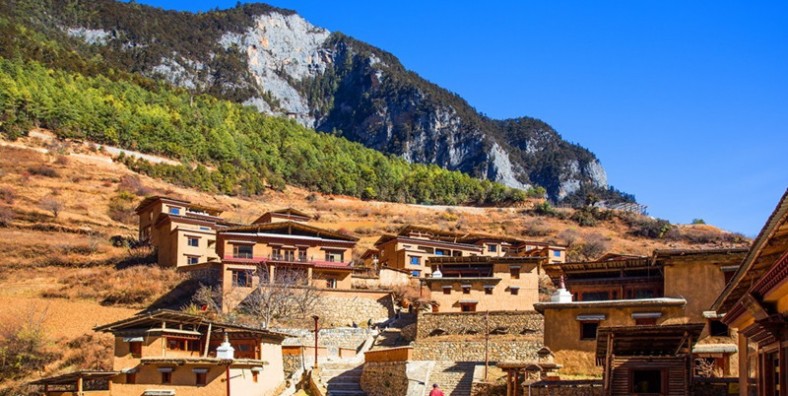 The Bala village is a mountainous village sitting high in the clouds at the heart of the national park - the Balagezong Shangri-la Grand Canyon National Park, previously isolated from the outside world.

Where is Bala Village – Location

The Bala village is a mountainous village sitting high in the clouds at the heart of the national park – the Balagezong Shangri-la Grand Canyon National Park, previously isolated from the outside world.

Shangri-La Grand Canyon Balagezong, a national scenic area, lies at the junction of Yunnan, Sichuan and Tibet provinces, also, at the core area centrally of Hongshan in “Three Parallel Rivers” World Natural Heritage Area, located in northwestern Shangri-La city Nissi country. It is about 50 km(45 minutes) from Shangri-La city center (after the 214 State line Road, two road expansion), 55 kilometers away from the Shangri-la airport, 700 kilometers from the provincial capital of Kunming.

In Tibetan language, “Bala” means people who migrate from Batang(巴塘). Moved here from Tang dynasty, Bala village has a history of more than 1300 years. And Tibetan scripture recorded that thousand thousands years ago, people have traveled thousands of miles from distant countries in search of an ideal home away from war and suffering. After innumerable hardships they finally settled down in the Bala Village. Since then, Balagezong, a symbol of the ideal home and heaven, has been passed down from one generation to another through the folk song.

It’s said that the Blue Moon Valley described in the book Lost Horizon is within the Balagezong Grand Canyon. It is also said among the local people that this is the place where the immortals live, the real “Shambala”. At the end of the village, colorful sutra streamers around Marnyi stones sway in the wind. In the distance, Balagezong Snow Mountain can be seen dimly through the mist, making the village more attractive. 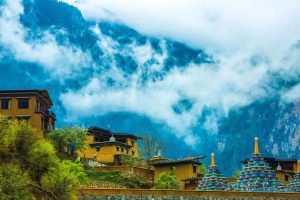 Legend has it that more than 1,300 years ago, there was a brave and powerful Chieftain Sinaduoji(斯那多吉) of King Gesar in the Batang region, who led his people through years of conquest, owning large lands and flocks of cattle and sheep, and became a powerful tribe in the area. However, all these were at the cost of people’s blood and life which brought the extremely painful sadness to their heart.

In a long talk with an old Lama, he mentioned that the Buddhist sutras of Tibetan Buddhism recorded a place called Shambala kingdom, which was surrounded by a snow mountain like eight-petal lotus and was the ideal pure land that Tibetan Buddhists yearned for. So the Chieftain finally decided to give up everything and seek for the pure land at the age of 42.

He led his people through the arduous journey across the Kangba grassland, and finally found the village of Bala at the foot of the snow mountain of Balagezong. They grazed in the white clouds, plowed under the sun and rainbow, recited the scriptures and sang in the flowing clouds, and worked at sunrise and sunset.

Bala villagers are diligent and plain. For more than 1,300 years, people in Bala village have been living the life of men plowing and women weaving. They are blessed by the sacred mountain, and they are also very pious to the sacred mountain. There is lack of material, but no lack of faith. They have been living a life of semi-farming and semi-herding. Bala village is the spring pasture, and the riverside is the valley pasture in the autumn and winter seasons. Therefore, the nomadic culture here has yearly three-dimensional migrations, and the well-preserved pasture is the important nomadic place of Bala village.

A very unique custom in Bala village is to keep no dogs in every house. They have always been mindful of the rules handed down by their ancestors. They did not need dogs to build the distance and obstacles between people’s hearts, nor did they need dogs to look after each other’s cattle and sheep. No family door is locked, and the simple wooden door is only to prevent the invasion of beasts and random access of livestock. They rely on the belief of Buddhism and their conscience to protect the home of the heart.

Bala Villagers still use the oldest Tibetan dialect spoken more than 1,300 years ago, and is different from the surrounding villages. This language is known as a living fossil of the Kangba Tibetan dialect. 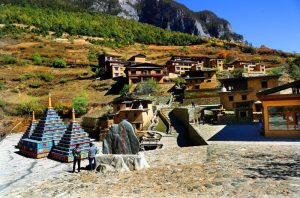 Surrounded by mountains, the Bala Village is a typical Tibetan village. Till now, Bala village is still a secluded land with Tibetan wood houses. Tibetan wooden buildings were built according to mountain terrain, and there are colorful prayer flags surrounded the Marnyi Stone at the end of the village.

The houses in Bala village are a Tibetan architecture unique to Shangri-la, a perfect combination of the plateau slopestyle and the valley pillbox, which is conducive to rain and snow to ease the pressure on the houses, while the pillbox is conducive to collecting highland barley and stewing the mulberry every day. All houses are civil structure, warm in winter and cool in summer, with strong earthquake resistance, and the walls are made of cohesive soil.

In the past, the transportation here is very inconvenient. There has been no highway for a long time, and mules and horses is the only means of transportation. Usually the villagers spent about several months getting out of the village to buy some necessities of life.

Later, a villager of the Bala village named Sinadingzhu(斯那定珠), he raised the money and built a road to the outside world for the villagers of the mountain. This road not only let the villagers get out of the village, but also let the outside people have a chance to see this paradise. 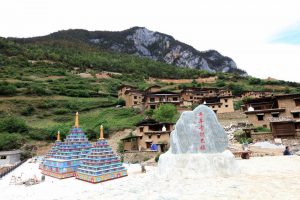 By Scheduled Bus: From Dukezong Ancient Town, the bus leaves for Bala Gezong in the mornings at 9:15 and back to the ancient town again between 16:00 – 18:00. The trip takes about 2 hours.

By car-rental: Depending on the season and type of vehicle, prices vary between 800 and 1200 RMB. It’s recommended to make an appointment of pick up time with the taxi driver and leave the driver telephone number, in order to avoid that you could not hit the car when you going back.

Dukezhong Ancient Town
As one of the largest and best-preserved Tibetan residence groups in China, the 1300-year-old Dukezong Ancient Town, situated at Shangri-la County, Deqing Tibetan Autonomous Prefecture, not only plays an important role in the Old Tea – Horse Road, but also serves as a corridor connecting Chinese and Tibetan language, people, religion and cultures. Until the fire disaster damaged the most of Tibetan dwellings in 2014, it still remains the traditional Tibetan architectural style.

► Bala village is high in altitude and has strong ultraviolet rays, so it’s best to take some warm clothes and sun protection stuff.
► Tourists will take the shuttle bus(the bus fare included in the entrance ticket) from the entrance to the village. Due to lots of mountain road turns, carsickness tourists can take some dramamine.
►The scenic area can provide accommodation, catering, leisure and other services.

One thought on “Bala Village in Shangri-La, Diqing”