The unique scenery, coupled with fascinating Shangri-la ethnic culture makes it attractive and charming. Shangri-la is inhabited by many different ethnic groups, with Tibetans accounting for the majority of the population and possessing a strong Tibetan cultural atmosphere. Each ethnic minority there has its own unique customs, traditions and architectural styles, making Shangri-la a picturesque village. You will have the chance to experience Tibetan life, learn about their lifestyle, religion and cuisine.

In the 1930s, Shangri-la appeared in the famous novel Lost Horizon of the British writer James Hilton and became popular in the world. Soon after, it was made into a film of the same name and won many oscars, making it even more well-known to the world. In October 1996, the search for Shangri-la in Yunnan was launched. In September 1997, the government of Yunnan province held a press conference in Zhongdian county, capital of Diqing prefecture, announcing that the Xanadu Shangri-la people sought was right in Diqing. On December 17, 2001, Zhongdian county was renamed Shangri-la county with the approval of the state council. On December 16, 2014, Shangri-la county was changed to Shangri-la city with the approval of the state council.

The main ethnic minority in Shangri-la is Tibetan, therefore, the religion in Shangri-la is also dominated by Tibetan Buddhism. Entering Shangrila, mounds of mani stones and streamers of prayer flags can be seen everywhere. When temples come into view, they reveals the mysterious charm of Tibetan Buddhist culture. The temple is the materialized form of Tibetan Buddhism in Shangri-la. It relies on the nature and is rooted in the minds of the people. It is also the spirit palace of the god and the human harmony. Among the numerous temples, Songzanlin monastery is the most representative one.

Since most residents in Shangri-la are Tibetan, most of the local food are Tibetan flavor, even where Sichuan and Yunnan dishes are made. Of course, there are also Sichuan and Yunnan restaurants in Shangri-la, which serve authentic dishes, as well as some welcomed Tibetan dishes. The latter includes zanba, buttered tea and barley wine. In addition, tourists can choose to spend the night in the homes of Tibetans, where people can taste Tibetan food and learn about local customs.

The dietary customs of Shangri-la mainly belong to three styles: Sichuan, Yunnan and Tibet. You can also find restaurants in Shangri-la that offer the same three food styles, or a blend of all three food styles. Sichuan and Yunnan food tends to be spicy, while Tibetan dishes, usually made with beef, are less spicy. In addition to the main Tibetan dishes, some Tibetan snacks can be served in the little restaurants in Shangri-la.

In addition to Tibetan, the main minority in Shangri-la, there are also more than 20 ethnic groups including Han, Naxi, Yi, Bai, Dai, Zhuang, Miao, Hui, Lisu, Lahu, Wa, Yao, Jingpo, Blang, etc. And there is only one ethnic town in Shangri-la, that is Sanba Naxi Ethnic Town(三坝纳西族乡).

According to the published list of traditional Chinese villages, Shangri-la currently has seven villages on the list. See below:

Ethnic festivals in Shangri-la include horse racing festival on the fifth day of the fifth lunar month, Gedong festival(religious festivals), Er Yue Ba(The eighth day of the second lunar month) of the Naxi ethnic group and the Torch festival of the Yi ethnic group, etc. Besides, songs and dances in Shangri-la mainly include Guozhuang dance(锅庄舞), Tibetan dance, A Ka Ba La dance(阿卡巴拉舞) of Naxi, Lusheng dance of Yi, Duijiao dance(对脚舞) of Lisu, etc. There are 7 kinds of Tibetan costumes and 3 kinds of Naxi costumes in Shangri-la. Within the territory, the architectural styles of Tibetan dwellings include almost all the styles of Chinese folk houses except Dai building.

Intangible Cultural Heritages and Its Inheritors in Shangri-la

With a large number of ethnic minorities, Shangri-la has many intangible cultural heritages with ethnic characteristics, including Caizha paper art, Tibetan black pottery firing techniques, Naxi traditional textile craft, wooden bowl-making craft and Tibetan painting skill, etc. Every intangible cultural heritage has its inheritors, who play a vital role in the promotion and inheritance of culture.

During the tour, tourists can experience the Tibetan Buddhism culture in the temples and monasteries of Shangri-la, or pay a visit to Tibetan villages to learn more Tibetan culture and taste famous Tibetan food. 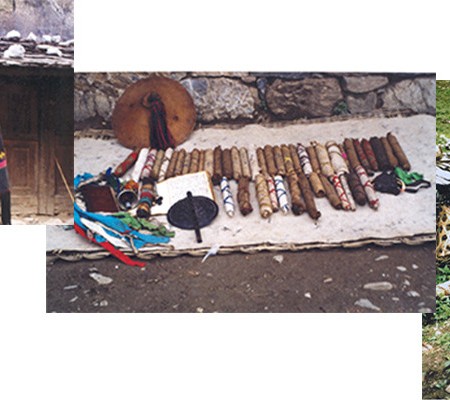