Mention China and the first image in your mind is likely the Great Wall. Or Mao’s portrait at Tiananmen Square. Or maybe the Shaolin Temple.

It’s not likely, though, to be the Tiger Leaping Gorge – or is it? This dramatic limestone canyon carved by Asia’s longest river is quickly becoming one of China’s iconic landscapes.

Part of UNESCO’s heritage site Three Parallel Rivers in China’s southwest Yunnan province, Tiger Leaping Gorge is where the Yangtze river rages through 13,000 feet of sheer cliffs. Flanked by the Jade Dragon and Haba Snow Mountains, this area is one of China’s most beautiful natural treasures. 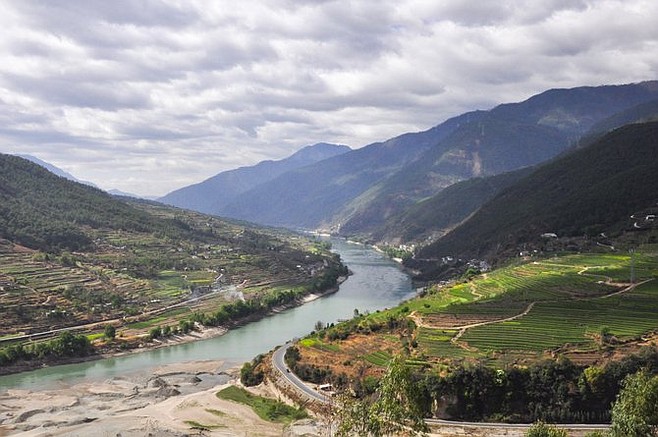 View of the Yangtze River at the start of the hike.

Despite its proximity to Lijiang, a destination for an annual five million domestic Chinese visitors, Tiger Leaping Gorge has remained fairly uncrowded. Visitor numbers are growing rapidly though, so you may want to go see it before it becomes overrun.

Currently, most visitors to the gorge take a bus tour along the river. To see the real beauty, however, you must take the higher road – literally. A 20-mile foot trail high on the northern side of the gorge lends itself to a multi-day trek through rivers, waterfalls, terraced pastures and bamboo forests. Hugging along one of the world’s most precipitous drops (left) the entire way through, this hike is not for the faint of heart. Most people take two days to complete the trek, some three. The trail encompasses a 2,300-foot elevation gain and can last anywhere from 13 to 20+ miles depending on the chosen end point.

Public buses from Lijiang run regularly to the trailhead.

A more convenient option is to take a shuttle arranged by one of the guesthouses in the area, most famously Tina’s Guesthouse. The shuttle picks up from Lijiang, stops at the trailhead, and provides a ride back at the end. It also takes and stores the hiker’s luggage at the guesthouse located at the trail’s end. So all you have to bring is a light daypack with essentials. Another advantage to the shuttle is the guarantee that you will start the hike with others. You won’t get lost alone: an invaluable peace of mind. 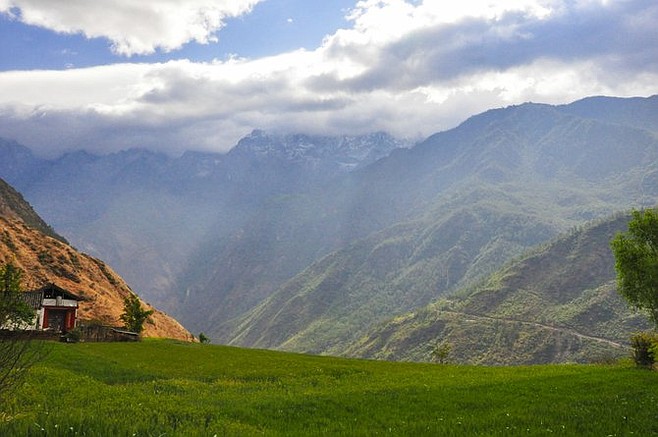 Getting lost is a legitimate concern for a first-timer. The only trail maps available are rudimentary drawings provided by the guesthouses running the shuttles. Official trail maps do not exist as yet. Once there, though, the trail is easily visible and fairly maintained, since the local Naxi tribesmen use it themselves to walk from village to village. It can be quite narrow (eight inches) in some spots, there’s loose footing on a few descents, but overall, it’s not a technically difficult trail.

First part of the morning runs through verdant wheat pastures followed by moderately steep rocky terrain lined with patchy pine. The scenery is superb, and at this point it’s relatively easy to enjoy the view, take photos and continue at a steady pace. There are several guesthouses along this section to stock up on water and supplies. By mid-morning the trail is etched alongside the mountain’s edge with spectacular sights of the gorge. 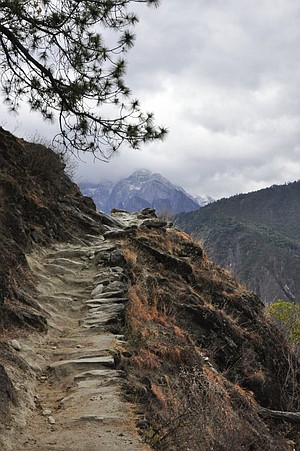 An especially grueling section named Twenty-Eight Bends is encountered: 28 steep, ascending switchbacks snaking consecutively up the mountainside. No one is really sure where these bends start or end. By the time I count 17 bends I see scrawling on a rock that reads “Get ready for the next 28 bends!”

Suffice to say there are plenty of bends to get your back bent.

Not to fear, however: China’s most brilliant entrepreneurs are on hand to help. Several local men hang out at the trailhead and tag behind hikers with their donkeys in tow. Anytime you need a ride, all you have to do is hand over a few Yuan. At the beginning of the trail, when no one wants the ride, it costs merely a few Yuan. The farther out it gets, the higher the price. By the time 28 bends is reached and hikers desperately need the ride, the price is quadrupled. Brilliant.

After the 28 bends the trail flattens out, and the rest of the day becomes easier. Most hikers end up at the aptly named Halfway House guesthouse on the trail by early evening, in time for a beautiful sunset on top the deck. As another hiker puts it, it’s simply “postcard perfect.” 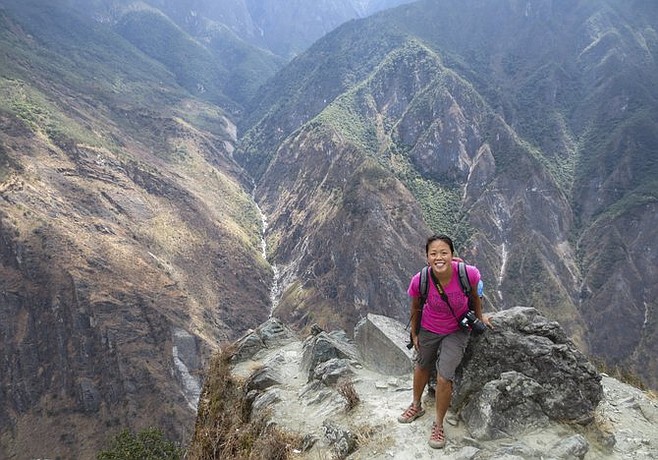 Gorge below, smiles above.

The second day is less strenuous, with mainly gradual climbs or flat terrain. There are some stream crossings, and a waterfall that flows directly over the trail. By early afternoon hikers reach the popular end to the trail, at Tina’s Guesthouse.

There are alternate trails to continue onwards, including one with a loop through a bamboo forest leading to a small beach by the river. Talk to locals before embarking on the side trails, though; I decide to take on the detour with two others, only to find ourselves clambering over a recent landslide (unsafe) and having to turn around.

At the end of the high trail is the start of a lower trail that leads to the river’s edge. Here the canyon is at its narrowest and the rapids at their most violent. According to legend, the gorge was named when a tiger came to the river’s edge at this spot, saw a flat rock mid-stream amidst the rapids, and leapt across. The lower trail is steep and slippery, and there’s a small charge to use the ladders set up by the locals. Worth a look if there’s time before your shuttle ride back to Lijiang. 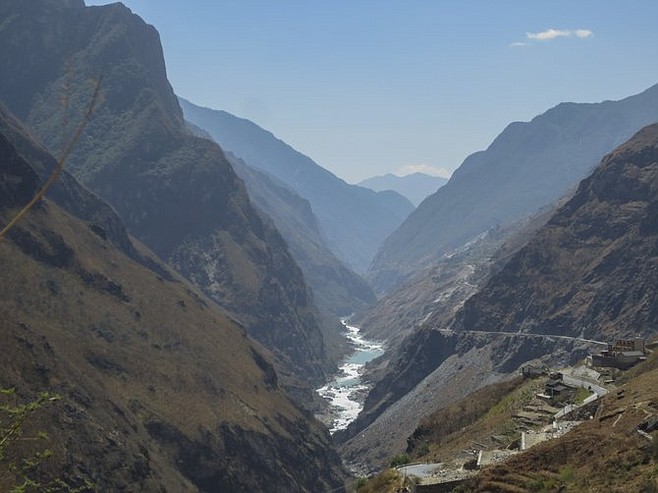 Looking from the trail’s end back towards the start.

In the spring and fall, an average of fifteen hikers can be found on the high trail in either direction. In the summer, that number increases significantly, although summers are rainy, rendering the trail muddy and more dangerous.

So if you’re looking for some solitude in the world’s most populous country, some exercise and a bit of adventure, the Tiger Leaping Gorge high trail is for you.

And don’t worry – there are no actual tigers here.