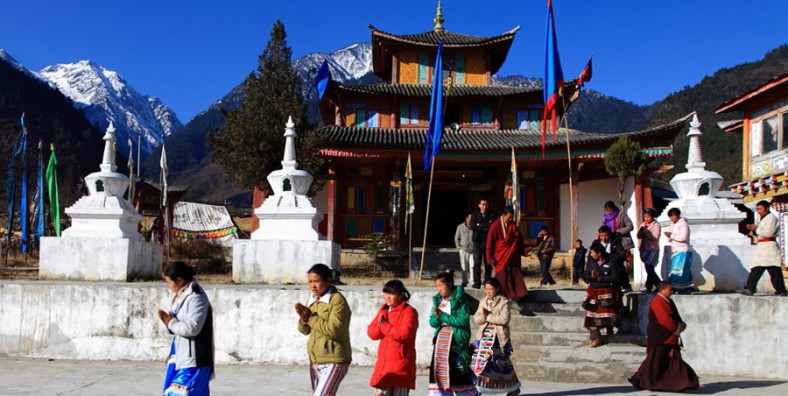 Puhua Temple, the only Tibetan Buddhism temple in Nujiang Lisu Autonomous Prefecture. It enjoys a high prestige, with people of Han, Nu, Lisu and other nationalities coming to worship every day.

Nujiang Puhua temple also called Lama temple, belongs to Tibetan Buddhism Temple, located in Dongfeng Village of Bingzhongluo, Gongshan county, Nujiang Prefecture, Yunnan province. There are 11 wall paintings under the porch and inner walls, more other 2000 small pictures of “Songji”. A clay sculpture of Buddha stands in the middle of two tigers and one lion. The whole temple is built in Tibetan style, simple but not primitive. 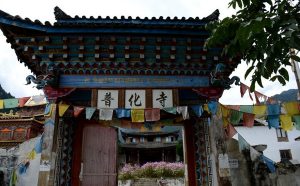 Founded more than 500 years ago, it is the only Buddhist temple of the Kagyu sect of Tibetan Buddhism. Built in 1766 by monks and it served the daily needs of the monks settled around the temple, gradually forming a village called Lama Zhong, meaning the village of monks. Impressed by the miraculous thing the monks were able to achieve, many Nu people living in nearby villages gradually become followers of Tibetan Buddhism. As a matter of fact, more than half of the forty-two registered monks of the temple are of Nu descent. It’s considered an honor for the Tibetan and Nu Buddhist families to send a son to the temple.

It is now the residence of the fifth living Buddha – Langqiu(朗秋). In the past, Puhua temple was in disrepair, and its buildings were inclined and leaking rain. Over the past few years, the living Buddha has worked hard for the restoration of the temple and received some great support. Today’s Puhua temple has returned to its former style.

Yunnan province is a multi-ethnic place. The residents near Puhua temple are mainly ethnic minorities such as Tibetan, Nu, Lisu, Dulong and Naxi. Although they are different nationalities, they all believe in Tibetan Buddhism and have firm confidence. Langqiu living Buddha has worked for the harmony and development of all the ethnic groups, with his compassion and wisdom to educate the local residents and believers. When the white tower comes to light, the Buddhist lights of Puhua temple appear in the sky. May the Buddhist lights of Puhua temple always shine in the minds of the multi-ethnic and multi-cultural people living in the parallel flow of the three rivers. May Tibetan Buddhism continue to develop under the light of wisdom of the living Buddha of Langqiu.

After arrive at Bingzhongluo, tourists can hike to the Puhua Temple or take a chartered car to. 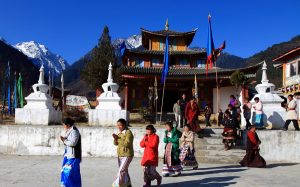 ► Shimen Pass seems more dangerous if be seen from Puhua Temple. This location is better than the bank of Nu River.
► Puhua temple is usually locked, you can go to the side small room to ask the Lama to open the door.
► There is no ticket for Puhua temple, but just give some money to maintain the temple.
► Outside Puhua temple is the famous First Bend of the Nu river.
► The main activities of Puhua temple are the “Gedou Festival”, which falls on the 25th to 29th days of the lunar 12th month, and the “Youjing Festival”, which falls on the 15th day of the lunar 6th month.