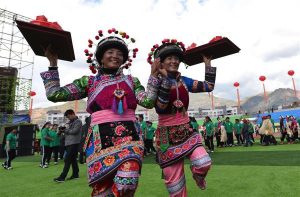 Tiaocai Dance” is also known as “lifting the dish dance” (called “Wu Cheba（吾切巴）” in the Yi language ). It is a one that dances to honor guests and increase the atmosphere of joy when serving in the banquet of the Yi Ethnic Minority in Nanjian （南涧县）,Customary etiquette dance. people from the kitchen to the table are accompanied by music beats, dancing the unique dance steps of the Yi people, and humorously placing a dance, music and diet in a “chess” style.

“Dance between the tables”,also known as “mealing and dance” or “sudden dance”, is a major occasion for Nanjian people in wedding celebrations, bulid new houses, welcoming guests, and birthdays for the old peoples. Dish, “eat and be happy.”

“The stage dance” is the staged performance of the tiaocai, which are performed by the Nanjian peasants. The actors are usually around 20 people, and the number of actors is up to 100. The dance moves are bold and bold, strong and powerful, and the voice is high and bright. The “square-hopping dishes” actors are dozens of people, and many can reach hundreds of people, reflecting a magnificent, neat and harmonious artistic effect. 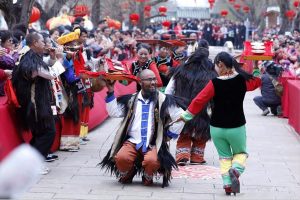 In March 2003, the Ministry of Culture officially named Nanjian County as the “Hometown of Chinese Tiaocai Dance Art”. In 2008, “Nanjian Tiaocai Dance” was announced by the State Council as the second batch of national  intangible cultural heritage protection projects. Since being moved to the stage by Nanjian native artists in April 1991, he has won numerous national, provincial and state music and dance awards.