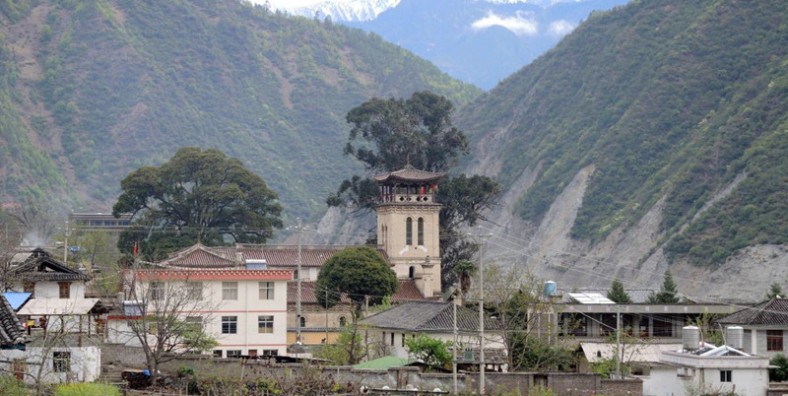 Cizhong, a Tibetan word meaning a big village, is a village co-inhabited by Tibetan, Naxi, and Chinese Han. It is famous for a 100-year-old Cizhong Catholic Church. More than 100 years ago, French missionaries built a Catholic church here.

Best Time to Visit: March to May and June to August

Why is Cizhong Village So Special?

Cizhong, a Tibetan word meaning a big village, is a village co-inhabited by Tibetan, Naxi, and Chinese Han. It is famous for a 100-year-old Cizhong Catholic Church. More than 100 years ago, French missionaries built a Catholic church here. There are seven ethnic groups in Cizhong Village, including Tibetan, Han, Lisu, Naxi, Bai and Nu. Today the relationship between Tibetan Catholics and Tibetan Buddhists is generally cordial. The two communities celebrate traditional festivals together and interfaith marriages are no longer rare.

Where is Cizhong Village – Location

The climate in Cizhong belongs to cold temperate mountain monsoon climate. The climate is greatly affected by altitude. The latitude effect is not obvious. As the altitude rises, the temperature decreases and the precipitation increases. Most of the seasons are unclear. The winter is long and the summer is short. The dry season and wet season are usually obvious. The average annual rainfall is 633.7 mm. The precipitation in the rainy season from May to October accounts for 77.5% of the annual precipitation. 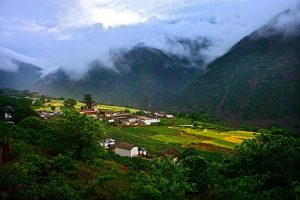 Tourists need to get to Shangrila first and then transfer to Deqin county. Long-distance bus is the main transport means getting to Cizhong Village. Every day, there are many shuttle buses to Cizhong from Deqin County. The last bus from Deqin to Cizhong is 3 p.m.

It is a French Catholic church, first established in the 6th year of Tongzhi in the Qing Dynasty (A.D.1867). The church is constituted with French buildings and Chinese pavilions, special in architecture. It is one of Yunnan’s most important churches.

A good rest plays a significant part in a travel, so choosing a favored lodging place in Cizhong Village should be taken into account. Most local families can offer accommodation. Here we recommend Songtsam Cizhong Lodge, Deqin Qianxi Hotel.

Yubeng Village
Yubeng Village is situated at the foot of the Meili Snow Mountain Range. From Upper Yubeng, trekkers have access to the Base Camp, and Ice Lake hikes. From Lower Yubeng, you can find the paths to the Sacred Waterfall, and if you are a hardcore hiker, Holy Lake, which from a higher vantage point, has an unobstructed view of the Kawa Karpo Peak (6,740 meters), and most of the rest of the mountain range.

Feilaisi Monastery, Deqin
Feilai temple, the best place to watch goden peaks of Meili mountain at sunrise. So if u plan to watch sunrise, it’s absolutely a good idea to live at Feilai temple the night before. But actually it is unusual to see the golden peaks. The peaks of the mountains are often surrounded with clouds due to the high altitude they are. And this makes more interesting for Meili.

►Many villagers have their own wine. Tourists can have a taste if interested.
► Respect local customs and culture.