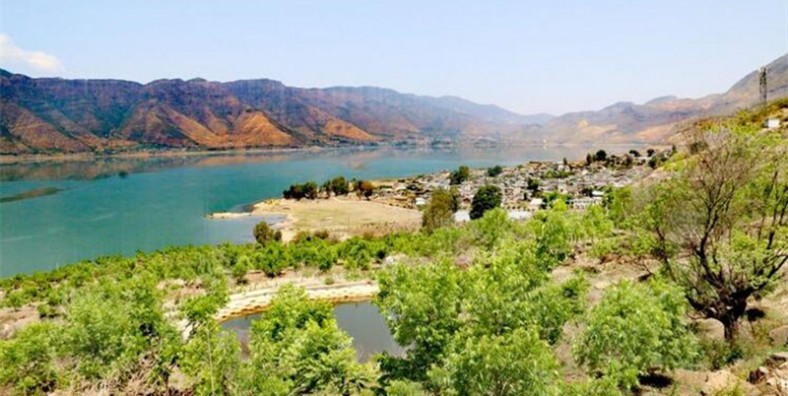 Situated in the middle of Yongsheng County, Yunnan Province, Chenghai Lake which is also called Heiwuhai is wide in the north and south but narrow in the opposite direction. It is the second largest freshwater lake in western Yunnan as well as one of the three major lakes in the world. Geologically, it is a kind of Diastrophic Lake formed in the middle Cenozoic tertiary period about 12 million years ago when the graben shaped because of the Himalayan orogeny, and hence the water accumulated into the graben to form the lake. 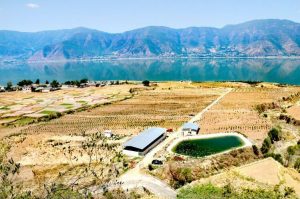 There are three natural sulphur mineral springs in the south bank of Chenghai Lake.  The clean in the north side is regarded as the ideal resort for natural bathing and the plateau training place for aquatic sports. In 1988, Chenghai Lake became the world’s most famous “Blue Treasure Lake” when people successfully bred artificial spirulina using the fresh water in the lake.
The most striking thing about Chenghai Lake is the rare natural spirulina which is a unique in Yunnan and even China. At present, there are only three watersheds in the world that grow such kind of unique algae, one is the Tankers Lake in Mexico, the other is Lake Chad in Africa, and the third is Chenghai Lake in Yongsheng County. In 1985, Yunnan university “alpine lake ecological investigation” first discovered Chenghai spirulina groups. Every summer, Chenghai Lake will turn blue-green with a special fragrance, commonly known as “Xiangshuimian”（香水面）, which is a special consor product called “algal bloom” of the natural spirulina.

Lake chenghai, which flow to the jinsha River, the total length of 38 km.At the end of Emperor Qianlong in Qing dynasty, water drop cannot be dredged.But still have Jiulong spring , Qingyi spring ,empties into the river.

What to see in Chenghai Lake 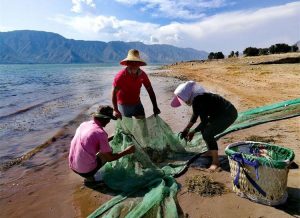 Chenghai Lake is not only rich in fish, but also beautiful and attractive in scenery. To travel in the boat, tourists can view nothing but the vast shining water and the mysterious frog; to walk along the green coastal terraces, visitors can see hundreds of cottages, as if entering a picturesque wonderland. There is no frost in the four seasons. The beaches in the northern bay are soft and clean, which can be used for swimming and other aquatic entertainment. The existing roads in the west bank of Chenghai Lake connect north and south, to provide a quite convenient transportation. This beautiful and treasure place is great resort.

What are features in Chenghai Lake?

Chenghai Lake is filled with a strong ethnic customs. Yi people living in Jinlan village will celebrate the thrilling and exciting “sword-pole climbing and plunging into a sea of flames” festival which will amazes the visitors beyond our expression.

How to get Chenghai Lake from Lijiang Ancient Town

Drive a chartered bus to Chenghai Lake for three and a half hours from Lijiang Ancient Town.

Jade Dragon Snow Mountain is a mountain massif near Lijiang. It is the southernmost glacier in the Northern Hemisphere. There are 13 peaks all together and the group of mountains stretches about 35 kilometers from north to south. The highest peak is named Shanzidou at an altitude of 5,596m. On the eastern side of Jade Dragon Snow Mountain, there is a deep valley where the Yangtze River runs. Tiger Leaping Gorge is in the northern part of the valley and Yuhu Village Is located in the south of the valley. Travelers can see Jade Dragon Snow Mountain over Tiger Leaping Gorge, Yuhu Village, Black Dragon Pool Park and other locations.

Haba Snow Mountain is a mountain in southeast of Shangri-La, rising above the northwest side of Tiger Leaping Gorge, opposite off Jade Dragon Snow Mountain, with the highest peak of 5,396 m. It boasts glaciers, lakes and waterfalls and contains one of the best preserved nature reserves. Each year from June to August, millions of azaleas are in blossom. To avoid the rainy season, the best time to travel Haba Snow Mountain is mid-March to June, mid-September to mid-December