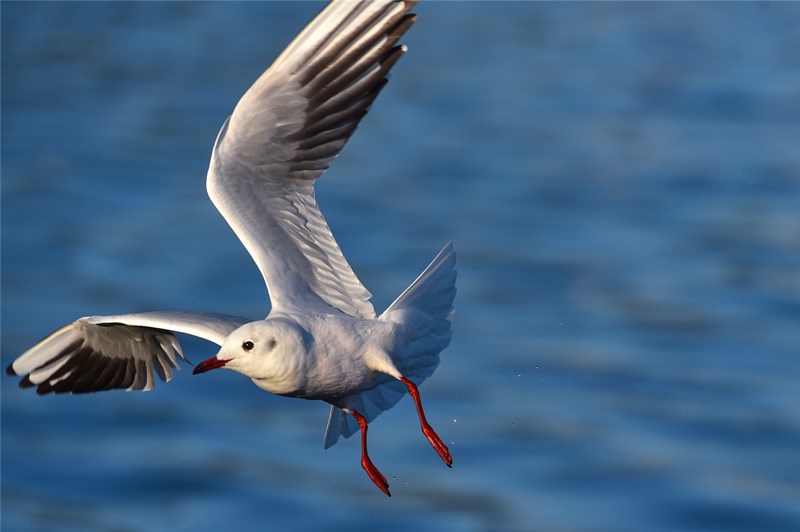 On October 1, a flock of over 300 white-feathered birds were spotted by Yang Ming along the bank of Dianchi Lake in Kunming. According to his experience from previous years, this heralds the annual return of Siberian seagulls that have been traveling to Kunming for a warmer winter over the last 35 years. Yang, a senior council member of the Kunming Birdwatching Association (BKA) told us: “Seagulls arrive earlier compared with before. It might be attributed to the severer climate in the north and their increasing familiarity with this migration route.”

Every winter, Kunming – nicknamed the Spring City of China – would welcome the return of tens of thousands of black-headed gulls after their far-flung journeys starting off in southern Siberia. Local residents regard these feathered guests as an unexpected gift of nature. And many of them still cannot forget November 12, 1985 – the exact date when nearly 10,000 seagulls appeared on the horizon and hovered around in the sky. It was the first time that these white little birds with orange peaks ever visited Kunming in large quantities. The citizens were appalled and soon mesmerized by such spectacle. 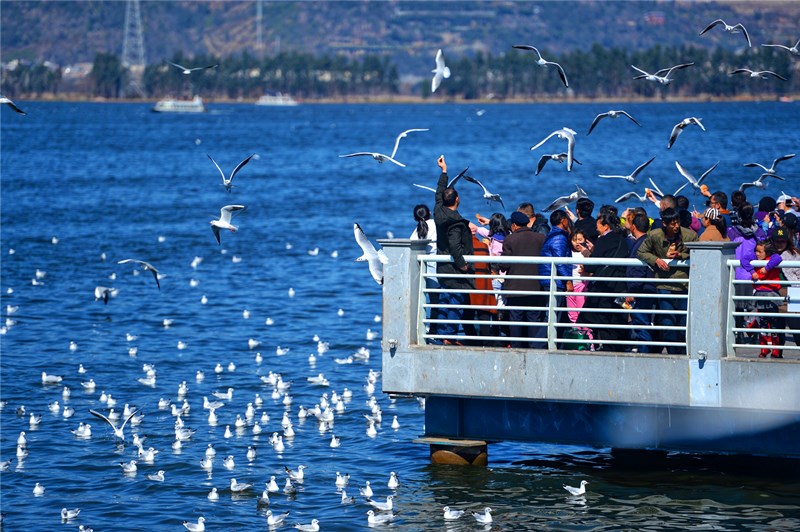 Zhang Liheng, a member of KBA recalled: “I was at Nantai Bridge in the downtown with my child when I saw them. I was excited and confused, because I couldn’t tell what birds they were. They looked like pigeons to me, but I knew I must be wrong.” Black-headed gulls, on the other hand, seemed more or less frightened by the crowd. They perched themselves on branches or rooftops, without accepting the sponge cakes, bums and baozi that people attempted to feed them with.

A local media report titled “Sea Birds Fly over the Panlong River” described the atmosphere as following: “The entire city has been livened up by the sudden appearance of large flocks of unknown seafowls.” Citizens simply called them “water pigeons”, though no one could tell who they were and where exactly they came from at that time.

This unusual phenomenon also triggered the interest of Wang Zijiang, a biology professor from Yunnan University. He quickly contacted his colleagues in the field of ornithology, and began conducting a research with them authorized by the municipal government. “It is interesting that in the Cuihu Park, when we tried to approach the birds and get a closer view of them, a number citizens came up and stopped us right away, because they thought we meant to hurt these tiny creatures.” As a researcher, professor Wang was certainly impressed by the affection of Kunming people to these new friends in the city, despite the fact that their work had been interrupted. 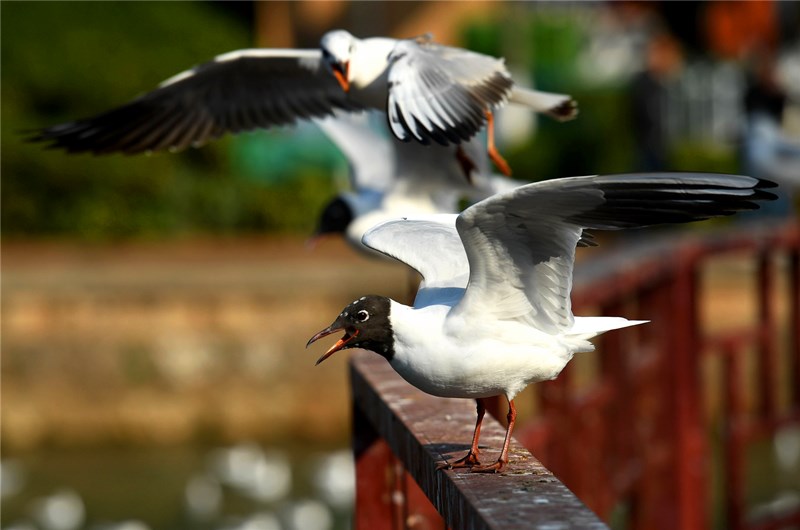 After the research, ornithologists confirmed that these so called “water pigeons” were actually black-headed gulls – a common type of migratory bird native to Europe and Asia. However, the question of how and why they traveled to Kunming still puzzled the researchers until a few months later. In 1986, a local bus driver found an injured black-headed gull in the street. He promptly sent it to the KBA. “The bird worn a metal leg band with a sign of ‘CCCP’ being inscribed on one side.” recalled Yang Ming. “Everybody knew that CCCP stands for the Soviet Union, so we soon sent the gull to the national Bird Center in Beijing for their opinions. Experts there told us it was indeed from the Baikal area of Russia.”

Why would black-headed gulls migrate so far to Kunming from south Siberia? According to Yang, safety and the availability of food and water are common factors to determine the habitat selection of most animals, including wild bird species. The Yangtze River Delta and east coast of China used to be major wintering destinations for migratory birds coming from the north. Unfortunately, since the country’s opening up and massive industrialization followed by, these two areas have experienced unprecedented ecological damage and environmental deterioration, which leave black-headed gulls and other wild birds with almost no choice but to travel further south until they reach Kunming. 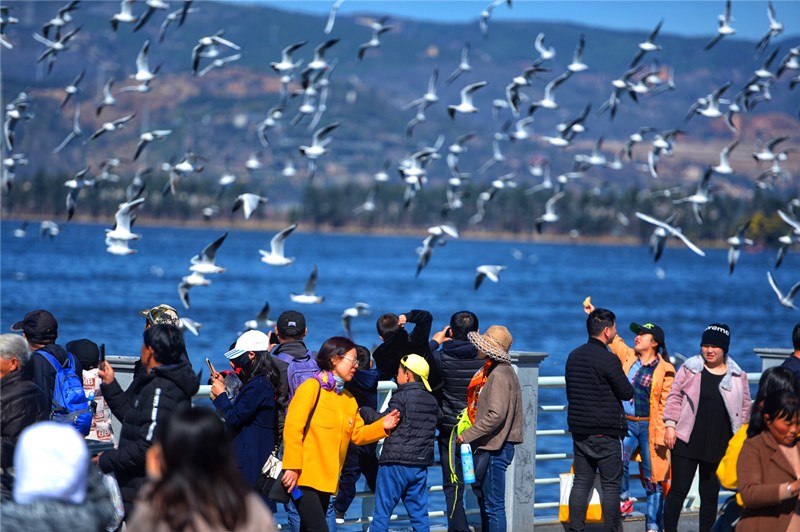 It is the spring-like climate all year around, little air and water contamination as well as kind and warm-hearted citizens here that have altogether made it an ideal winter home for them.

Generally speaking, black-headed gulls arrive in Kunming between October and December in a year, and inhabit around the city with a span up to six months until the end of May. For the past 35 years consecutively, the return of gulls – like an annually-held ritual – has again and again invigorated its urban life, and these adorable birds, in turn, are reckoned as the synonym of Kunming.

“Both tourists and local citizens like to call them ‘seagulls’, said Yang Ming. “But seagull is a very broad definition which can refer to a number of bird species, including brown-headed gull, herring gull as well as black-headed gull.” It is not deniable that the latter, however, might indeed be the most identifiable one, simply because of their orange peaks. Compared with black-headed gulls, herring gulls are larger in sizes. 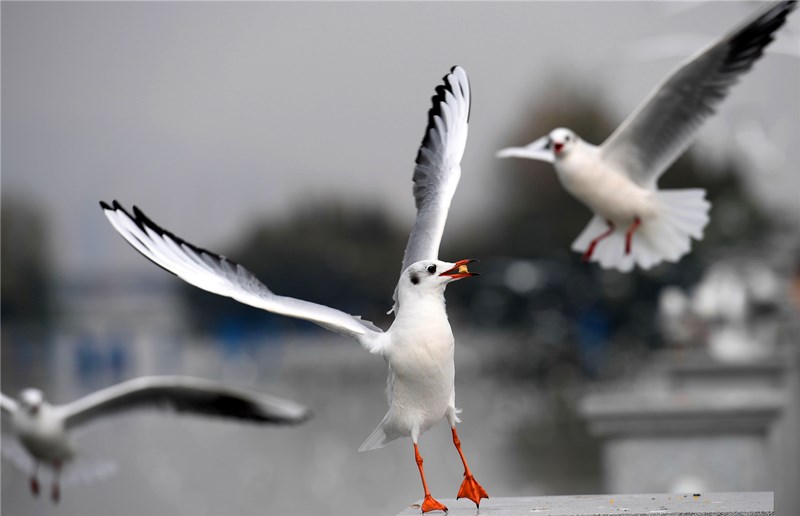 In the past few years, a series of scientific methods have been employed by the KBA to investigate the behaviors of black-headed gulls, such as field observation and diet analysis. Seagulls are known for their wide choice of food substances. “The ones in Kunming mainly feed on small fish and shrimps, but they have also got used to starchy food prepared by citizens, like bread, biscuit, cake and baozi,” said Wang Zijiang. In addition, local enterprises have been commissioned to produce a special kind of bread containing fish protein. Gulls thus can enjoy their nutritionally-tailored meals.

As migratory birds, the breeding and wintering grounds of black-headed gulls are normally separated from each other. KBA Experts once conducted a joint experiment with the Kunming Zoo. The result suggests that black-headed gulls hardly mate in Kunming, even if they are no longer able to migrate due to injuries or illnesses. 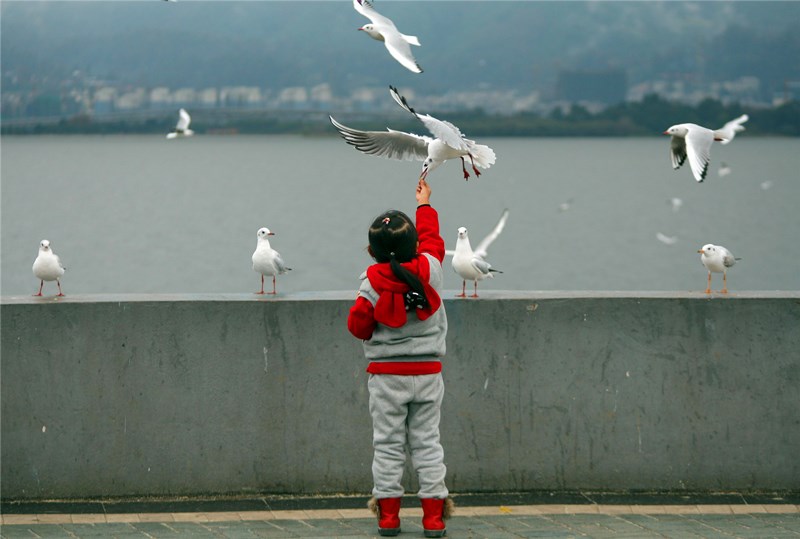 Each February marks the molting season of seagulls when the snow-white feathers start to lose and be replaced by newly-grown black plumage covering not only their bodies and wings, but necks and foreheads. This is where the name “black-headed gulls” derives from. “To be honest, the feathers on their heads look like black caps. When these caps appear, we know seagulls are about to leave Kunming, and we will have to wait another year before they come back again.”

Are They Really from Siberia?

For a considerably long time, most experts – as well as citizens – are inclined to believe that black-headed gulls are from Siberia, or at least somewhere in Russia. Yet, in Yang’s point of view, this is apparently an oversimplified answer. “Western Siberia is a likely origin of these gulls, but nothing can be corroborated until more evidences turn up,” said him. “We should not rule out other possibilities at this stage”. 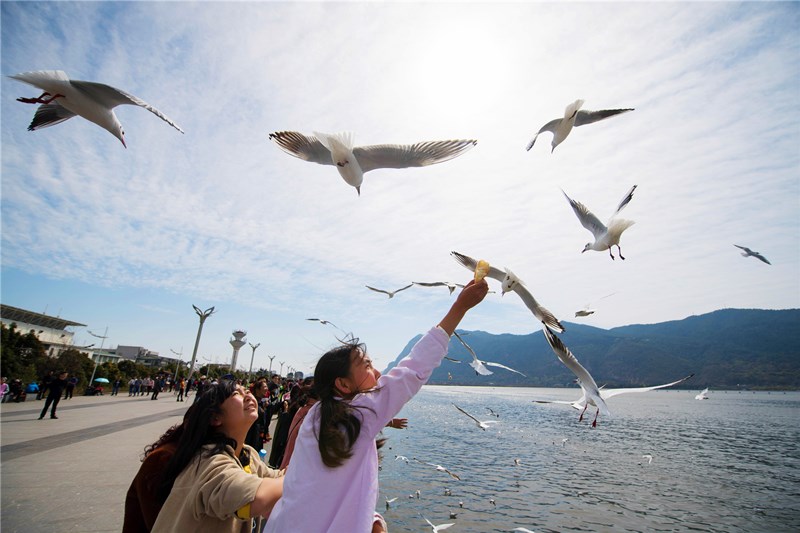 In 2014, the Kunming Broadcasting and Television Company initiated a public education program, with an aim to precisely track the migratory routes of black-headed gulls. Mini GPS devices were fixed on the bodies of ten birds.

“According to international conventions regarding the protection of bird species, no research equipment weighing more than 3 percent of the bird’s live weight is allowed to be applied; otherwise, the migration ability of it would be affected,” introduced by Zhao Xuebing, the secretary-general of KBA. In other words, black-headed gulls in Kunming should not carry anything over 1.5g. Once right-sized GPS trackers were found and ready to be put into use, these “tiny bags” would, for the first time, help scientists find out seagulls’ ways of going back home.

Through investigation, three major migratory routes were mapped out by ornithologists. The first, starting from Kunming to the Bakal area via several parts of China – encompassing Sichuan, Shanxi, Ningxia and Inner Mongolia – is the most known one among the public. The second, instead of traveling all the way up to Russia, halts near two saline lakes in Mongolia, namely Uvs and Khyargas, while the last route indicates that gulls also end their journey around the Bosten Lake in Xinjiang, northwest China, after flying over Sichuan, Qinghai and Gansu provinces. 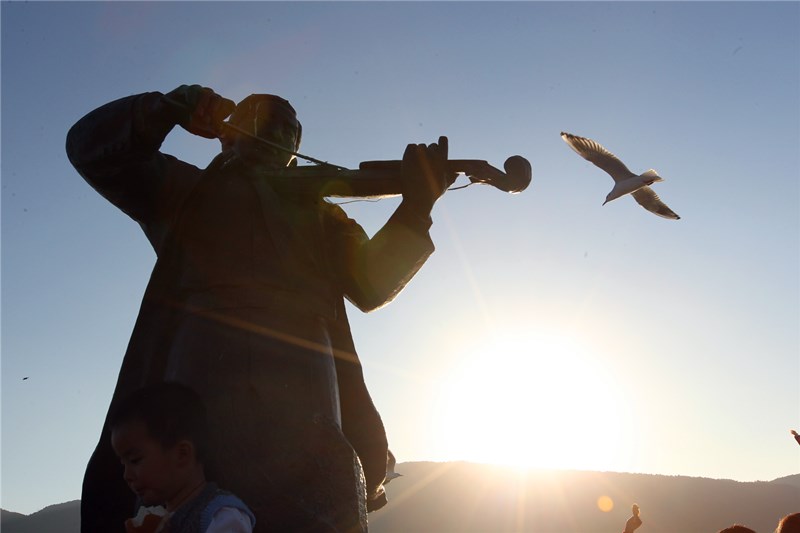 As this research continues, a new migratory route has recently been discovered by the KBA in November. Experts believe that some black-headed gulls may travel even further to the Vilyuy River, a place only some 300 kilometers away from the Arctic Circle in central Siberia.

Today, we can almost say that the decade-long riddle of where Kunming’s seagulls come from has been unraveled. “I believe that new data and knowledge will lead us to better understand and protest these lovely ‘water pigeons’”, said Zhao.

King Word International Hotel in Kunming
Paris - Kunming Flights
World Expo 52 ℃ Forest Health Spa in Kunming
Is There a High-Speed Train to Yunnan from Beijing, Shanghai, Chengdu, Xian, or Other Cities of Mainland China?
14 Days Best Yunnan Motorcycle Tours with Three Parallel Rivers Adventure
How to Get to Western Hill from Kunming City
Yuantong Temple, Kunming
How to Get to Luoping County from Kunming