Dai Ethnic Minority  have been fond of pottery since ancient time . Up to now, traditional pottery manufacturing skills have been reserved in many villages of Xishuangbanna Dai Autonomous Prefecture.The slow-wheel pottery manufacturing skills entered the list of national intangible cultural heritages in 2006. Dai people  is widely used in daily production, life and Buddhist activities. 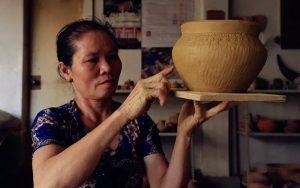 Pottery making is also called “plate mill” in Dai language , commonly known as “earthen pot”. The main varieties are pots, pots, steamers, pots and so on, among which earthen pots are the most famous. The earthen pot cooked by traditional pottery method is easy to cook and delicious, while the water is refreshing and refreshing. The decoction can maintain the best medicinal properties, and is popular with local people. The craftsmanship is characterized by slow wheel hand craftsmanship, and the surface of the objects is printed with engraved wooden pats, which is very similar to the Neolithic pottery unearthed in the south. 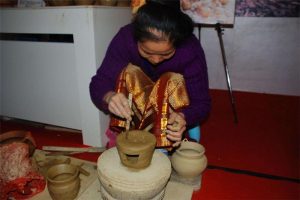 Dai  People’s pottery is made by women. In order not to spread its skills, some places still follow the custom of making pottery, which is not passed on to their children, but only to their daughters-in-law. Up to now, archaeologists and ethnologists at home and abroad have investigated this technology. It is generally believed that traditional Dai ceramics have become a breakthrough in understanding Chinese Neolithic ceramics technology and represent the oldest ceramics in China.