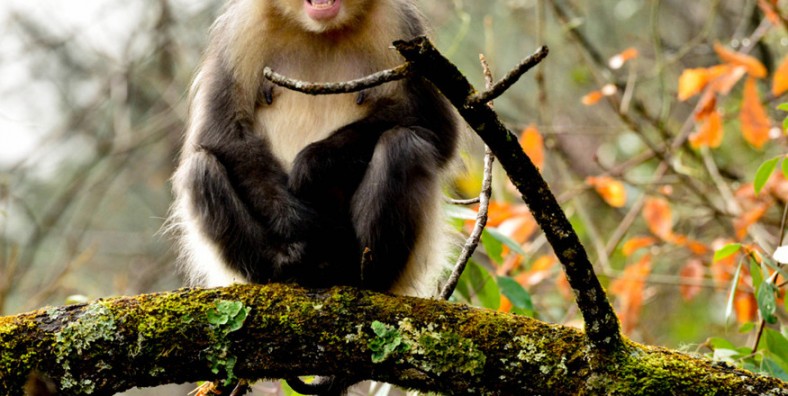 Black snub-nosed monkey, also known as the Yunnan golden monkey, is an endangered species of primate endemic to China. Tacheng Black Snub-Nosed Monkey National Park in Weixi County covers an area of 334.16 square kilometers and it is a paradise on earth where people and nature, also people and people live in harmony.

Why is Yunnan Black Snub-Nosed Monkey National Park So Special?

As a national park integrating primitive ecology, Neolithic sites, religious pilgrimage place, paradise of black snub-nosed monkey and multi-national style, the scenic area is particularly distinguished with the religious culture and temple scenic spots such as the dense forest, valuable and rare animals and Patriarch Bodhidharma’s Cave as well as “Re Ba” of Tibetans and customs of Lisu Nationality. Samage Nature Reserve has hundreds of(800-1000) black snub-nosed monkeys, which have been listed as one of the first-class state protected animals.

In addition, as a original ecological park and best-preserved vegetation, we can see others rare wild animals in the park such as clouded leopards, golden eagles, black bears, monkeys, golden pheasant, etc.

Tacheng Black Snub-nosed Monkey National Park is one of the thre national parks in Diqing Prefecture of Yunnan Province. 40 million years ago, two continents collided sharply, forming the unique geological structure, the largest concentration of Eurasia biodiversity, the abundant human resources, and the magic and beautiful natural scenery, which constituted the world’s only peculiar natural landscape and retained many of the world’s only amazing species. Yunnan golden monkey is one of the most valuable and the most representative species among them. It is as famous as the national treasure giant panda and is also a unique species in China.

Tourists can take the public bus from Shangrila or Lijiang to Tacheng or rent a car to arrive Tacheng Black Snub-Nosed Monkey National Park. Yunnan Exploration Travel provides the car-rental service for you with the best skilled driver and vehicle.

What to See at Yunnan Black Snub-Nosed Monkey National Park? 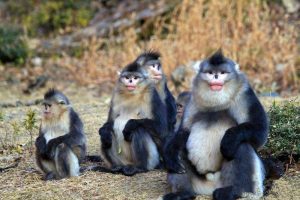 The black snub-nosed monkey lives in bulk population based on the family unit with the number of 20 to 60. It is a large, stocky and well-furred primate. Different from the snub-nosed monkey we have known before, its body color is black and it lives and multiplies in the alpine coniferous forests in Yunnan and Tibet with the altitude of over 3,000 meters above the sea level. Moreover, the survival of the black snub-nosed monkey was threatened by habitat loss and hunting in earlier years. Therefore, it was recognized and protected by people lately.

Besides, tourists can see others rare wild animals in the park such as clouded leopards, golden eagles, black bears, monkeys, golden pheasant, etc.

The area for money watching is located at the half way of the mountain(about 3,000 meters above sea level), so tourists can take the sightseeing bus at the entrance of the park to the watching spot.

Everyday at 9:00-9:30 am, it is a time for rangers to feed the moneys, also the best time for visitors to watch them. The feeding continued until nearly 11 o ‘clock, during the time the observation area is so busy. Then the monkeys would gradually move further up the mountain in search of more food. So if you come to the park after 11 o ‘clock, there’s almost no chance of seeing a lot of golden monkeys.

To see these rare monkeys, one must go to the park early in the morning. It is recommended to arrive in Tacheng town early and stay overnight in the town. 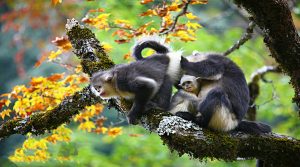 The park is located at the Lapu Valley with mild climate. So it can also be visited even during the snowy days in the winter. While the best traveling time is the late spring and early summer.

Napahai Lake
With a total area of 31.25 square kilometers and an elevation of 3266 meters, the state-designated wetlands area Napahai Nature Reserve is located in Shangri-la city, Yunnan province. Established in 1984, it is a wetland ecosystem protection zone to plateau seasonal lakes and marsh meadows. The natural reserve is flat, surrounded by mountains. When October steps in, flocks of black-necked cranes, bar-headed geese, white cranes, sheldrakes regularly come here looking for food and for fun.

► Don’t litter in the park, which the golden monkey may eat.

► Do not feed the golden monkey.

► Follow the instructions of the staff and don’t get too close to the golden monkey.