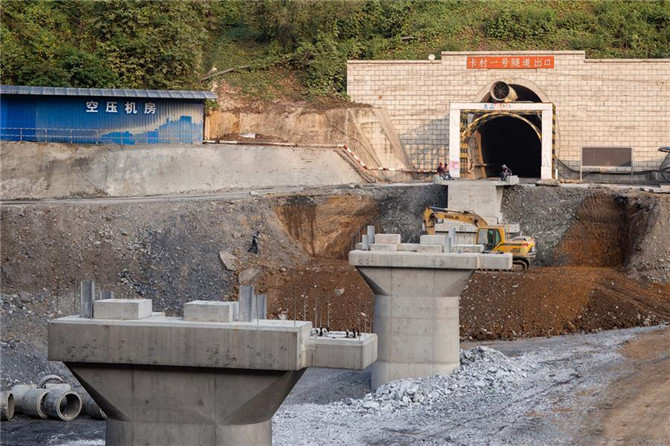 China-Laos railway tunnels’ construction has been continuing to make lots of breakthroughs as one more major tunnel was drilled through on Friday in the tropical mountains of northern Laos.

This marks another important milestone in the tunnel construction of the China-Laos railway. With a length of 4,585 meters, it is the second longest tunnel on the rarely-inhabited peninsula area half-circled by the Mekong River.

The Mekong River runs around an area north to Luang Prabang city, creating a peninsula surrounded by water and mountains, where there had been no power supply before the railway construction kicked off three years ago.

The poor transportation infrastructure, without bridges connecting to nearby Luang Prabang and roads in the area, the living and production conditions on the peninsula have been quite hard.

What’s more, the Ban Ka No. 1 Tunnel has to pass through unfavorable geology, creating lots of difficulties to the Chinese engineering company, CREC-8. It is listed as a high-risk, difficult and bottle-neck project for the China-Laos railway construction.

The surrounding rocks of the tunnel are not strong and tend to get broken easily, while the rock formation where the tunnel goes through is complex and variable, with many karst sections and faults. With high geothermal heat and high stress around, the tunnel is extremely easy to meet deformation and collapse during construction.

During construction, hydraulic discharge and mud cleaning have brought difficulties to the Chinese engineers.

However, with efforts made by the Chinese and Lao sides, the tunnel’s construction was Carried out scientifically, and rapidly. last May, the CREC-8 once achieved the first place along the railway with over 1,000 meters bored into a tunnel from a single working face in the Ban Ka No. 1 Tunnel, which also laid the foundation for its Friday completion.

According to a mobilizing meeting for the dry season’s work held in Vientiane in October, by the Laos-China Railway Co. Ltd (LCRC), which is in charge of the railway’s construction and operation project, 79 percent of the civil engineering work contract volume has been completed till then, while breakthroughs have been made in lots of key and bottle-neck projects.

Especially for the tunnel construction, the China-Laos railway has holed through around 40 tunnels so far, out of its 76 tunnels with total length of 198 km.

The Boten Tunnel, the first major tunnel over 5,000 meters along the China-Laos railway was drilled through on March 21, 2019 by China Railway No. 5 Engineering Group (CREC-5). In October, 2018, the CREC-5 also completed the first over-1,000-meter tunnel along the China-Laos railway, the Nateuy No. 1 Tunnel with a length of 1,158 meters, some 360 km north of Lao capital Vientiane.

In February, 2018, the Chinse engineering companies started inside-tunnel construction for all major tunnels along the China-Laos railway, and started construction of all over-one-kilometer tunnels.

In December 2017, Ban Somsanook No. 2 Tunnel with a length of 301 meters in Laos’ Vientiane Province, was bored by the Chinese project contractor Sino Corporation Engineering Bureau 15 Co., Ltd., and became the first completed tunnel along the China-Laos railway, and the first road and railway tunnel in Lao history.

The China-Laos Railway is a strategic docking project between the China-proposed Belt and Road Initiative and Laos’ strategy to convert from a landlocked country to a land-linked hub. The 414.332-km railway, with 198-km tunnels and 62-km bridges, will run from Boten border gate in northern Laos, bordering China, to Vientiane with an operating speed of 160 km per hour.

The electrified passenger and cargo railway is built with the full application of Chinese management and technical standards. 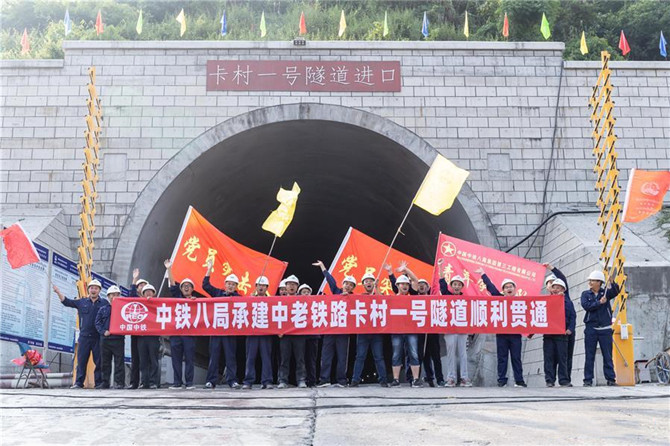