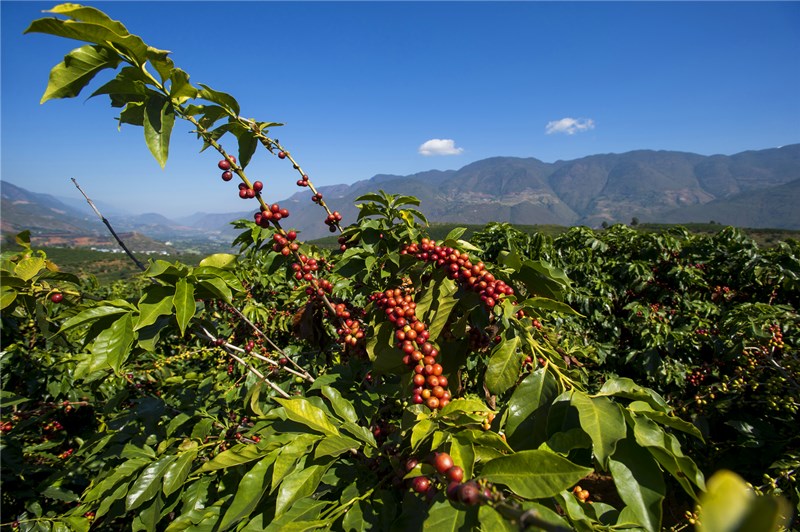 Over 120 years ago in 1892, Alfred Liétard, a humble missionary from France travelled to the Binchuan county of Dali in today’s northwest Yunnan province. He carried some coffee seeds himself and planted them near a small mountainous village he passed by. Now, after several generations, Yunnan has grown to be the largest coffee producer across China, with totally 1.8 million mu (equal to 120,000 hectares) of coffee gardens and 400,000 tons of annual output. Major producing areas include Pu’er, Baoshan, Dehong, Lincang and Xishuangbanna. Thanks to the boom of coffee industry and its associated agro-tourism and agritainment business, local developments of these areas have been notably accelerated; coffee enterprises with national and international reputations have also emerged. A mature and well-functioning coffee supply chain which incorporates planting, processing, branding as well as sale and marketing has been set up at China’s southwestern gateway.

Xinzhai village, sitting at the foot of the renowned Gaoligong Mountain in western Yunnan’s Baoshan city, has long been hailed as the “Home of Chinese Coffee”. Arid and sweltering valleys, accompanied by sufficient sunlight all year round, provide a rather unique environment for the cultivation of Xiaoli (how Coffea Arabica L. is dubbed in China, meaning small grain) coffee- the typical coffee beans being grown in Yunnan. The village currently owns about 13,600 mu (approximately 907 hectares) of coffee farms, with over 2,000 residents involving in coffee-related works. 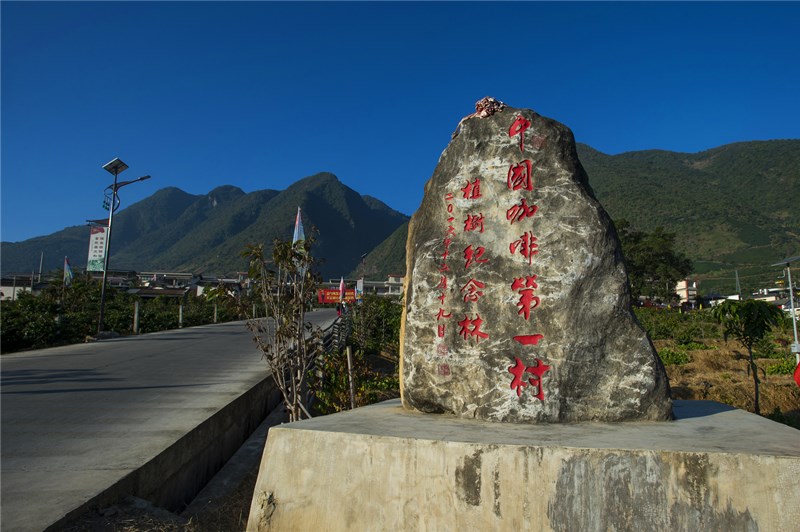 According to Wang Jiawei, the village secretary of the Party, Xinzhai is experiencing a tremendous industrial transformation and upgrade. The village endeavors to incorporate its coffee products with newly-developed agro-tourism and ethnic tourism, promoting coffee consumption through a series of cultural activities and events. The Baoshan Coffee Tourism and Cultural Festival, for example, has been held by the Municipal Government of Baoshan since 2016. Activities range from coffee-picking and brewing contests to walking and cycling tours across a number of coffee gardens.

During the festival of last year, Zhong Huandi, a former champion of the National Games of China and renowned Yunnan-born athlete of long-distance running, was invited to Baoshan as a guest. She joined thousands of running enthusiasts and coffee lovers, and ran together with them among coffee plantations. The local economy – particularly those hostels and catering businesses in Baoshan – has been greatly invigorated by coffee itself and the so called “coffee economy” in a broader sense.

“I came to know about Xinzhai and Yunnan’s abundant coffee resources many years ago via the Internet. And now I’m more than happy to see such prosperity brought by coffee growing. To me, coffee is something that can create endless business opportunities,” said Liu Hailong, a businessman and investor from Shenzhen who visited Xinzhai in 2018 for the first time.

“I decided to stay here and do something almost immediately,” he continued. In just one year time, several coffee farms and an exhibition center to display the history of Yunnan’s coffee industry have been swiftly built up by his team. Meanwhile, hostels and car campsites themed coffee culture are planned to be constructed. Investments from the outside – notably China’s coastal areas – have brought benefits to local coffee growers as well. Liu said that the average purchasing price for fresh and unroasted coffee beans remains around 10 yuan (approximately 1.4 US dollars), which means farmers can barely earn any money out of growing and collecting coffee. But since they elevate the the price to about 60 yuan (8.5 US dollars) per kilogram, farmers’ income has been largely increased.

Currently, the village has received investments from four domestic coffee companies. “I believe that the integration of coffee growing, processing and related agro-tourism has great potential to bring its development to a new height and create a lot more opportunities for us,” said Wang Jiewei with full confidence, in regard of the future of Xinzhai.

In Search of “fine coffee” 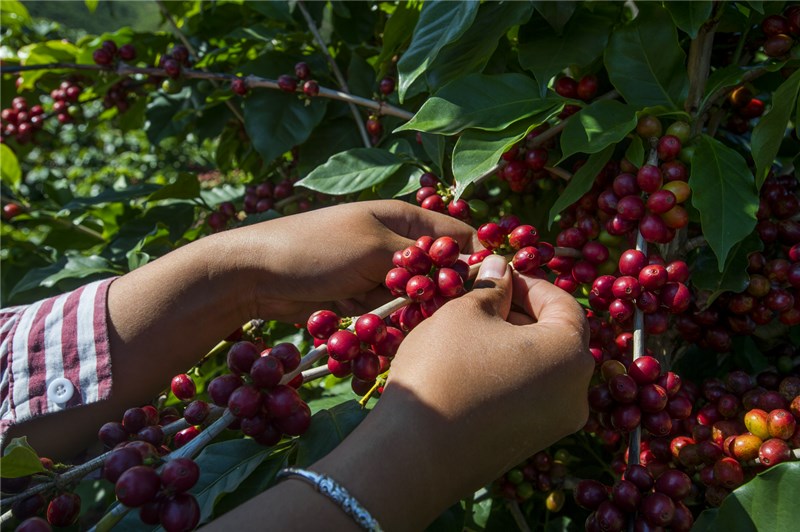 As one cradle of Chinese coffee, the Pu’er city in southwest Yunnan has a long history of growing coffee, compared with other areas of China. In the early 1980s, Nestlé – the Swiss food and beverage conglomerate -started to dispatch groups of coffee experts to Pu’er, instructing local farmers how to grow coffee plants carefully and then collect and process their fruits. It is fair to say that this was where the modern history of Yunnan coffee began. Featuring high productivity and resistance to pests, Catimor – as a cross between Timor and Calturra- has dominated the coffee being cultivated in Yunnan ever since. It also acquires enormous popularity among domestic consumers, even though its taste can hardly be considered perfect. Indeed, the commercial influence of Catimor never seems to be swayed by this. But it is very likely to hinder the quality improvement of Yunnan’s coffee and undermine its international reputation in a long run.

“Most of our elder farmers have never tasted the coffee they grow themselves, and know almost nothing about modern processing. The methods they use are those of decades ago,” said Hua Runmei, the youngest coffee grower in Pu’er who gave up job opportunities in Shanghai and returned home in 2015, after graduating from university. “I hope to elevate the quality of coffee in Pu’er and bring more what I call ‘fine coffee’ to the market.” 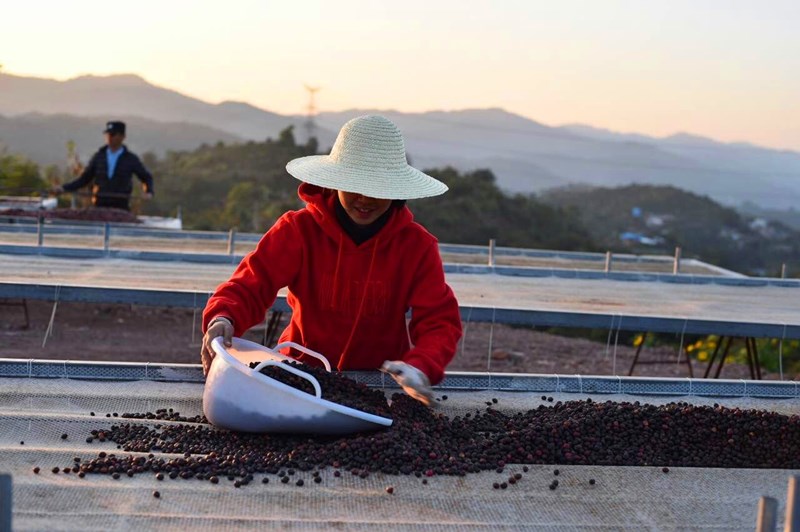 Changes began with ways of processing. “The elder generation barely knows any method out of fully washing, in terms processing green and fresh coffee beans,” said Hua. In order to improve coffee’s quality, she had to explain to the farmers how semi-washed, dry and honey processes worked in the first place. She also hosted coffee workshops at her place and taught them how to drink and appreciate different types of coffees. “Only when farmers know what coffee tastes like and how it should be drunk, the quality of our coffee products can be truly raised,” said she. Interestingly, most attendees said they had fell in love with coffee after several times of training; some were even able to taste coffee like connoissuers.

In 2018, Hua Runmei’s fine coffee beans were chosen by Seesaw, a Shanghai-based coffee house chain, and brought to eastern China. “The most obvious features of these beans are their moderate acidity and balanced flavor. We simply can’t wait to introduce them to our customers,” said a staff of Seesaw. So far, Seesaw has ordered over 20 tons of fresh coffee beans from Pu’er, with a purchase price that is three times higher than that of Nestlé and Starbucks – is major competitors. “Yunnan’s fine coffee business has just started off, but we are very optimistic about its future,” Hua concluded. 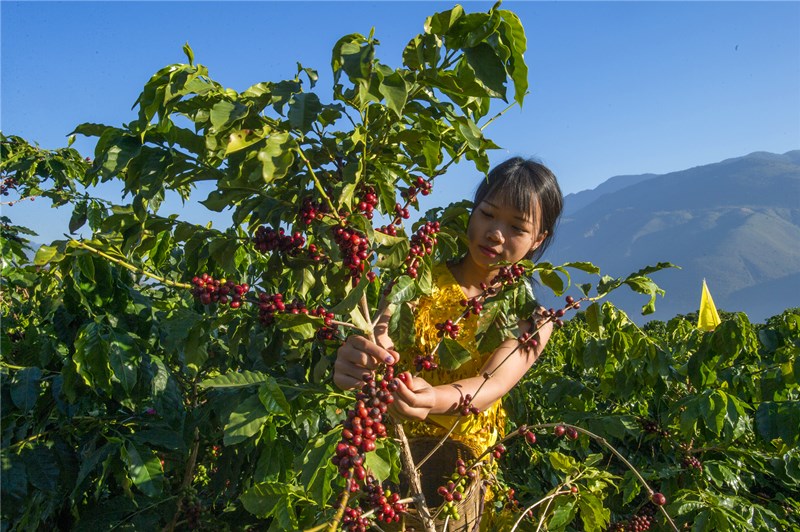 Hua apparently is not the only one who dedicates herself to promoting coffees of Yunnan on both national and international stages. In the of year of 2016, the Yunnan International Coffee Exchange Center was unveiled in Pu’er city. According to Shu Yang, the general manager, the center aims to raise the proportion of fine coffee by 20 percent in the next five years, and increase its production value from 15,000 to 30,000 yuan per mu (1 mu equals to 0.67 hectare). The global reputation of Yunnan coffee thus is expected to be further enhanced in the near future.

In recent years, a number of local coffee enterprises have gradually come into the sight of consumers, along with the burgeoning coffee industry of Yunnan. Take Hogood, China’s first domestic coffee brand, for example, it invents a method to graft coffee plants with walnut trees. The quality of both coffee beans and walnuts has been significantly improved by this means. Another renowned coffee producer Aini, on the other hand, develops the first “green” coffee that can be planted in Yunnan’s jungles and rain forests. The company believes that coffee could contribute to the protection of agroforestry system and maintenance of biodiversity.

Last October, a coffee price index was jointly published by the China Economic Information Service, Municipal Government of Pu’er as well as Yunnan International Coffee Exchange Center. Samples were collected from the five major coffee growing areas of Yunnan, encompassing Pu’er, Dehong, Baoshan, Lincang and Xishuangbanna. The index can precisely predict the trend of coffee price change in both short and long terms – which is pivotal to the industrial upgrade and healthy development of Yunnan’s coffee business.

Since 2018 when Yunnan initiated a project to promote green food, considerable vitality has been injected into its coffee production. A systematic industrial chain incorporating cultivation, collection, processing and marketing has been established by steps. Now, local governments, coffee-growing households as well as private enterprises are making joint efforts to turn coffee into a leading green food of Yunnan.