Mupamipa -Creation Myths(牡帕密帕) is a long epic of creation, was spread in Langcang Lahu Autonomous County of Simao City. Mupamipa -Creation Myths was formed in the long ancient society of the Lahu Ethnic Minority . During the long-term hunting, gathering and migration, the Lahu nationality created the belief of animism, and myths and legends including the birth of Esha, the creation of heaven and earth, the creation of sun and moon, the origin of species, and the origin of race emerged. 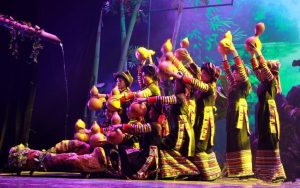 The Story of The Myths

Lahu people’s “broad and broad” is a folk singing form of narrating ancient times. It is mainly sung by the singer “Gamuke”(波阔嘎阔), accompanied by Chorus and rotation, usually during traditional festivals or religious ceremonies. The melody is simple, there is only one mode, the melody is popular and fluent, the lyrics are fixed, the duality sentences are predominant and easy to be spoken and sung. The singing activity of Mupamipa -Creation Myths is rooted in the folk. The singing method is simple. People surround the fire pond, drink and listen to songs, and stay up all night. 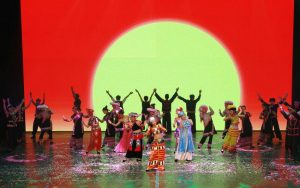 Now, with more than 2,300 lines of poetry, it takes about three days and three nights to finish. The repertoire is rich in mythology and imagination, which can be called the Encyclopedia of Lahu nationality’s history and culture. However, due to the impact of modern culture, there are fewer singing activities and few successors. There are only 2 to 3 artists in Datangzi Village(大塘子村), Zhutang Township, Lancang County(澜沧县), and Banshan Village(半山村), Fubang Township(富邦乡), who can complete the performance of Mupa Mipa is the oldest one  nearly 80 years old. At present, after collecting and sorting out, has published “Mupa Mipa”, “Mupa Mipa Guge Canaceae”, “Mupa Mipa” and other books, “Mupa Mipa” all the arias have been included in “Lahu Folk Literature Integration”.