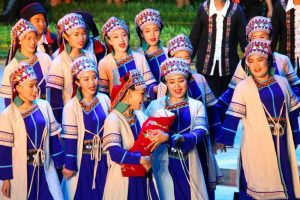 Four Seasons Production Ditties of Hani Ethnic Minority(哈尼族四季生产调)  spread in Honghe Hani Yi Autonomous Prefecture(红河彝族自治州),  Yuanyang County(元阳县),  Lvchun County(绿春县), Jinping County(金平县) and other counties. There are no words in the history of Hani nationality, but a large number of rich skills and experiences which are accumulated by its ancestors about nature, animals and plants, production and life form a set of complete knowledge system of agricultural production, life and folk culture. After summing up and refining, the traditional culture of farming production and life of Hani nationality has been continued from generation to generation with the popular ballad Four Seasons Production Ditties of Hani Ethnic Minority .

Although there are different versions of Four Seasons Production Ditties of Hani Ethnic Minority , the main contents are the same. At present, about 1670 lines of ballads have been collected in Honghe Prefecture, which are divided into five parts: an actor undefined opening words, three months of winter , three months of Spring , three months of Summer and three months of Autumn. It completely reproduces the labor production procedure and living custom picture of Hani nationality, imparts the systematic Hani terraces farming technology and unique living custom, and is a complete Hani production and life textbook.

The introduction part has 41 lines, which emphasizes the importance of inheriting ancient songs and imparting traditional knowledge in wonderful and vivid language, while the rest describes or introduces the procedures of terraces farming in seasonal order, including bubble fields（泡田）, ridges（打埂）, breeding（育种), seeding（撒秧）, transplanting（插秧）, seedling extraction（拔秧）, seedling planting（栽秧）, seedling collection（薅秧）, millet（打谷子）, back millet（背谷子）, warehousing（入仓）, etc. It also includes astronomical calendars and natural phenological changes corresponding to farming activities, depicting the three prayer and harvest festivals of the Hani people such as the Zhai God（寨神）, the sixth lunar month, and the tenth lunar month in easy-to-understand language , and the education of life etiquette for young people. 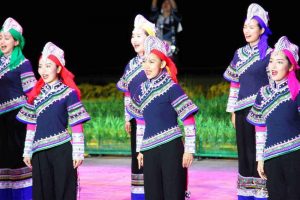