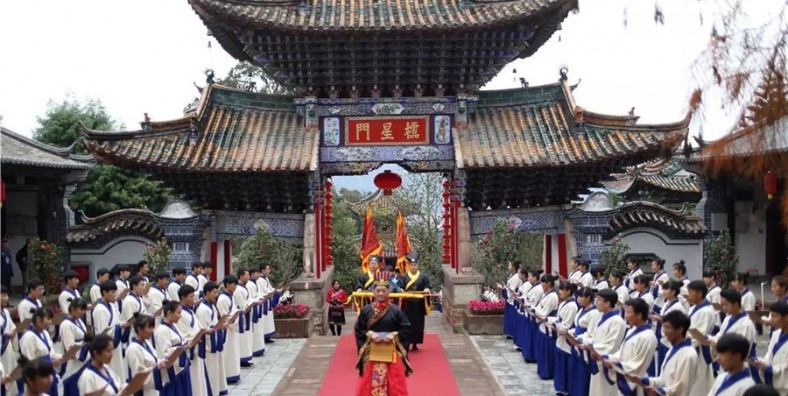 Where is the Confucian Temple in Jingdong County

Located in the west of Jinping Town of Jingdong County and covering 5,292 square meters, the Confucian Temple stands in front of the Yuping Mountain. The general layout is on a symmetric basis. The Temple stands at the foot of Yuping Hill to ther west of Jingdong county seat, and the temple was constructed in the 21st year (1682) of the Kangxi Reign of the Qing Dynasty and is one of the province-level protected historic relics in Yunnan. With a complex of majestic, quaint and elegant architectures, the temple is one of the best preserved of its kind in the southwest of Yunnan Province.

With its façade facing the east, the temple lies beside waters and mountains. It faces the Ailao Mt in the front and backs on the Wuliang Mt. Stepping into the temple, visitors will be impressed by towering ancient trees and pavilions decorated with glazed tiles and flying eaves.

What to see in Confucian temple?

Woods in the Confucian temple are serene and majestic, just like those in the hometown of Mr. Confucius. The architectures in the temple include Panchi Pool (Panchi, a pool in front of a school in ancient China, thus Panchi refers to school of Confucianism in ancient times), Bell Tower, Lingxing Gate, Dacheng Gate and Dacheng Hall, all artistic, exquisite and classic. 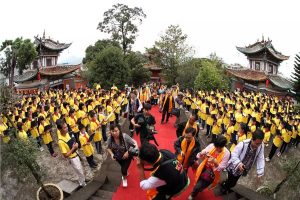 There are in all five courtyards in the temple. The Chuanhe River in its front, Fenghuang Mt in the east, Lingxing Gate, the Jar at the roof of Dacheng Hall, and the peak of Yuping Mt are miraculously at the longitudinal axis, creating majestic views and featuring the traditional Chinese imperial architectural style. The temple is a good example integrating Chinese traditional culture and classic architectural art.

There are half-pools, Lingxing Gate(棂星门), Dacheng Hall, and some living rooms in the Temple. One of the half pool is a crescent moon made of stone, which is beautiful and generous. It has a profound cultural heritage. It is said that in the ancient Chinese Spring and Autumn Period, the school of Lu State was called the Pan Palace, and the moon-shaped pool in front of the palace was called Panchi. Confucius was the Lu people. He had taught in Lu, so in order to commemorate this greater, later, when they built the Temple, and they had built a pot. At that time, students entered the school and also called the pool. There are 45 stone pillars and 41 slate stones around the Panchi Lake. There are 6 stone pillars and 5 stone slabs on both sides of the stone arch bridge. When entering the temple, it is necessary to pass the bridge, which means that the stone bridge will pass. Throw away all selfish dissatisfaction, sincere worship, in order to climb the peak, the gold will shine.

The Lingxing Gate is also known as Tian Xing. Whenever worshipping the heavens, first worship the Lingxing Gate and pray for heaven to bless, in order to achieve the goal of harvesting the grain, prospering the six animals, and doing things with ease. Therefore, before respecting the Confucius must respect the heavens, and respect the heaven is to respect the Confucius. It can be seen that the ancient ancestors’ respect for Confucius remained the same in ethnic minority areas in the border areas. The Lingxing Gate is a relatively complex building in the Temple of Confucian. It has the characteristics of oriental architecture. It is a beam-lifting building. It is made up of stalwart boulder. There are various animal which reliefs around it. There are gorgeous arches under the eaves. The whole building is magnificent and magnificent. 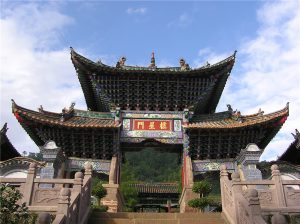 Dacheng Hall is the largest building in the Temple of Confucian. It is solemn, and it is exquisite in workmanship. It is 20 meters long and 15 meters wide. There are 28 large cylindrical columns on the drum pier. The temple door is carved wood and carving craft, and nearly 100 kinds of animal flowers are vivid, such as “San Yang Kai Tai”(May you life be auspicious!), “Zhu Bao Ping An”(a family letter reports peace), “Wu Long Bao Shen”, ” Xi Que Nao Mei”(Magpiestake you good luck).”Dacheng” praises the greatness of Confucius. He combines the sages and cultures. “Dacheng is the Holy Master.” He has been highly appraised in history.

The statue of Confucius in the center of Dacheng Hall is made of white marble sculpture, giving a sense of dignity and elegance. Confucius occupies a very important position in the field of creating Confucianism. The emperors of all ages had the “inscription” of praise and respect. For example, the three gold plaques are all from the “Shen Xie Shi Zhong” by Daoguang in the Qing Dynasty, the “De Ji Chou Zai” of Xianfeng, and the “Si Wen Zai Ci” of Guangxu, all of which illustrate the Emperors respect Confucius and Confucianism in the Qing Dynasty.

Why must the temple built at the hill foot but not on the flat area?

The answer is that one must climb the steps upwards to eventually get to the Dacheng Hall (the Hall of Achievement), which implies the philosophy that students must try hard in order to finally reach great achievements.

Jingdong Confucian Temple is located in the center of Jingdong Old Town. It is adjacent to Jingdong No. 1 Middle School, the highest institution in Jingdong. It is the largest Confucius Temple in southwestern Guizhou. It is also called the School of Learning. It was built in the 21st year of Qing Emperor Kangxi (AD 1682) ), with a total area of ​​5292 square meters, has been repeatedly burned by war and rebuilt several times. The most recent one was rebuilt by the state in 1984. The entire building is a multi-level courtyard building complex. The Temple is backed by the Wuliang Mountain, facing the waters of the Luanchuan River, and the five pilgrimages of the dragons. The natural landscape is very beautiful. Under the backdrop of Gumei, Cangsong and Cypress, it is more poetic and artistic.

How to Get to Jingdong Comfucian Temple

There is the Passenger Station in Jingdong County for people to get in.

Take the taxi or rent a car to go to the Jingdong Comfucian Temple.

Where to Stay in Jingdong County

Jingdong County is a county under the jurisdiction of Pu’er City, Yunnan Province, China. There are many hotels around Jingdong County. Yunnan Exploration will provide the best hotels for you. The recommended hotels as follows: 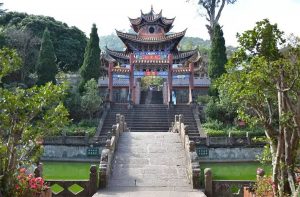 It is suitable to visit Jingdong County all year round. Like many other cities in Yunnan, Jingdong is a place where the seasons are like spring. There is no cold, no heat, warm and humid, especially suitable for human habitation, so you can go to Jingdong at any time.

When you traveling Pu’er, Jingdong County is a good place to be put on your list. It can be joined in whatever your Pu’er tour or Yunnan Tour.