Yogurt (/ˈjoʊɡərt/ or /ˈjɒɡərt/; from Turkish: yoğurt), also spelled yoghurt, yogourt or yoghourt, is a food produced by bacterial fermentation of milk.[1] The bacteria used to make yogurt are known as yogurt cultures. The fermentation of lactoseby these bacteria produces lactic acid, which acts on milk protein to give yogurt its texture and characteristic tart flavor. Cow’s milk is commonly available worldwide and, as such, is the milk most commonly used to make yogurt. Milk from water buffalo, goats, ewes, mares, camels, and yaks is also used to produce yogurt where available locally. The milk used may be homogenized or not, even pasteurized or raw. Each type of milk produces substantially different results. 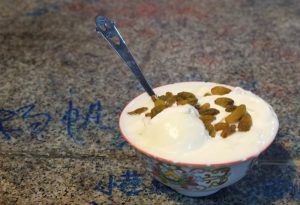 Tibetan Yogurt(藏式牦牛酸奶) is a little different from other yogurt, because it is made from yak milk instead of cow milk.

For thousands years, our nomadic ancestors have been  making and eating yogurt from milk from their herds of Yak and Dri (female yak). The appropriate way to say  “eat yogurt” … in Tibetan is … “sho daa” – meaning “lick yogurt.”  Yes – this conjures up the image of a young Tibetan drokpa child licking clean a bowl of delicious, tasty “sho” that his mother might have made.  There is nothing better than home-made “sho” – trust me and try it for yourself.

Making yogurt is actually very easy but it does take quite a bit of patience which sometimes I lack.  Basically, you heat up milk, cool it down, add the yogurt culture, and then let sit for a few hours.