The Yangzong Lake was opened to fishing again after an 11-year closed fishing season as the Yangzong Lake scenic area celebrated the second farmer’s harvest festival and the first fishing festival on Oct.15.

During the festival, locals harvested a lot by fishing. A villager called Hu Litao caught a 30-kilogram fish which was the largest fished on that day and dubbed “King Fish”. It was sold at the price of 4,500 RMB (approximately 634 US dollars) in an on-site auction. Hu said that as the water quality of Yangzong Lake has been improved, more tourists will come. Therefore, his family will embrace a promising future.

Meanwhile, various activities were held to celebrate the festival, including ethnic dances, instrument performance and square dances. In addition, agricultural products were displayed.

Located in central Yunnan, the Yangzong Lake is one of the nine plateau lakes in the province. This year’s fishing festival also highlighted the significant effects achieved in improving the water quality of the lake. 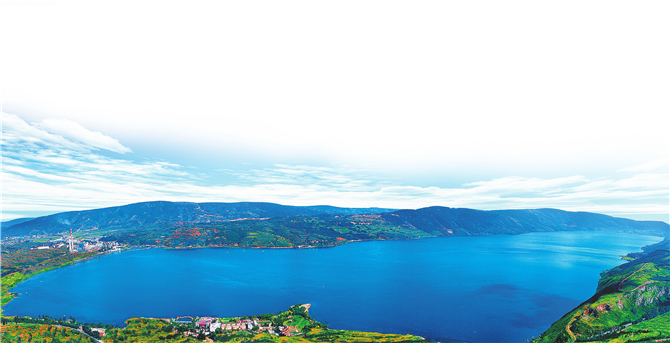 In 2008, the lake was polluted by arsenic. In September of that year, Yunnan issued “three prohibitions”, namely, no drinking water from, no swimming and no fishing in Yangzong Lake. Since then, a series of measures have been taken to protect the eco system of the lake. Up to now, a total of 1.6 billion RMB (approximately 224 million US dollars) has been invested to protect the lake. Facilities like sewage interception and wetland protection and others were built. Since June, 2016, water quality of the lake has kept at Grade III for 40 months in a row.

Retrace the old Tea-Horse Road in Nakeli
Ginkgo Village: A story of nature and wealth
Cherry blossoms blooming in Yunnan
Azaleas blossoms enliven Shangri-La in May