Yunnanyi Ancient Town(云南驿)was Yunnan County in the Han Dynasty and Yunnan Prefecture in Weijin. It was named after the Yunnanyi of Yunnan, Ming and Qing dynasties. This is the administrative village of Yunnan. Yunnanyi has been a major town of the Ancient Tea and Horse Road and Shuyuan Road (蜀身毒道) on the South Silk Road. With a history of more than 2,100 years, Yunnan was an ancient station. The caravans rested here and gathered goods here, and it was prosperous and crowded. From Sichuan through Yunnan to Myanmar, India to West Asia, there is a trade route, which is the famous ancient Southern Silk Road. Through this ancient road, Chinese silk, tea, and porcelain are exported to Myanmar, India, the Roman Empire, and the Arab countries. The agate, ivory and jewellery in the above areas were trafficked to China. On this southern Silk Road, Yunnan is a important hub.

Why is Yunnanyi Ancient Town so special?

Where is Yunnanyi Ancient Town?

Yunnanyi is an ancient town of Xiangyun County（祥云县）in the west-central part of Yunnan Province. It was the necessary pass of the South Silk Road in the ancient time.

How to get to Yunnanyi Ancient Town?

If you are looking for Yunnanyi on a map of China, it may not be easy to find. Geographically, Yunnanyi is an ancient town of Xiangyun County（祥云县）in the west-central part of Yunnan province(云南省). Yunnan province is interspersed with plateau and mountains. Having an area of 218.76 square kilometers, Yunnanyi has 108 natural villages with 17committees in the villages and 204 villager groups. With the highest altitude of 2658 meters and lowest altitude of 1758 meters, it belongs to temperate climate. The annual average temperature is 15.2℃and the annual rainfall is 705.6mm. 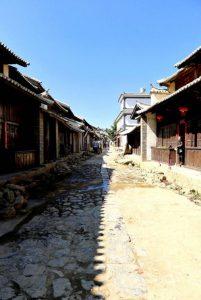 In AD221-263(the Kingdom of Shu Han), Yunnanjun—which functioned as the administrative region- was in Yunnanyi.

In Tang Dynasty (In AD618-907), Yunnanyi was regarded as the key military frontier between Nanzhao Kingdom and Tang Dynasty and had the first Jiedushi—the commissioner of Nanzhao Kingdom.
In Song Dynasty (in AD960-1279), Yunnanyi was called Yunnandan（云南赕）, which means the minority nationality in the south of China. The law—called Shishu- was carried out here. Shishu was a kind of law which had the criminals exonerated with money. 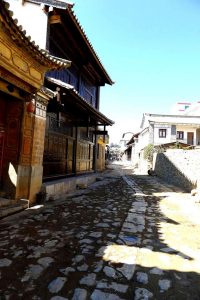 In Yuan Dynasty (In1271-1368), Zhongshusheng—the executive branch of the government- was established. Thus, Yunnanzhou and Mazhan—a posthouse- had 50 post-horses that were set up in Yunnanyi.
In Ming Dynasty (in1368-1644), the present-day Xiangyun County became the center of the administrative region, which represented the end of the proud history of Yunnanyi as the administrative region for 1500 years. Yunanyi thereby remained as the posthouse and kept its name until today.

In Qing Dynasty (in1644 -1912), Yunnanyi was the distributing center of the Old Tea-Horse Caravan Road and received a lot of caravan groups. Lin Zexu—a government official-lived here in order to deal with the official affair.
In the modern times(especially in the period of World War Ⅱ), Yunnanyi functioned as the military center and the well-known Burma Road went through here. It was also considered as the vital air transfer settion of The Hump Route. At that time, the Kuomingtang Air Force had a station and an academy in Yunnanyi. Since some foreign volunteer groups gathered here, the restaurants like New York restaurant and Huamei restaurant, were built for people.

Yunnanyi is the birthplace of the millennium caravan culture in western Yunnan and the earliest county. The ancient paths saw the Yunnanyi’s history and prosperity. Caravan groups left their trail on the paths; the horse bells played pieces of melodious music; the culture was spread. Posthouses were constructed for the Silk Road in the southwest of ancient China; military airports were built for the War of resistance and more. Now, this town, full of a sense of history, has new vigor and vitality. 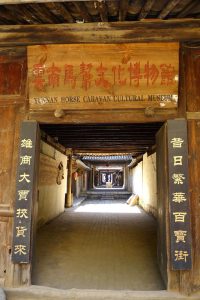 Given the history, caravan transport played a significant role in Yunnan province. In 1980s, the caravan transport was still the major transportation in Yunnan province. Since it preserved the complete post roads, the ancient Chinese posthouse and the inn with the stable left the history of the Yunnan caravan culture and some relative materials to the people, Yunanyi has gained greater attention from the various circles of society and the world.
This museum is the first museum of caravan culture in China, as well as the most preserved inn in size and integrity with the stable. Facing the site of posthouse and China-India-Myanmar memorial hall of transportation in the World War Ⅱ, this museum is situated in the core area of Yunnanyi’s historically cultural district. Covering an area of 724square meters, this museum has the double-roofed quadrangles with the civil structure in Qing Dynasty. It has the open display for tourists, and some remains, such as the stable, the accountant’s office and the shrine, which are renovated to be displayed in the museum. In this way, tourists can have the vivid and better understanding of the caravan culture.

There had been two airports—Yunnanyi airport and Beitun airport near Kunwan Road,also called Stilwell Road-in Xiachuanba of Yunnanyi town in Xiangyun County. In the Anti-Fascist War of the last century, the two airports had great performance and had been passed into history. For 50 years, three different Air Force Units were stationed here. In September, 1929, the Kuomintang governors in Yunnan raised funds to construct the Yunnanyi military airfield. For one year, the military was established and took an area about 173,200 square meters. During the period of 16 years, the government extended the airport for three times and over 800 workers died for the protection of the airport in the Anti-Fascist War. In the War of Resistance against Japan, this airport earned its everlasting merit and witnessed the perfect cooperation between the Chinese people and the American Volunteer Group. Although it had fallen into disuse, the parking apron, the airstrip, and the buried airplane are still available for tourists. Some other sites-like the Mass Grave and the First Lieutenant—Mr. Moni monument, deserved to be visited.

Around the 320 national highway, numerous eateries, restaurants, small and inexpensive hotels are provided for accommodation.

March is the best month to visit Yunnanyi, with the temperature climate and booming camellia. If you visit in Summer, you need to take the sunscreen and umbrella.

1.Best Time to Visit
Travleres can enjoy the tempreture climate of Xiangyun and appreciate the camellia in March.

2.What to Pack
Dali belongs to the low altitude plateau monsoon climate and ultraviolet ray is strong. Travelers should bring usual clothes and necessities as well as sunscreen cream and sunglasses to protect yourselves.

3.Tickets
The ticket price: 40-150 Yuan for each person (for your reference only)

One thought on “Yunnanyi Old Town in Xiangyun County, Dali”