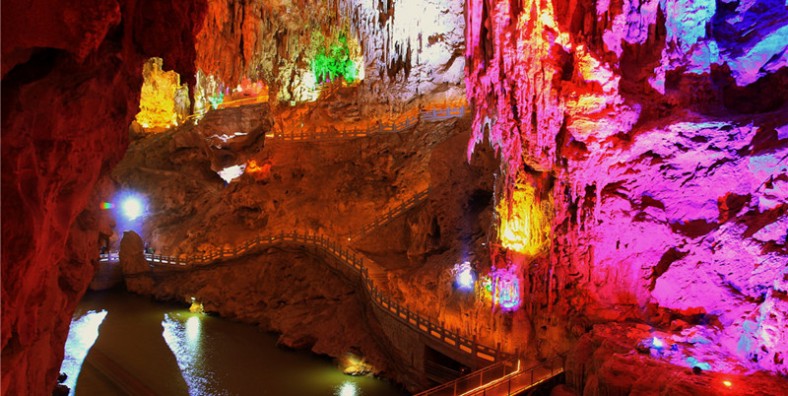 Known as one of "the biggest and most splendid caves in Asia" (it's more than 4,000 meters long), the Swallow Cave Scenic Region with a total area of 100,000 square meters is located in the mountains 30 km east of Jianshui, and consists of a dry cave, a water cave and a 30,000-square-meter natural forest. Every year between spring and summer, thousands of swallows will fly here from Malaysia, building nests and giving birth to and raising young swallows.

Ticket price:55rmb for an adult and 28rmb for a child.

The provincial-level Yanzi Cave Scenic Area is like a splendid and important scenic area of the national-level historic and cultural city Jianshui. Located at 103.3°E and 23.38°N, its altitude is between 1,220 and 1,270 meters. It is 30 kilometers to the west of the seat of the Jianshui County and between 50 and 60 kilometers far from Gejiu, Kaiyuan and Mengzi. The Jijie-Shiping Highway and Mengzi-Baoxiu Railway pass through the area, making the traffic very convenient. The Yanzi Cave started development in 1986 and opened to tourists in 1987. Then, tourists started pouring in the cave. The cave is the most magnificent and spacious cave of the world.

Why is Jianshui Swallow Cave So Special

Known as one of ” the biggest and most splendid cave in Asia,” the Swallow Cave Scenic Region is located in the mountains 30 km east of Jianshui, and consists of a dry cave, a water cave and a 30,000-square-meter natural forest, with a total area of 100,000 square meters. Every year between spring and summer, thousands of swallows will fly here from Malaysia, building nests and giving birth to and raising young swallows. Thus it is named “the Swallow Cave”. The local environment is a perfect dwelling for swallows because steep cliffs make it impossible for mice and snakes to come up, and bushes and grassland outside the cave help produce insects that provide abundant food for swifts. The special ecosystem makes a grand scene-“the gathering of thousands of swallows”.

Where is Jianshui Swallow Cave Location

From Kunming, Jianshui is 220 km south, about 3 hours by car. To the east lies Jijie, to the west Shiping, to the southeast Gejiu and Yuanyang, to the north Tonghai.

The park outside the cave has more than 30,000 mu of thriving natural forest. The main varieties of trees include the camphor, rough-leaf tree, holly tree and “scent tree.” This is the “scent tree” which could be used to expelling mosquitoes.

The Dry Cave is a religious-cultural area. It started development in the end of the Ming Dynasty and the beginning of the Qing Dynasty, about 300 years from now. Its development reached a peak when Duan Zhigang was the chief of the Taoist Group. The cave contains about 100 stone tablets of various historical periods. Various statues of Confucianism, Buddhism and Taoism are also displayed in the cave.

How to Get There from Kunming

If you take the bus it is 11rmb one way while a private taxi is $130rmb one way.