Both geoparks are typical examples of limestone landform with magnificent natural scenery. The agreement was reached when a Vietnamese delegation visited the Stone Forest which is located in central Yunnan’s Shilin Yi Autonomous County. The two sides agreed to maintain further exchange and cooperation in the fields of environmental protection, marketing, info sharing and branding.

Covering an area of 350 square kilometers, the Stone Forest Scenic Area boasts the most diverse and typical karst landscapes in the world and was put onto the list of World Geoparks in 2004. 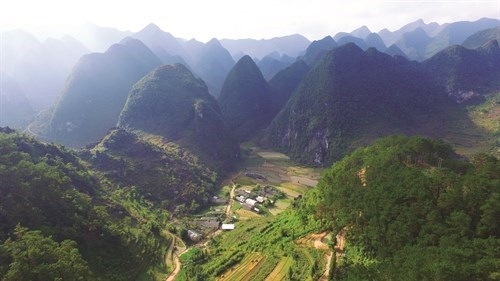 Dong Van Karst Plateau Geopark lies in north Vietnam and borders SE Yunnan’s Wenshan Zhuang and Miao Autonomous Prefecture. With an area of 2,356 square kilometers, it was inscribed onto the list of World Geoparks in 2010. In the park, 400 to 600 million-year-old paleontological fossils were well preserved.