The Graveyard of the National Heroes in Tengchong County, Baoshan 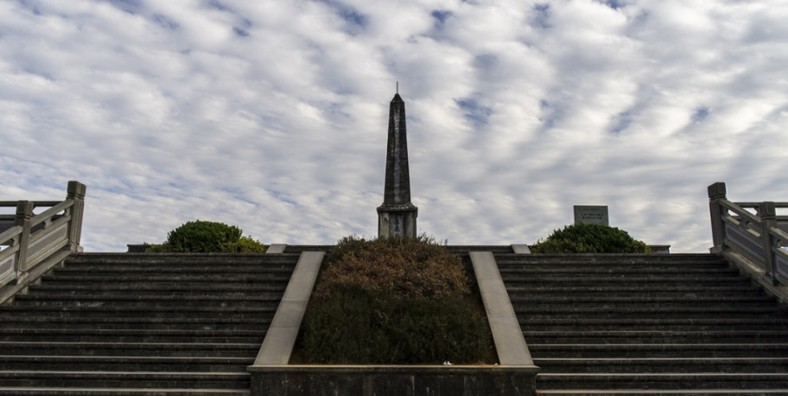 Graveyard of the National Heroes

The Graveyard of the National Heroes (国殇墓园) constructed to honour the martyrs at the battle of recovering Tengchong lies in the west of the county seat at about 1 kilometre’s distance. The construction was started in 1944 and completed on the 7th of July, 1945. It was Li Genyuan who called for the construction of the memorial graveyard. Covering over 10,000 square meters, the main structures are the memorial tower, the martyrs’ tombs, the memorial hall and the gate.

Why is Graveyard of the National Heroes so special?

The Graveyard of the National Heroes is the oldest and largest National Army Anti-Japanese Martyrs Cemetery established in the country. In 1996, it was listed by the State Council as a “National Key Cultural Relics Protection Unit”. On December 2, 2017, it was selected as the second batch of“Chinese architectural heritage of 20th century”.

Where is Graveyard of National Heroes?

It lies in the west of the county seat at about 1 kilometer’s distance.

How to get to Graveyard of National Heroes? 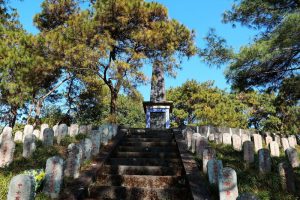 The pine and cypress trees densely planted on the mountain slope add to the solemn tranquility of the site. At the completion of the cemetery, Chiang Kai-shek penned an inscription meaning “The just cause for which they shed their blood lasts forever and ever.” Yu Youren wrote the title of the cemetery. Li Genynan praised the martyrs as “National Heroes.” Other high-ranking military officers of the Kuomin tang, such as He Yingqin, Wei Lihang, Huo Kwizhang, Zhou Fucheng, Qiu Hanqian and Gu Baoyu, all wrote inscriptions for the martyrs. The cemetery is placed under the province’s protection.

Though far away from the central China, Tengchong and Longling counties in the west of Yunnan province have been gloriously remembered into the Chinese history, especially for the WW II. In May 1942, the border of West Yunnan was coveted by the Japanese invaders who had already occupied Burma on the other side of the Nujiang River. When most China’s territories on the west bank of the river were lost into the Japanese hands, the Yunnan-Burma Road, which was then the only international passage in the Great Rear Area of China, was thoroughly cut off. In May 1944, the China Expeditionary Army (CEA) launched the counterattack in order to recapture the lost lands, and most importantly to ensure that international military supplies can reach China via the Yunnan-Burma Road. After 43-day fierce battle, came the victory–but with great toll. Six divisions of Chinese military (including the CEA) managed to cross over the Nujiang River and fought bloody battles with the Japanese soldiers. 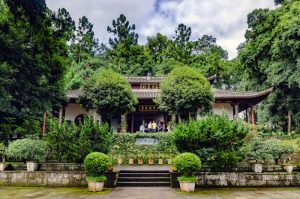 With the aid of the Alliance, Tengchong was eventually retrieved. However, the cost was big: the toll of Chinese soldiers/officers hit 9,168 and the Alliance 19. The grave yard Sitting at the foot of Laifeng Mt, Tengchong County, the Martyrs’ Grave Yard was first constructed in January 1945 to enshrine those sacrificed in the WW II. It covers about 53,000 sq meters, and includes such sights as the Loyalty Shrine, the martyrs’ graves, the Monument and the Museum.

Li Genyuan(李根源), from Tengchong, was a famous general of the Yunnan Army and a member of the Government. In the year of 1923, he was appointed to the post of premier and minister of agriculture and commerce. During the War of Resistance, he was  Ombudsman of Yunnan and Guizhou. After western Yunnan was invaded by the Japanese in 1942, Li insisted on blocking the enemies on the west of Nujiang River and volunteered to fight enemies in spite of his old age. His famous “A Letter to The People of Western Yunnan” enormously boosted the fighting will of Chinese soldiers and civilians.

The Cemetery consists of three parts: the Memorial Square, the Monument, and the Hero Tomb. 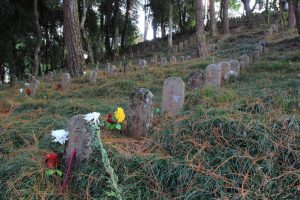 According to the information of the official website of the cemetery in August 2017, there are 2 exhibition halls with an exhibition area of 650 square meters and 141 pieces of anti-war objects. The exhibition adopts the concept of modern museums, sound, light and electricity. The contents of the exhibition are divided into five parts to memorial the heroes and the war.

The most impressive part of the cemetery is the small tombstones around the monument. The tombs of the martyrs are built around the tower radially. The tower is the center of the garden. There are eight fan-shaped cemeteries. From top to bottom, the tombstones are neatly arranged according to the sequence of the original combat troops and the title. The monument is engraved with the rank and name of the martyrs.

▪ The Hot Sea and Hot Field

Tengchong enjoys the favorable climate, so it is recommended to travel in Tengchong all seasons.

The Graveyard of National Heroes opens from Tuesday to Sunday. It was closed on Monday.

3 thoughts on “The Graveyard of the National Heroes in Tengchong County, Baoshan”