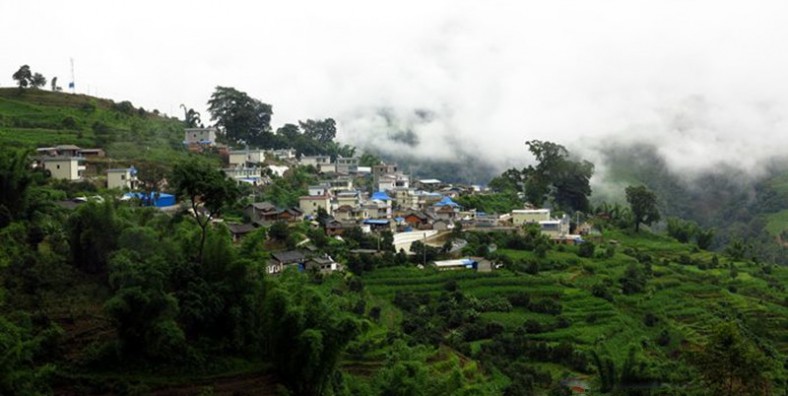 There is an altitude of 1640 meters village called Bingdao of Mengku Town（勐库镇） in Lahu-Va-Blang-Dai Autonomous County of Shuangjiang（双江拉祜族佤族布朗族傣族自治县）, Lincang（临沧）. With spring and picturesque all the year round, Bingdao Village（冰岛村） is famous for its fragrant ancient tea, which is the earliest place to grow tea in the county. There are five natural villages under the Bingdao Village, they are Bingdao Old Village（冰岛老寨）, Nanpo Village（南迫寨）, Dijie Village（地界寨）, Bawai Village（坝歪寨） and Nuowu Village（糯伍寨）. Bingdao Village is small and located at a high position in the mountains, and the residents’ main income comes from tea. There are two primary tea factories in the village, which used to mainly process black tea. Most of the tea trees in Bingdao Village are 700 or 800 years old, and the younger ones are 200 or 300 years old.  And the popular Bingdao Tea（冰岛茶）on the markets is from the Bingdao Old Village.

Bingdao Village is halfway up the hill, with houses facing south. Bingdao Village is free of snow and ice, like spring all the year round, full of green, abundant water and fertile land. It is a good place for people to live and tea culture travel.

One thought on “Bingdao Village in Shuangjiang County, Lincang”