People who take a tour to Dongchuan never forget to taste the local traditional cuisine of Dongchuan. As a town having various Chinese ethnic minorities, the local food is different from other places.

What to Eat in Dongchuan?

Noodles is the most common breakfast not only for local people, but also for people from all over the country.Dongchuan noodles is one of the best noodles in Yunnan,which can boil for a long time.It tastes sweet and smooth.The secret of Dongchuan noodles has good quality is depend on spring water in Guniu Mountain. It has been used as a good gift for friends and relatives. 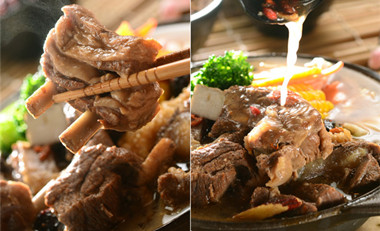 Dongchuan mutton tastes very delicious. The sheep were stocked in the high mountains and lofty hills of more than 3000 meters above sea level.They eat long grass and drink sweet draw.With Dongchuan's unique cooking techniques,there are lots of ways to eat such as stewed and braised.

Speaking of potatoes, commonly known as "Dongchuan potatoes" in the past. Because in the territory of Dongchuan, there has been found lots of gold mines, resulting in Dongchuan become a place to looking for gold rush, the world looking for gold industry barometer, which was Higashikawa Ooyo dipping, one not careful you may eat gold, therefore commonly known as the" golden potato ", the practice of a variety of, fried potato chips and burnt potato is to eat the most conventional.

Yaks hot spot is really delicious which was brought in from Tibet.It has unique features on shape,meat quality and taste.

It’s a precious and famous dish.The tartary buckwheat is a little bitter,so we sweeten them with honey.This dish is just as our life.

Where to Eat in Dongchuan?

There are many special restaurants in Dongchuan. We have listed some restaurants with good taste and beautiful environment for tourists.