Ginkgo Village: A story of nature and wealth 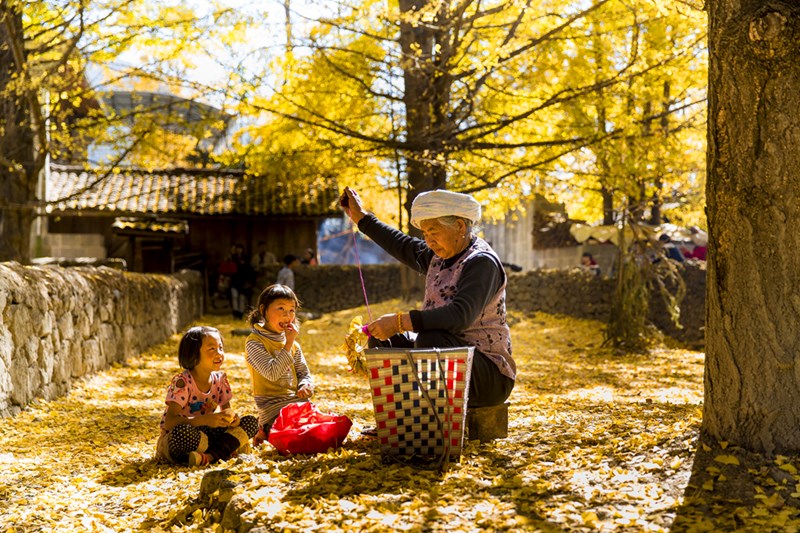 Early winter marks the period of a year to appreciate ginkgo trees. In Jiangdong, southwest Yunnan’s Tengchong city, a ginkgo forest covering acres of land has literally turned the place into a wonderland. Jiangdong was once an impoverished village in the past. But since the boom of agro-tourism – particularly sightseeing based on ginkgo leaves – significant elevation has been witnessed on the living standard of local dwellers.

Jiangdong is a small village located in the Gudong township of Tengchong. It has, for decades, been dubbed as the “Ginkgo Village” of Yunnan, due to a vast ginkgo forest it connects with which comprises a surprising number of over 30,000 trees. Each year between September and December, fan-shaped ginkgo leaves here would gradually turn from green to bright yellow, glistening in the sun. Meanwhile, the entire village would seem to be a fairy land immersed in golden oceans. 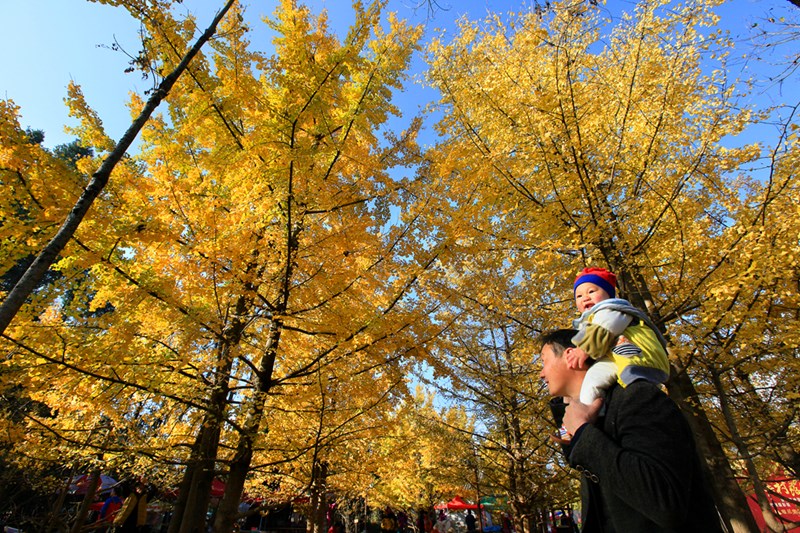 Walking towards Jiangdong, you are very likely to be absorbed by a colossal tree standing right before the village. Its stock looks so gigantic that several adults are needed while attempting to wrap it around by arms. Cheng Anzhong, the village’s Party secretary, told us that this tree is known the “King of Ginkgo” in Jiangdong, because of its stunning size – and more importantly, its age of over 1,300 years old.

Legend goes that ancestors of the residents here were soldiers being deployed to Tengchong from Sichuan during the Hongwu period (1368-1398) of the Ming Dynasty. They set up camps near the giant tree, and even planted more ginkgoes around. From then on, ginkgo trees have been treated by the villagers as a unique natural and cultural asset that needs to be guarded and passed down throughout generations. 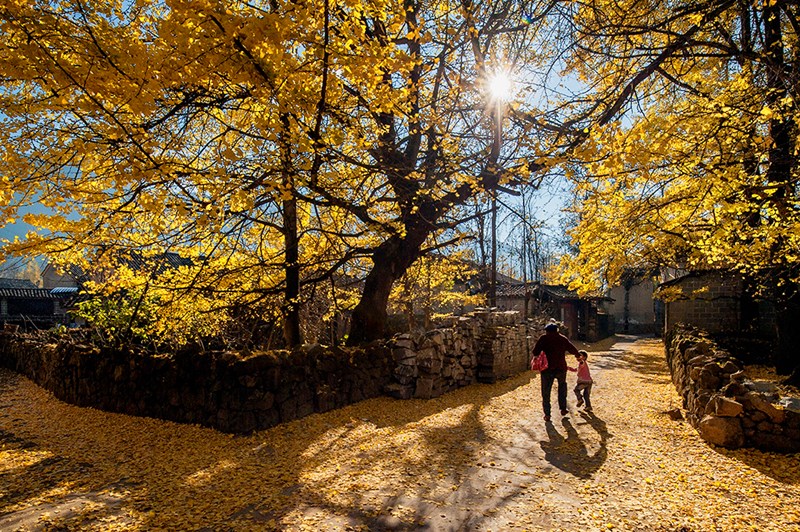 Today, it’s fair to say that ginkgo almost defines the nature of Jiangdong, and the two can no longer be set part. Having been widely grown around the village, ginkgo trees play not merely as a key tourist magnet, but an indispensable element of local life. One can always find old ladies stitching while chatting with each other under dense canopies. Meanwhile, the ginkgo forest is a decent place for strolling and enjoying family meals together. In order to better protect ginkgoes, villagers of Jiangdong have reached an agreement that no trees are allowed to be cut down for house building. Moreover, newlyweds would be asked to plant new ginkgo trees themselves, as an essential part of their ceremony.

From golden tree to gold tree

Despite of the large stretches of beautiful ginkgo forest around, Jiangdong – in a fairly long time – remained as one of the most underdeveloped regions in Donggu township as well as the entire Yunnan province, due to its isolation and lack of infrastructures. After several rounds of discussions, villagers and local government officials came to an agreement that agro-tourism  the key to help Jiangdong shake off poverty and improve the villagers’ livehood substantially.

In 2008, a villager named Yang Zhuying decided to start an agritainment business at her place. She turned her front yard into a parking lot and vacant spaces into guest rooms. The house was soon crammed with tourists from both Yunnan and other provinces as a result. “They very much like taking pictures with ginkgo trees and trying our home-made dishes,” Yang told us. Her own family, on the other hand, has also experienced dramatic changes. “In the past, my husband had to go to work in big cities, otherwise we would have no money to send our children to school. That was indeed a tough time,” said Yang. “Thanks to the tourists who come here for ginkgo leaves, we can now make more than 70,000 yuan each year. Such a big difference, isn’t it?” 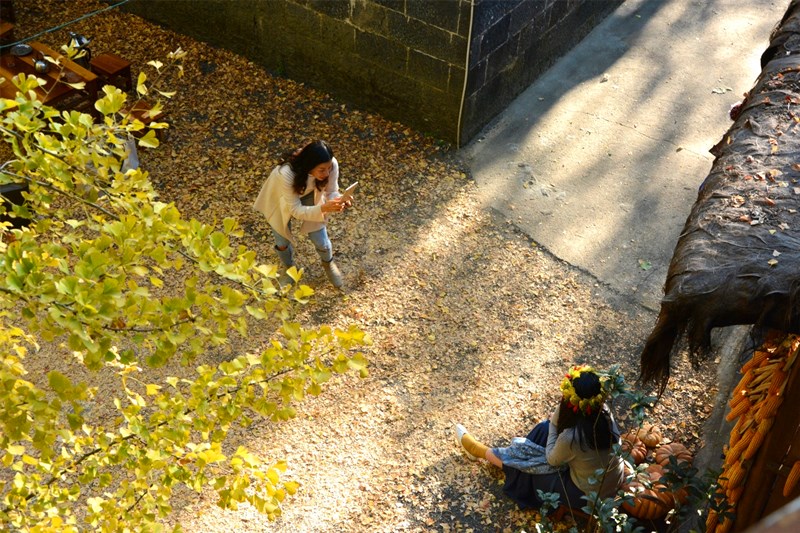 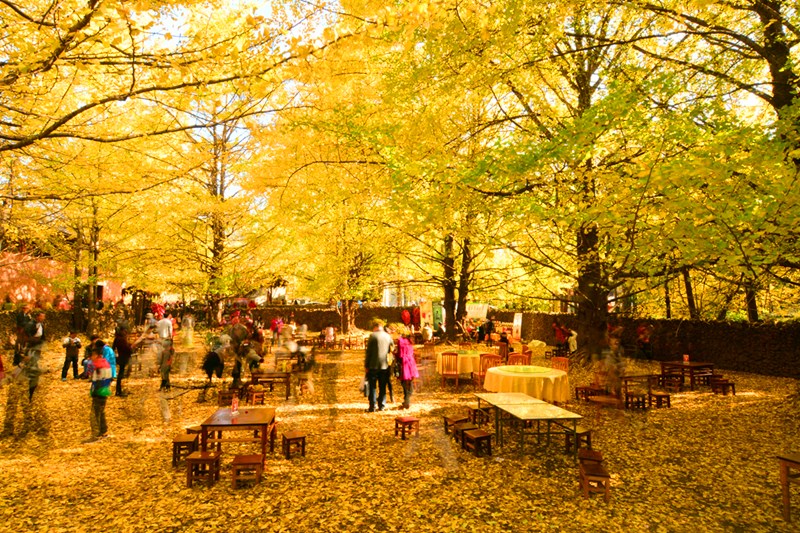 To villagers, aesthetics is never the only value that ginkgoes possess. Ginkgo nuts – which are considered something with medicinal properties – have been generously applied to local cuisines. Chicken soup with ginkgo nuts, for example, is a popular one among tourists. Huang Jinchao, a native chef and restaurant owner, has been deemed as a master in terms of cooking this partcular dish. Besides, he also sells a range of products made from ginkgo leaves or nuts, such as biscuit, tea and candy.

According to statistics, there are over 150 households in Jiangdong running ginkgo-related businesses today. As a new business model which connects villagers with several enterprises has been set up, more people are now ready to enjoy the bonus brought by ginkgoes.

Yisa: the fortress on horseback
Kunming Xunjin Street: A new favorite for tourists
The Jiaozi Snow Mountain in Summer
Nuohei: Life is a flowing melody