Pickles are popular all over China, but Yunnan pickles seem to be particularly common here. In Yunnan, pickles are everywhere. All the vegetables you can think of are pickled here: cabbage, mustard, radish root, bamboo shoot, onion, garlic, chive, chive, fern, mushroom, fresh pepper, lotus, black bean, etc. Even fruits such as strawberries and pineapples are made into pickles and sold as snacks by street vendors.

Although there are many kinds of pickle ingredients, the pickle methods are almost the same among these different ingredients, and in the whole province, vegetables (or legumes, roots or fruits) are massaged with salt, Chilean slices or Chilean sauce, sometimes Sichuan pepper, and then fermented in cans in 1-15 days to produce lactic acid. The sealed pickle jar makes it impossible for foreign bacteria to invade, but the lactobacillus in the jar can act calmly. The fermented carbon dioxide is “exhaled” out of the jar, and the jar completely becomes “the world of anaerobic probiotics”, forming the sour taste while maintaining the appearance of water.

Ways to Eat with Yunnan Pickles

If there’s one flavor that ties together Yunnan’s many different cuisines, it’s the sharp, sometimes briny, often spicy flavor of the region’s pickles. As an ingredient, these pickles are widely used because of their variety. From fried beef to rice noodles in casseroles (usually mustard green pickles in Kunming and Napa cabbage pickles in Dali), they can be added to all products. They are particularly good when mild ingredients such as fried white beans are added. A simple plate of fried potato chips has excellent fragrance by adding small pickled chive blossoms. This chiffon has lemon flavor, flower fragrance and almost soapy quality. Moreover, no matter where you use the pickles (or choose from which materials), the dish always has a unique Yunnan flavor and aroma.

The color of red radish is like Cherry Blossom. Wash and slice the fresh red radish, put salt and chili powder, and most importantly, add the “old water” that soaked the radish before. After more than ten days of soaking, a jar of refreshing cherry pickled radish will be made. Take a bite, the first thing you feel is the crispness in your ears, followed by the sweet and spicy feeling in the acid. The perfect combination of crisp taste, sufficient moisture and sour, spicy and sweet flavour.

In Yunnan, pickles made of fruit are the main dish of every pickle stall. This kind of pickled fruit is a novel variety which combines the general principle of “pickling” with the four seasons fruits of Yunnan Province. The traditional pickled fruit is pear. The common torch pear in Yunnan has red and thin skin, tender flesh and juicy, but so sour that people frown and make eyes. Take this pear it in a pottery jar with cold boiled water, sprinkle salt on it, and soak it for a month. Now, as long as it’s the fruit of the season, whether it’s strawberry, pineapple or mango, papaya, Yunnan people can make it for you. Finally, it’s sour and fruity with a layer of chili powder. It looks strange, but the taste is rich and sour.

Yunnan people have the habit of making pickles since ancient times. Lu Kuan(陆宽)’s family has been making pickles for generations and he is the third generation. As early as six years ago, Lu Kuan established his own traditional pickle brand: Paocai Tang.

Lu Kuan said: the current era is the era of young people. New things are that young people are most willing to accept. In the aspect of pickles, we have a deep foundation and solid technology. Why not make a pickle suitable for all ages? Therefore, his team choose to slow down, temper the technology, add Yunnan characteristic flowers to the original pickle technology, and make fresh pickles. After 247 days of research and development and hundreds of continuous debugging, he successfully eliminated the original smell of Cherry Radish, and made a fragrant and refreshing flower bud pill with the extract of rose, peach and Luo Shen Hua. The name of “Huabu Wan” comes from three elements of “flower, radish and sakura momoko”. 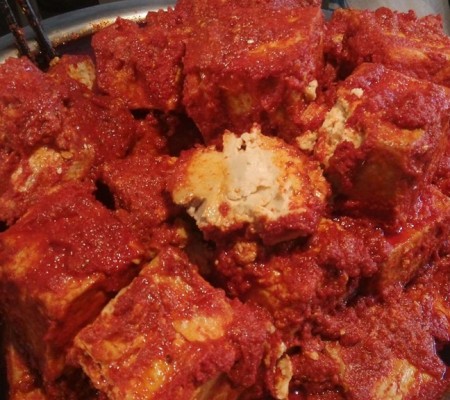 Lufu (Chinese: 卤腐; pinyin: lǔfǔ) is a type of fermented bean curd from Yunnan Province in Southwest China. It is colored reddish yellow, it has a soft texture, and it has a savory flavor. It is used as a condiment for kăo ĕrkuāi or made...