Luoping is a national base for raising bees and producing honey products. Early every spring, the blossoming Luoping rapeseed flowers draws flocks of tourists and photographers. Sprawling farmland covered in golden rape stretches right up to the horizon, forming a sea of yellow buds and filling the air with the refreshing smell of spring. In recent years, Luoping Rapeseed Flowers Tour has been popular and enjoyed good fame.

2.Where is Luoping County

The small town of Luoping lies in the relatively underdeveloped eastern part of the province, 228km east of Kunming, neighboring Guizhou and Guangxi. Luoping is dominated by karst features with small basins among mountain ranges.

In the Western Han Dynasty, there was a missing country, Yanglang country (now Luoping), Lijun County. It was a land of Nanning. At the beginning of the Tang Dynasty, it was the general official of Nanning Prefecture. During Tang Dynasty Tianbao period it was Luo Xiong and belonged to Nanzhao Kingdom Shicheng County. In Song Dynasty, it was one of the thirty-seven parts of the Eastern Cuan and Western Man, and was a member of the Shicheng County of Dali Kingdom. In the second year of the Republic of China (1913), it was called Luoping County, which belonged to the Dianzhongdao. In February 1959, Shizong County precipitated Luxi County, and Shizong and Luoping merged into Luoping County. In 1961, Shizong County was settled and Luoping County was restored.

7.What to Visit in Luoping County

Located in 20 kilometers northeast of the downtown of Luoping County, Nine Dragon Waterfall, also known as Jiulong Waterfall, is the most famous waterfall in Jiulong River.

There are approximately 40 waterfalls along the bed of Duoyi River which is about 12 kilometers long. The bamboo raft on the river, the bamboo groves, trees, houses and waterwheels on the both bandks of the  river present an idylic setting.

8.What to wear in Luoping County

From Jan. to April of the Luoping County, the weather was a bit cold, and the temperature in about 10-16 ℃. In the morning and night, the temperature is low. The temperature difference is large, and it is best to wear fleece jacket. In addition, it is better to wear brightly colored clothing, as this will make beautiful pictures in canola flower sea.

Budget hotels are centralized around the bus station of Luoping County, Zhenxing Street(振兴街) and Xinfeng Street(新风街). The price ranges from CNY 100 to 400 per person.

Train and Regular Bus is available from Kunming to Luoping. It cost about 3.5 hours by train and 4.5 hours by bus. From Luoping, there are buses to Qujing, Luliang, Shizong, Kaiyuan and Kunming. Travelers heading to Yuanyang from Luoping usually get transferred in Kaiyuan (South Bus Station). The latest daily bus back to Kunming is at 9 pm. 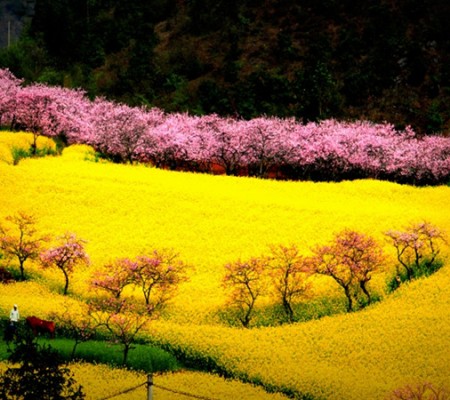 Culture of Luoping County in Qujing

Culture of Luoping County in Qujing... 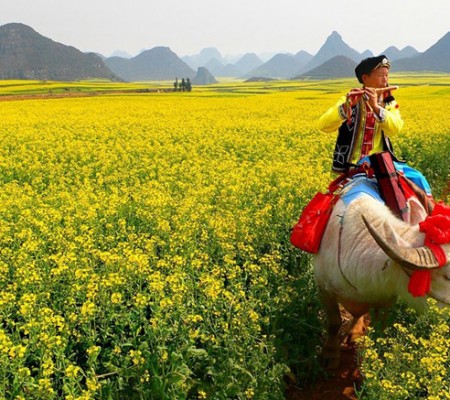 Luoping County is well-known for its rape flower scenery. In the county, rape flowers that cover 800,000 mu (53,333 hectares) are planted there. From February to April every year,...