Wuhua District's cuisine is varied and coveted. Whatever street snacks, barbecues, or elegant indoor restaurants all have local characteristics. We have listed some of delicacies and restaurants that must eat in Wuhua District.

Dian dishes are moderately salty and spicy. To do in Rome as the Romans do', try the food specialties in Kunming. The unique delicacies from Kunming are famous throughout China; especially the fresh wild mushrooms. There is an edible wild mushroom family of over 200 varieties in Kunming, the tastes of which remain in mind. Some recommended Dian dishes include the following:

Steaming-Pot Chicken (Qiguo Ji)
This dish gained its name from steaming the chicken in a pot with a hollow tube in the center. It is a simple tasty dish. To make it, place chicken, ginger, a shallot, pepper and salt in the pot and steam for about four hours, during which time steam from the tube contacts the cold pot cover turning to water, then flows back into the pot to become delicious chicken soup. Before serving, remove ginger and shallot.

Braised Jizong (mushroom) in Soy Sauce (Hongshao Jizong)
Kunming is host to various wild mushrooms including Jizong. Whenever the sun shines after a rain from June to September, many Jizong shaped like small grey umbrellas appear on the mountain. The chicken-like taste of Jizong is popular with gourmands. Braised Jizong in Soy Sauce is prepared this way: Wash Jizong; dry by airing; cut into pieces. Next chop chili and tenderloin pieces. Wrap tenderloin and Jizong pieces in egg white, starch and salt mixture; fry in hot oil. Finally, braise the Jizong and tenderloin pieces with garlic, ginger and shallot. Drizzle sesame oil on a plate, place braised pieces on oil.

Kunming Bittern Duck (Kunming Lu Ya)
The dish is a first choice among tourists. After choosing ducks from Dianchi Lake and preparing with some ten steps, it can be served. The dish is golden with a soft flavor. It is said that Bittern Duck is a dish do much good to people's health.

Across Bridge Rice Noodle (Yunnan Guoqiao Mixian) is one of the featured specialties of Kunming and Yunnan. It has three main parts: a bowl of extremely hot chicken broth, various slices of meat, including chicken, fish, and meat up to nine varieties, with various seasonings and rice noodles.

Modern Cake (Modeng Baba)
Baba is popular in Yunnan. It is a food made of flour, corn powder, sticky rice, lard, sesame and meat. The initiators of Modern Baba were two pretty sisters who made sweet and tasteful Baba that attracts people even today. Modern Baba has a crisp exterior and a soft interior; it is sweet with savory cream.

There are many special restaurant in Wuhua District. We have listed some restaurants with good taste and beautiful environment for tourists.

Located near the Nanping Pedestrian Street in downtown Kunming, this area is known for snack food such as rice noodles as well as Taiwanese and South Asia snacks. Nearby...

This elegantly decorated restaurant in a building with Kunming’s vintage architecture serves authentic Yunnan cuisine but at the same time has created a series of enjoyable dishes which are...

It is the former residence of Wang Jiuling, one of the founders of Yunnan University established in 1923. The site has been now serving as a restaurant on the... 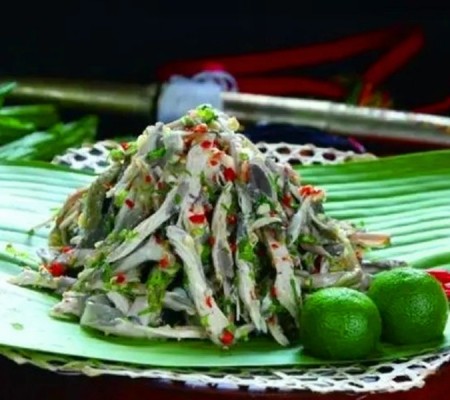 Kabana Italian Restaurant is a practical and popular western restaurant. The environment is comfortable, services are attentive, with quick dish-serving and high comprehensive price performance. Especially, Lasagna with Minced...

Golden Sun Italian Restaurant is a long-established western restaurant in Kunming. The environment here is quiet and tranquil, embracing both Chinese and western styles. Steaks and grilled chickens are...

Located in the hustle and bustle area of Wenhuaxiang, it is easy to find this exotic restaurant featuring Indian and Southeast Asian Cuisine. It offers popular Indian curry, famed...

If you ever felt not in the mood for some greasy food, then Su Ke vegetarian restaurant might be the right place for you. Located on the sixth floor...

If you are a big fan of comic or anime then you should not miss this restaurant. When you first step into Shi Man Qu you may think is...